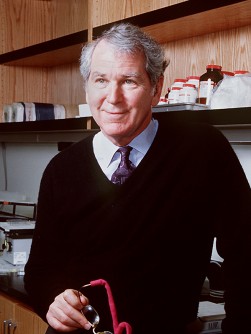 Joel N. Buxbaum, MD, is a professor at The Scripps Research Institute.

Newswise — LA JOLLA, CA—May 21, 2014—In surprise findings, scientists at The Scripps Research Institute (TSRI) have discovered that a protein with a propensity to form harmful aggregates in the body when produced in the liver protects against Alzheimer’s disease aggregates when it is produced in the brain. The results suggest that drugs that can boost the protein’s production specifically in neurons could one day help ward off Alzheimer’s disease.

“This result was completely unexpected when we started this research,” said TSRI Professor Joel N. Buxbaum, MD. “But now we realize that it could indicate a new approach for Alzheimer’s prevention and therapy.”

Buxbaum and members of his laboratory report their latest finding in the May 21, 2014 issue of the Journal of Neuroscience.

The study centers on transthyretin (TTR), a protein that is known to function as a transporter, carrying the thyroid hormone thyroxine and vitamin A through the bloodstream and cerebrospinal fluid. To do this job, it must come together in a four subunit structure called a tetramer. Certain factors such as old age and TTR gene mutations can make these tetramers prone to fall apart and misfold into tough aggregates called amyloids. TTR amyloids accumulate in the heart, kidneys, peripheral nerves and other tissues and cause life-shortening diseases including familial amyloid polyneuropathy and senile systemic (cardiac) amyloidosis. Starting in the mid 1990s, however, reports from several laboratories hinted that TTR in the brain might protect against other amyloids—particularly the Alzheimer’s-associated protein amyloid beta. In test tube experiments, TTR seemed able to grab hold of amyloid beta and prevent it from aggregating. In transgenic “Alzheimer’s mice,” which overproduce amyloid beta, TTR expression was increased in affected brain tissue, compared to control mice, as one would expect from a protective response.

“I didn’t really believe those reports at the time,” Buxbaum said.

But he was working on TTR amyloidoses and had the tools needed to investigate the issue genetically. He and his colleagues at TSRI did those experiments, and found, to their surprise, that overproducing TTR in “Alzheimer’s mice” did indeed protect the animals: it reduced their memory deficits as well as the accumulations of amyloid beta aggregates in their brains. Since that 2008 study, Buxbaum and colleagues have gone on to publish additional experiments examining the mechanism of the protection including two last year, in collaboration with the Wright and Kelly laboratories at TSRI and Roberta Cascella in Florence, that showed how TTR tetramers can bind to amyloid beta and inhibit the latter from forming the more harmful types of aggregate.

In the latest study, Buxbaum and his team, including lead authors Xin Wang and Francesca Cattaneo, at the time both postdoctoral fellows in the Buxbaum laboratory, found another key piece of evidence for TTR’s protective role.

TTR is known to be produced principally in the liver and in the parts of the brain where cerebrospinal fluid is made. Prior studies in the Buxbaum group found evidence that TTR can also be produced in neurons, albeit at low levels. Still, it has remained unclear how TTR production, in neurons or in other cells, would be increased in response to amyloid beta accumulation.

To start, the team analyzed a segment of DNA near the TTR gene called the promoter region, where, in principle, special DNA-binding proteins called transcription factors could increase TTR gene activity. The analysis suggested that Heat Shock Factor 1 (HSF1), known as a master switch for a broad protective response against certain types of cellular stress, could bind to the TTR gene’s promoter.

Further experiments showed that HSF1 does indeed bind to this region and that two known stimulators of HSF1—heat and a compound called celastrol—also boost HSF1 binding to the TTR promoter, in addition to boosting TTR production. Remarkably, though, the researchers found that HSF1’s dialing-up of TTR production seemed to occur only in neuronal-type cells, not in liver cells where most TTR is produced.

In fact, the researchers found that in liver cells the HSF1 response somehow brought about a modest decrease in TTR production. That result may seem puzzling, but it is consistent with the idea that liver-cell TTR, which is produced at 15 to 20 times the levels of neuronal TTR, is more likely to be hazardous than protective.

“It’s becoming more and more evident in biology that the same molecule can do very different things in different contexts,” Buxbaum said.

To underscore the relevance to Alzheimer’s, his team examined neurons from the hippocampus brain region in ordinary lab mice and in amyloid-beta-overproducing Alzheimer’s mice. Again consistent with the concept of TTR as protective in neurons, they found that the frequency of HSF1 binding to the TTR gene promoter, and the numbers of resulting TTR gene transcripts, were both doubled in the Alzheimer’s mice compared to the ordinary lab mice.

Buxbaum and his colleagues plan to do further research on this apparent TTR-mediated stress response in neurons to determine, among other things, precisely how Alzheimer’s-associated amyloid beta switches it on. But they have already begun to think about developing a small molecule compound, suitable for delivery in a pill, that at least modestly boosts HSF1 activity and/or TTR production in neurons—and thus might prevent or delay Alzheimer’s dementia.

Other contributors to the study, “The Systemic Amyloid Precursor Transthyretin (TTR) Behaves as a Neuronal Stress Protein Regulated by HSF1 in SH-SY5Y Human Neuroblastoma Cells and APP23 Alzheimer’s Disease Model Mice,” were Lisa Ryno, John Hulleman and Natàlia Reixach, all of TSRI at the time of the study. See http://www.jneurosci.org/content/34/21/7253.abstract

The study was funded in part by the National Institutes of Health (AGR01030027).