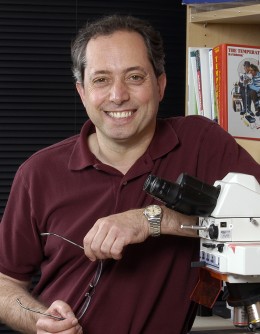 Pietro Paolo Sanna, MD, is an associate professor at The Scripps Research Institute.

Newswise — LA JOLLA, CA – August 27, 2014 – Scientists at The Scripps Research Institute (TSRI) have solved the mystery of why a specific signaling pathway can be associated with alcohol dependence.

This signaling pathway is regulated by a gene, called neurofibromatosis type 1 (Nf1), which TSRI scientists found is linked with excessive drinking in mice. The new research shows Nf1 regulates gamma-aminobutyric acid (GABA), a neurotransmitter that lowers anxiety and increases feelings of relaxation.

“This novel and seminal study provides insights into the cellular mechanisms of alcohol dependence,” said TSRI Associate Professor Marisa Roberto, a co-author of the paper. “Importantly, the study also offers a correlation between rodent and human data.”

In addition to showing that Nf1 is key to the regulation of the GABA, the research, which was published recently in the journal Biological Psychiatry, shows that variations in the human version of the Nf1 gene are linked to alcohol-dependence risk and severity in patients.

Pietro Paolo Sanna, associate professor at TSRI and the study’s corresponding author, was optimistic about the long-term clinical implications of the work. “A better understanding of the molecular processes involved in the transition to alcohol dependence will foster novel strategies for prevention and therapy,” he said.

Researchers have long sought a gene or genes that might be responsible for risk and severity of alcohol dependence. “Despite a significant genetic contribution to alcohol dependence, few risk genes have been identified to date, and their mechanisms of action are generally poorly understood,” said TSRI Staff Scientist Vez Repunte-Canonigo, co-first author of the paper with TSRI Research Associate Melissa Herman.

This research showed that Nf1 is one of those rare risk genes, but the TSRI researchers weren’t sure exactly how Nf1 affected the brain. The TSRI research team suspected that Nf1 might be relevant to alcohol-related GABA activity in an area of the brain called the central amygdala, which is important in decision-making and stress- and addiction-related processes.

“As GABA release in the central amygdala has been shown to be critical in the transition from recreational drinking to alcohol dependence, we thought that Nf1 regulation of GABA release might be relevant to alcohol consumption,” said Herman.

The team tested several behavioral models, including a model in which mice escalate alcohol drinking after repeated withdrawal periods, to study the effects of partially deleting Nf1. In this experiment, which simulated the transition to excessive drinking that is associated with alcohol dependence in humans, they found that mice with functional Nf1 genes steadily increased their ethanol intake starting after just one episode of withdrawal. Conversely, mice with a partially deleted Nf1 gene showed no increase in alcohol consumption.

In the second part of the study, a collaboration with a distinguished group of geneticists at various U.S. institutions, the team analyzed data on human variations of the Nf1 gene from about 9,000 people. The results showed an association between the gene and alcohol-dependence risk and severity.

The team sees the new findings as “pieces to the puzzle.” Sanna believes future research should focus on exactly how Nf1 regulates the GABA system and how gene expression may be altered during early development.