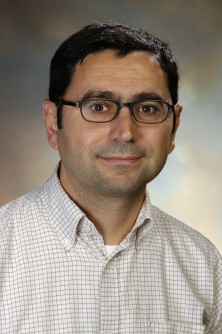 Newswise — LA JOLLA, CA—April 6, 2014—A study led by scientists at The Scripps Research Institute (TSRI) has helped solve a long-standing mystery about the sense of touch.

The “gentle touch” sensations that convey the stroke of a finger, the fine texture of something grasped and the light pressure of a breeze on the skin are brought to us by nerves that often terminate against special skin cells called Merkel cells. These skin cells’ role in touch sensation has long been debated in the scientific community. The new study, however, suggests a dual-sensor system involving the Merkel cell and an associated nerve end in touch sensation.

“In this long debate over the role of Merkel cells, it appears that both camps were right,” said the study’s senior author Ardem Patapoutian, a Howard Hughes Medical Institute (HHMI) Investigator and professor at TSRI’s Dorris Neuroscience Center and Department of Molecular & Cellular Neuroscience. “The nerve ends respond to touch, but so do the adjacent Merkel cells.”

The report appears in an Advance Online Publication of Nature on April 6, 2014.

In addition to elucidating the mammalian sense of touch, whose mechanisms until recently have been obscure, the findings could have relevance for certain pain syndromes in which touch sensations trigger pain—even the light pressure of a shirt on the skin or a breeze against the skin.

“Touch and pain are very closely related,” said Patapoutian, “and thus the characterization of these mechanisms of touch should help us to understand pain better too.”

The discovery comes four years after the Patapoutian laboratory identified a protein called Piezo2 as a mechanically activated “ion channel” protein with a likely role in touch sensation. Ion channels are embedded in the outer membranes of various cell types and nerve fibers throughout the body. Piezo2 ion channels have been thought to respond to the stretching of the nerve membrane where they are embedded—a stretching caused by something that presses against the skin, for example. When activated in this way, the ion channels open to allow an inflow of sodium or other positively charged ions. Such a surge of electrical charge into a nerve can initiate a signal that travels up the nerve and to the brain via a relay of neurons along the spine.

In the earlier study, Patapoutian’s team found evidence that Piezo2 proteins are made within touch-sensing neurons, including gentle-touch neurons that extend their nerves into the skin and against the mysterious Merkel cells.

In the new study, Patapoutian and his colleagues set out to learn more.

In Pursuit of Answers

The team began by creating a line of mice in which the activity of the Piezo2 gene also causes the production of a fluorescing protein called GFP. Guided by these fluorescent beacons as well as other markers, they found a high concentration of Piezo2 in Merkel cells in the skin of the mice.

“You can easily miss Piezo2 expression in the skin, because it’s not highly expressed there, aside from the tiny population of Merkel cells,” said first author Seung-Hyun Woo, a postdoctoral fellow in the Patapoutian laboratory.

Next the researchers sought proof of Piezo2’s role in Merkel cells, essentially by subtracting the protein from those cells and observing the result. To do this—a particularly challenging feat—they created a new line of mice in which the Piezo2 gene is specifically “knocked out” of all skin cells, including Merkel cells, but left intact everywhere else where it is ordinarily produced.

Piezo2 skin-knockout mice and their Merkel cells appeared normal. The mice also responded normally on most standard tests of touch and pain sensitivity. But on the so-called von Frey test, in which thin, bendable fibers are pressed against the mice’s paws with varying force, the effect of the loss of Piezo2 became apparent. “The mice whose Merkel cells lacked Piezo2 didn’t respond to the gentler forces as much as the control mice did,” said Woo. Examining this change in responsiveness in more detail, Woo and her colleagues isolated Merkel cells from the two groups of mice. They found that those Merkel cells lacking Piezo2 failed to show the usual current flows when gently pushed with a probe.

Collaborating researchers in the laboratory of Cheryl L. Stucky at the Medical College of Wisconsin showed that gentle touch-sensing nerves known as slowly adapting (SA) Aβ fibers generally responded with a lower frequency of signaling in the mice lacking Piezo2 in Merkel cells. Another collaborating laboratory, led by Ellen A. Lumpkin at Columbia University, showed that Merkel cell-associated nerves also responded less durably to test stimuli on skin in these same mice.

“It all shows that the Merkel cells play an important role in touch sensing and that they need Piezo2 to do so,” Woo said.

The findings were bolstered by a separate study from Lumpkin’s laboratory—of which Patapoutian is a co-author—that is reported in the same issue of Nature. In that study, mice engineered to lack Merkel cells exhibited touch-sensing deficits very similar to those described in the Patapoutian group’s study.

Other co-authors of the study, “Piezo2 is required for Merkel cell mechanotransduction,” were Sanjeev Ranade, Adrienne E. Dubin and Takashi Miyamoto of TSRI during the study, Andy D. Weyer of the Stucky Laboratory at the Medical College of Wisconsin, Yoshichika Baba of the Lumpkin Laboratory and Zhaozhu Qiu, Matt Petrus and Kritika Reddy of the Genomics Institute of the Novartis Research Foundation.