San Diego State alumnus Lalo Alcaraz, who acted as cultural consultant on the film, says the charming tale about Dia de Los Muertos could be a game-changer for diversity. 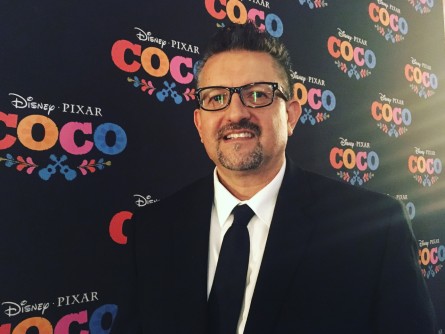 Disney-Pixar's animated feature film 'Coco' is shaking up the animated film industry, says Lalo Alcaraz, San Diego State alumnus and cultural consultant for the film. He is pictured at the Mexico premiere of 'Coco.'

Lalo Alcaraz, a San Diego State University alumnus who served as a cultural consultant for the film, worked alongside producer, Darla K. Anderson, who also went to San Diego State.

The film, which has grossed $740 million worldwide, tells the story of Miguel Rivera, a young boy who finds himself among his ancestors in the Land of the Dead on Dia de los Muertos, or Day of the Dead. San Jose State University playwriting alumnus Luis Valdez voiced the boy's uncle, Tío Berto.

Alcaraz, who graduated from San Diego State in 1987 with a bachelor's degree in art and environmental design, thinks the Academy's recognition could help transform the way animators and future filmmakers highlight and represent diversity in Hollywood.

Said Anderson during her Oscars acceptance speech: "'Coco' is proof that art can change and connect the world, and this can only be done when we have a place for everyone and anyone who feels like 'an other' to be heard."

We spoke with Alcaraz about working on the film and how San Diego State helped prepare him for his career.

Calstate.edu: Congratulations on an outstanding win! What might the success of "Coco" mean to future films, particularly animated films?

Lalo Alcaraz: I find that most major studio animated films just avoid characters of color as a rule and only use them as tokens, basically using only one or two in a whole project, if even that. Or they prefer to have animal characters over black and brown characters. And if they do include a Latino character in a story, there is no guarantee that a Latino would actually voice the role.

"[The success of "Coco"] means that studios might not be as leery of cultural stories, or movies where the majority of the characters are black or brown. And it definitely shows that a movie with Mexican/Latino characters can open a big movie around the world in foreign markets. That's a big deal.

​ Calstate.edu: What were you most excited about when you started working on this film?

Alcaraz: I wanted to ensure that it wasn't a whitewashed version of the Mexican culture, which is the standard Hollywood approach. Pixar had already moved miles toward authenticity before I came on board. We — the consultants —just sharpened the spear.

Calstate.edu: What does being a cultural consultant on a film entail?

Alcaraz: My role was to view the film in its various developing versions and give notes on the language, the dialogue, the music, the characters — anything and everything. [It was my role to] ensure authenticity and proper representation. I also got to advise on the merchandise and review lots of the different items, from clothing to games and toys, the DVD, and theme park attractions.

Calstate.edu: What is your favorite "Coco" scene?

Alcaraz: I love when the dementia-suffering Mama Coco's face lights up in recognition of her father's song. Tears shoot out of my eyes like a firehose. The biggest effect the film has had is unifying families and letting older viewers remember their parents who they may not have thought about in a while.

Calstate.edu: How did San Diego State help prepare you for the animated film industry and for this role?

Alcaraz: SDSU's College of Professional Studies and Fine Arts gave me the foundation to develop my artistic skills and also taught me how collaboration with others is valuable. My college experience in Movimiento Estudantil Chicao de Aztlan [at SDSU] gave me the social conscience to want to help my community. And editorial cartooning at The Daily Aztec taught me how the public reacts to strong political statements.

Calstate.edu: What advice might you offer to current students with aspirations to succeed in the art/animation industry?

Alcaraz: Draw every day, learn techniques of cinema and computer animation, but also get educated and learn how to write and express yourself intelligently! And then draw some more.

Calstate.edu: In your opinion, how can art change the world?

Alcaraz: Art wins hearts and minds every time. It is more effective than war.

Learn more about Alcaraz and Anderson's roles in "Coco."