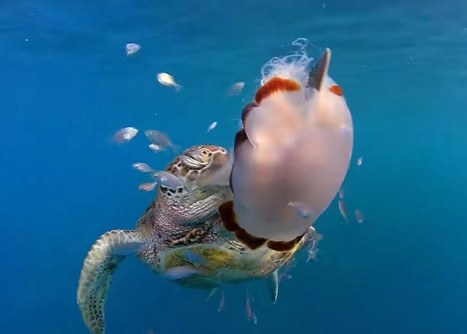 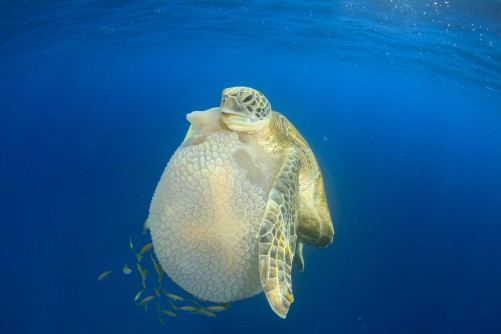 A green turtle holding a mosaic jellyfish (Thysanostoma thysanura) in the water column near the ocean surface in the Similan Islands, Thailand, taken June 2017

Newswise — March 28, 2018; Monterey, Calif. – Sea turtles use their flippers to handle prey despite the limbs being evolutionarily designed for locomotion, a discovery by Monterey Bay Aquarium researchers published today in PeerJ.

The in-depth examination of the phenomenon – Limb-use By Foraging Sea Turtles, an Evolutionary Perspective – by authors Jessica Fujii and Dr. Kyle Van Houtan and others reveals a behavior thought to be less likely in marine tetrapods is actually widespread and that this type of exaptation of flippers may have been occurring 70 million years earlier than previously thought.

“Sea turtles don’t have a developed frontal cortex, independent articulating digits or any social learning,” says Van Houtan, Director of Science at Monterey Bay Aquarium. “And yet here we have them ‘licking their fingers’ just like a kid who does have all those tools. It shows an important aspect of evolution – that opportunities can shape adaptations.”

Lead author Jessica Fujii is part of the Aquarium’s sea otter research team where she specializes in ecomorphology—the intersection of evolution, behavior and body form. Fujii’s expertise in sea otter foraging and tool use behavior has influenced her recent examination of sea turtles and how they have evolved to use their limbs in novel ways.

Analysis by Fujii and Van Houtan using crowd-sourced photos and videos finds widespread examples of behaviors such as a green turtle holding a jelly, a loggerhead rolling a scallop on the seafloor and a hawksbill pushing against a reef for leverage to rip an anemone loose. Similar behaviors have been documented in marine mammals from walruses to seals to manatees – but not in sea turtles. The paper shows that sea turtles are similar to the other groups in that flippers are used for a variety of foraging tasks (holding, bracing, corralling).

“Sea turtles’ limbs have evolved mostly for locomotion, not for manipulating prey,” Fujii says. “But that they’re doing it anyway suggests that, even if it’s not the most efficient or effective way, it’s better than not using them at all.”The finding came as a surprise to the authors, given sea turtles’ ancient lineage and the fact that the reptiles are considered to have simple brains and simple flippers. The results also offer an insight into the evolution of four-limbed ocean creatures that raises questions about which traits are learned and which are hardwired.

“We expect these things to happen with a highly intelligent, adaptive social animal,” Van Houtan says. “With sea turtles, it’s different; they never meet their parents,” Kyle says. “They’re never trained to forage by their mom. It’s amazing that they’re figuring out how to do this without any apprenticing, and with flippers that aren’t well adapted for these tasks.”

The study may also help inform the aquarium’s ongoing sea otter research. How developmental biology predisposes animals to adopt dining strategies is of particular interest, given the aquarium’s efforts to raise stranded sea otter pups and prepare them for a return to the wild. Rearing and releasing stranded pups contributes to the aquarium’s work to recover California’s threatened sea otter population.

Before they’re released, ecologically naïve pups have to be taught foraging behaviors, be it for crabs or abalone, by adult female sea otters at the aquarium, which serve as surrogate mothers to the pups.

The paper is available now at https://peerj.com/articles/4565

Link to the Published Version of the article (quote this link in your story – the link will ONLY work after the embargo lifts): https://peerj.com/articles/4565 your readers will be able to freely access this article at this URL.

Monterey Bay Aquarium: The mission of the nonprofit Monterey Bay Aquarium is to inspire conservation of the ocean. It is the most respected public aquarium in North America, and an innovator in living exhibits, public programs and social media–engaging nearly two million visitors a year and millions more around the world. It is a leader in science education, creating programs for young people and the adults who guide them as it nurtures a new generation of science-literate, conservation-minded young people to tackle the environmental challenges of the 21st century. And it is an influential global voice for ocean conservation, combining active programs in marine science, with policy initiatives and public outreach to secure the future of the ocean. Its science is the foundation for the sustainable seafood movement worldwide, and integrated with its policy and outreach programs, is shaping a sustainable future for global fisheries and aquaculture. Learn more at montereybayaquarium.org.

PeerJ is an Open Access publisher of two peer-reviewed journals and a preprint server. PeerJ’s mission is to help the world efficiently publish its knowledge. All works published by PeerJ are Open Access and published using a Creative Commons license (CC-BY 4.0). PeerJ is based in San Diego, CA and the UK and can be accessed at peerj.com

PeerJ has an Editorial Board of over 1,900 respected academics, including 5 Nobel Laureates. PeerJ was the recipient of the 2013 ALPSP Award for Publishing Innovation. PeerJ Media Resources (including logos) can be found at: peerj.com/about/press 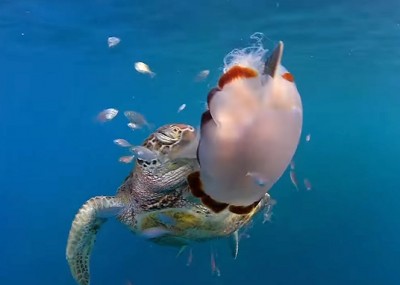 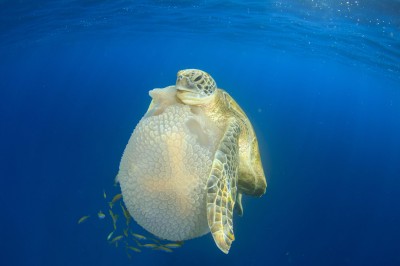 Caption: A green turtle holding a mosaic jellyfish (Thysanostoma thysanura) in the water column near the ocean surface in the Similan Islands, Thailand, taken June 2017