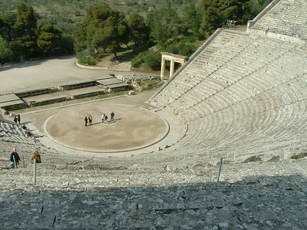 The Theater at Epidaurus on the Peloponnese in Greece

Newswise — As the ancient Greeks were placing the last few stones on the magnificent theater at Epidaurus in the fourth century B.C., they couldn't have known that they had unwittingly created a sophisticated acoustic filter. But when audiences in the back row were able to hear music and voices with amazing clarity (well before any theater had the luxury of a sound system), the Greeks must have known that they had done something very right because they made many attempts to duplicate Epidaurus' design, but never with the same success.

Researchers at the Georgia Institute of Technology have pinpointed the elusive factor that makes the ancient amphitheater an acoustic marvel. It's not the slope, or the wind — it's the seats. The rows of limestone seats at Epidaurus form an efficient acoustics filter that hushes low-frequency background noises like the murmur of a crowd and reflects the high-frequency noises of the performers on stage off the seats and back toward the seated audience member, carrying an actor's voice all the way to the back rows of the theater.

The research, done by acoustician and ultrasonics expert Nico Declercq, an assistant professor in the Woodruff School of Mechanical Engineering at Georgia Tech and Georgia Tech Lorraine in France, and Cindy Dekeyser, an engineer who is fascinated by the history of ancient Greece, appears in the April issue of the Journal of the Acoustics Society of America.

While many experts speculated on the possible causes for Epidaurus' acoustics, few guessed that the seats themselves were the secret of its acoustics success. There were theories that the site's wind — which blows primarily from the stage to the audience — was the cause, while others credited masks that may have acted as primitive loudspeakers or the rhythm of Greek speech. Other more technical theories took into account the slope of the seat rows.

When Declercq set out to solve the acoustic mystery, he too had the wrong idea about how Epidaurus carries performance sounds so well. He suspected that the corrugated, or ridged, material of the theater's limestone structure was acting as a filter for sound waves at certain frequencies, but he didn't anticipate how well it was controlling background noise.

"When I first tackled this problem, I thought that the effect of the splendid acoustics was due to surface waves climbing the theater with almost no damping," Declercq said. "While the voices of the performers were being carried, I didn't anticipate that the low frequencies of speech were also filtered out to some extent."

But as Declercq's team experimented with ultrasonic waves and numerical simulations of the theater's acoustics, they discovered that frequencies up to 500 Hz were held back while frequencies above 500 Hz were allowed to ring out. The corrugated surface of the seats was creating an effect similar to the ridged acoustics padding on walls or insulation in a parking garage.

So, how did the audience hear the lower frequencies of an actor's voice if they were being suppressed with other background low frequencies? There's a simple answer, said Declercq. The human brain is capable of reconstructing the missing frequencies through a phenomenon called virtual pitch. Virtual pitch helps us appreciate the incomplete sound coming from small loudspeakers (in a laptop or a telephone), even though the low (bass) frequencies aren't generated by a small speaker.

The Greeks' misunderstanding about the role the limestone seats played in Epidaurus' acoustics likely kept them from being able to duplicate the effect. Later theaters included different bench and seat materials, including wood, which may have played a large role in the gradual abandonment of Epidaurus' design over the years by the Greeks and Romans, Declercq said.

The Journal of the Acoustics Society of America (Apr-2007)