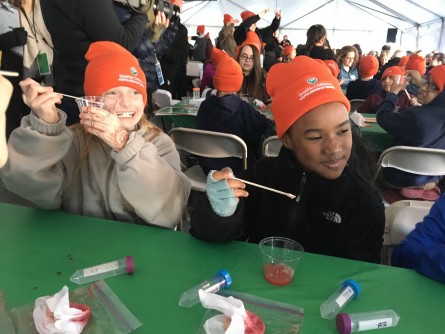 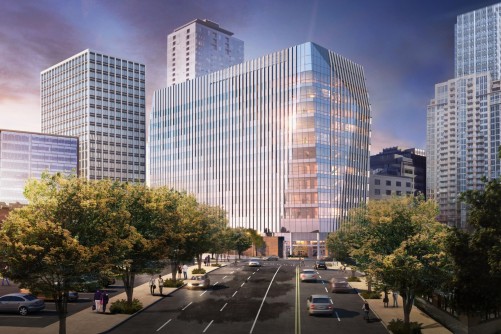 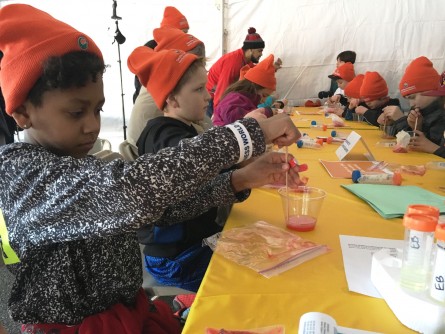 Newswise — (SEATTLE—Feb. 2, 2017) Seattle Children’s Research Institute succeeded in a GUINNESS WORLD RECORDS attempt for most people conducting a DNA isolation experiment simultaneously. The record was set to celebrate the groundbreaking for Seattle Children’s newest pediatric research facility, Building Cure, which will be located in Seattle’s South Lake Union biotech corridor at 1920 Terry Ave. It is scheduled to open in 2019.

“We set this record with the support of the community, from policymakers to elementary school students, and we’re honored to have everyone here to celebrate the future of pediatric research in Seattle,” said Dr. Jim Hendricks, president of Seattle Children’s Research Institute. “Building Cure allows researchers to conduct life-changing pediatric research. We also designed spaces for young people to do hands-on science with expanded STEM education programming.”

The GUINNESS WORLD RECORDS title was set by more than 300 people at the building’s future location. Several hundred volunteer participants isolated the DNA of a strawberry simultaneously.

“This community-based DNA experiment ushers Seattle’s pediatric research into a new era that will bring innovative therapies to children around the globe,” said Dr. Jeff Sperring, CEO of Seattle Children’s. “We want this building to be a forum for scientific dialogue and we have planned thoughtful public spaces for neighbors and visitors to enjoy.”

The new building will add 540,000 square feet to the research institute, much of which will be dedicated to labs, bringing the total square footage of the research institute to more than 1 million square feet. The facility will house a new therapeutic cell processing core called the Cure Factory that will translate lab discoveries into patient treatments, with a focus on cancer immunotherapy and cell therapies for immune conditions such as type 1 diabetes and sickle cell disease. Building Cure will allow Seattle Children’s to increase production for cancer immunotherapy trials. The Cure Factory will be able to manufacture cancer immunotherapy treatment products for up to 1,000 children each year using the PLAT-02 acute lymphoblastic leukemia (ALL) research protocol or other research protocols. That’s more than six times the current capacity of 150 treatments per year.

The Ben Towne Center for Childhood Cancer Research, currently at 1100 Olive Way, will be relocated to Building Cure.

In addition, the new facility will feature a museum, auditorium and classrooms. STEM education and student learning is a major focus of the new building, which will feature programming for young students to be part of hands-on scientific research.

About Seattle Children’sSeattle Children’s mission is to provide hope, care and cures to help every child live the healthiest and most fulfilling life possible. Together, Seattle Children’s Hospital, Research Institute and Foundation deliver superior patient care, identify new discoveries and treatments through pediatric research, and raise funds to create better futures for patients.