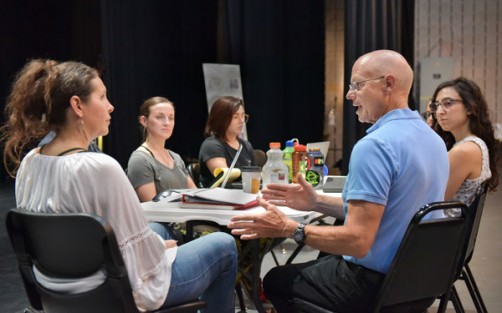 Retired Sandia National Laboratories physicist Pace VanDevender, second from right, talks to Shira Greenberg, left, founder and artistic director of Keshet Dance and Center for the Arts, and members of her staff. The group is developing a dance performance that blends art and science. 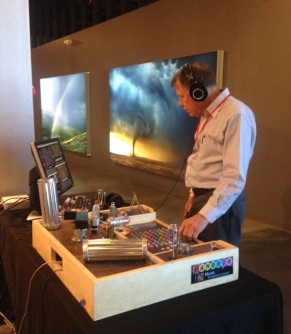 Sandia National Laboratories retiree Mike Murphy checks the sound at a demonstration in Albuquerque of the PanMuse computer-based music system Bandojo. Murphy, an electrical engineer, and two other Sandia retirees helped PanMuse create a physical touch-sensing system for the product.

Newswise — ALBUQUERQUE, N.M. — Retirement means different things to different people. To Mike Murphy it wasn’t about TV and golf, not after logging 40 years as an electrical engineer in the nuclear weapons program at Sandia National Laboratories. He wanted to put his experience to work.

Murphy, who retired in 2009, was running his family’s cattle ranch when he got a call from a former Sandia colleague, Ron Moya, who asked if he could help an Albuquerque small business, PanMuse LLC, develop a unique computer-based music system. PanMuse needed technical advice on touch-sensor optimization.

Murphy didn’t hesitate. “It was right up my alley,” he said. “I never wanted to be an idle retiree. I have a lot of knowledge and want to be useful. Helping a small company with a technical problem sounded like the right thing to do.”

Moya is a founder of Technology Retirees Economic Catalysts (TREC), established in 2015 to connect Sandia retirees with small businesses that need technical and other expertise.

“A lot of intellectual capital leaves Sandia when people retire,” he said. “Many of them want to use their expertise, to contribute.”

“I called a few of my friends and the ball got rolling,” Moya said.

His first call was to electrical engineer Larry Walker, the second was to engineer Margie Tatro, then came human resources specialist Barbara “BJ” Jones, engineer Art Ratzel, Hal Morgan, who worked in engineering sciences and tech transfer, and Murphy. Along with Hunter, they formed the TREC steering committee and developed a business plan. They networked in the business community to introduce their service.

Wealth of talent, need for expertise

The steering committee is building a list of Sandia retirees willing to consult as volunteers with small businesses.

“We’re a matchmaker,” Morgan said. “When a business needs help, we reach out to the Sandia retiree community and find someone.”

When Technology Ventures closed in May 2017, TREC found a new home and sponsor at the Women’s Economic Self Sufficiency Team, a statewide nonprofit that offers consulting, training, lending and business incubation to people starting or growing a business. The self-sufficiency team serves thousands of clients a year and offers TREC meeting space, referrals and a website.

“We are always looking for resources for our clients, and TREC is a great fit,” said Julianna Silva, managing director of the team’s Enterprise Center. “We share a lot of the same goals. The alliance gives our clients a direct link to the resources TREC brings to the community.”


Shira Greenberg, founder and artistic director of Keshet Dance and Center for the Arts in Albuquerque, asked TREC for help when she began developing a dance performance that would blend art and science. She was paired with Pace VanDevender, a renowned physicist, Sandia vice president emeritus and former director of pulsed-power sciences.

“I almost didn’t believe it when he walked in the door,” Greenberg said. “Who would have thought that we could work with a scientist of his stature on our dance project? It’s a unique and rare opportunity and just as amazing as you might imagine. Pace blows our minds every time we meet with him. This dream of ours will be fantastic because of him.”

VanDevender enjoys collaborating with the young artists and bringing a new dimension to his work in physics.

“It’s an entirely new realm and way of thinking but it turns out the creative process is the same in science and dance: preparation, incubation, illumination and implementation,” he said. “It’s been a terrific experience for all of us.”

As TREC grows, Moya envisions an organization that is recognized in the small-business and startup communities as a research and development and business resource. He would like to involve retirees from other technical institutions and universities, such as the Air Force Research Laboratory, Los Alamos National Laboratory and the University of New Mexico.

“Several TREC members were involved in technology transfer at the labs and continue to be passionate about helping companies succeed,” she said.

PanMuse, the computer-based musical instrument company, is developing a system that lets people of varying physical and cognitive abilities play music using a wide range of physical and computer-related devices. One example is of the physical interface is a dinner setting; music is made by touching goblets, plates, silverware, copper flowers and real fruit in a bowl.

The physical interfaces rely on touch technology, and the company was experiencing problems with unpredictable sensor activity. PanMuse needed assistance in calibrating and optimizing the sensors and the housing of electrodes and electronics.

Maynes and PanMuse’s CEO, Panaiotis, reached out to TREC and received help from Murphy and Walker, both electrical engineers, and manufacturing process engineer Phil Gallegos. They worked with PanMuse to optimize and calibrate the physical touch-sensing system.

Panaiotis is a composer and software developer who developed the PanMuse music software. Maynes is a computer scientist who, among other things, develops the physical device interfaces.

“Larry, Michael and Phil were instrumental in making the capacitive touch-sensing robust,” Maynes said. “They worked with us to understand the data filtering algorithms for the touch-sensing, like you’d use on a smartphone screen. It was a pleasure and a boon to work with them.”

Murphy said it felt good to be part of the PanMuse business. And there was a bonus. For years Murphy has played violin and mandolin in an Irish band but had no formal music training.

“Working with them has taught me a lot about music,” he said. “I’m a better musician now.”