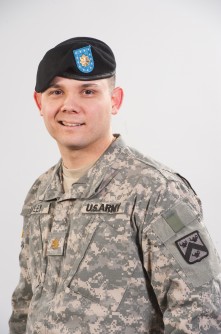 David Oakley, a doctoral student in security studies at Kansas State University and a military officer, is researching the intelligence community in the U.S. government, particularly the changing relationship between the DOD and CIA.

Newswise — MANHATTAN, KANSAS — A Kansas State University doctoral student is studying how the country has benefited from the CIA and the Department of Defense partnering together since 9/11. The research provides future insight in a time of budget cuts.

David Oakley, a doctoral student in security studies and a military officer, Wichita, is researching the intelligence community in the U.S. government, particularly the changing relationship between the DOD and CIA.

"It's important to look at this partnership, because at a time when we are making cuts both within the Department of Defense and the intelligence community, people could start cutting back on opportunities to partner and operate together," Oakley said. "They could start focusing on their own house because of limited funds. If that's the case, then the amount of money that we have spent since 9/11 will have been wasted because we will have lost the positive partnerships."

For his project, Oakley performed extensive research and interviewed administrators and leaders in both the CIA and DOD. His research shows how the country has benefited from an evolving partnership between the CIA and the DOD since the 9/11 terrorist attacks.

"After 9/11, the CIA and the DOD became very familiar with each other," Oakley said. "Before that, there was always a connection on some level, but it wasn't as great as it is now.

While both the CIA and the DOD grew out of World War II's Office of Strategic Services, each group developed its own identify and culture, Oakley noted. During the Cold War, the military and the CIA partnered and were jointly focused on a common enemy: the Soviet Union, Oakley said. The relationship changed at the end of the Cold War and the end of the Gulf War.

"We lost the big, bad bear," Oakley said. "We often define ourselves by the other, by our enemy. When we lost that enemy, the organizations that had been built up to focus on that enemy had to redefine themselves."

After the Gulf War, different organizational structures were created to build the partnership, but there were few operations where the CIA and the DOD interacted with each other, Oakley said. The 9/11 attacks changed everything by providing a common purpose for the two organizations.

"When 9/11 occurred, the U.S. found a new identify," Oakley said. "We found a new enemy in global terrorism. It gave a focus area for both organizations."

After 9/11, the CIA-DOD interaction occurred on the battlefield and at the junior and senior level of officers, Oakley said. CIA case officers were interacting more with soldiers on the ground in Iraq and Afghanistan. The relationship has continued to present day and helped the government to run more efficiently.

"The more you know about the other organization, the less inclined you are to be parochial and the more willing you are to work with each other," Oakley said. "Familiarity, understanding and appreciation of each other have eroded the parochialism between the CIA and the DOD."

"Once we say the CIA's main role is to support the commander, then it could become problematic because they would just be building a case for the commanding officer," Oakley said. "It can be good if intelligence officers disagree. If we try to get everyone in agreement, then we could have intelligence failures because everyone is speaking the same party lines. It is important to have different perspectives."

Oakley's research is featured in the Joint Special Operations University Report "Partners or competitors?: The evolution of the Department of Defense/Central Intelligence Agency relationship since Desert Storm and its prospects for the future," and in the article "Adapting to change: Strategic turning points and the CIA/DOD relationship," which was published in the InterAgency Journal.