Seismic Performance of a Building Subjected to Intermediate Seismic Shaking 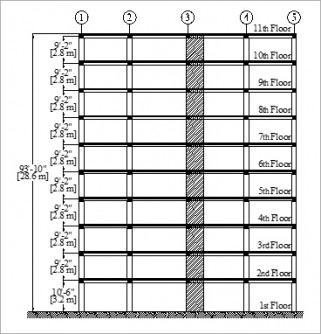 Fig.––Elevation view of the building 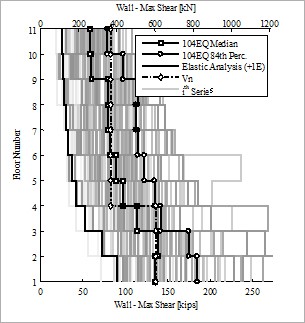 Seismic Performance of a Building Subjected to Intermediate Seismic Shaking

by Carlos A. Arteta and Jack P. Moehle

Newswise — Although vast regions of the United States and other parts of the world can be classified informally as being regions of moderate or intermediate seismic risk, few studies examine the safety of buildings constructed in these areas. This study evaluates the expected behavior of a 10-story reinforced concrete building with intermediate moment frames and ordinary wall under design-level seismic shaking. The seismic demand on the building was estimated following ASCE 7 procedures for an intermediate seismic hazard site. The structural system was assigned Seismic Design Category C and was designed and detailed following ACI 318-11 provisions.

For the study, a suite of 52 pairs of unscaled earthquake ground motions was selected to represent design level shaking. The 5 percent damped spectral accelerations of the selected ground motions have median values that approximate the elastic design response spectrum, as well as the Campbell and Bozorgnia (2007) attenuation relationships for intermediate seismic hazard scenarios as defined in NSR-10 (for example, 0.1g < PGA ≤ 0.2g). Nonlinear analyses were used to assess the expected behavior of the case-study building under the representative earthquake ground motions. The software package Open System for Earthquake Engineering Simulation, OpenSees, was selected for this purpose because its nonlinear analyses capabilities have been demonstrated by many researchers and because it facilitated conducting a large number of simulations. Beams, columns, and walls were modeled using distributed plasticity elements and fiber sections at the integration points. The fiber sections represent cyclic, uniaxial stress-strain relationships for the different materials in every section.

Results of the study enabled comparison of the expected performance of a code-compliant structure and actual performance as represented by the numerical model. It was concluded that the prescriptive code-based approach can lead to critical underestimation of seismic demands. Of particular concern were the anticipated shear forces, which for some key structural components are beyond the design capacities. Coupled with structural detailing employed in these structures, the results indicate a high potential for relatively brittle failures in some key components during design-level shaking.

Overall, the study is significant to professional practice and building code development because it provides a perspective on the effectiveness of building code design provisions and on opportunities for improvement.

ACI member Carlos A. Arteta, is Professor of Civil Engineering at Universidad del Norte, Barranquilla, Colombia. He received his BS from Universidad del Norte; and M.Eng., and Ph.D. from the University of California, Berkeley. He is an Associate Member of ACI Committee 374. His research interests include the design and behavior of concrete structures and earthquake engineering.

Jack P. Moehle, FACI, is the Ed and Diane Wilson Professor of Structural Engineering at the University of California, Berkeley. A past member of the ACI Board of Directors and Technical Activities Committee, he currently is Chair of ACI Committee 318.

The research can be found in a paper titled “Seismic Performance of a Building Subjected to Intermediate Seismic Shaking” published by ACI Structural Journal.