Indoor air pollution in your home or office can cause health issues like dizziness, asthma or allergies. The most common solution is to install ventilation systems. But researchers may have found a cheaper, simpler option to remove indoor air pollutants: houseplants. 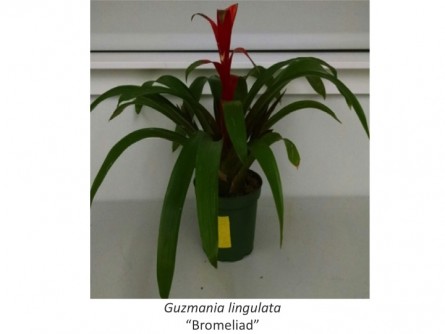 Bromeliad plants are good at removing a wide variety of VOCs from the air.

EMBARGOED FOR RELEASE: Wednesday, Aug. 24, 2016, 5 a.m. Eastern Time Note to journalists: Please report that this research will be presented at a meeting of the American Chemical Society. A press conference on this topic will be held Wednesday, Aug. 24, at 10:30 a.m. Eastern time in the Pennsylvania Convention Center. Reporters may check in at Room 307 in person, or watch live on YouTube http://bit.ly/ACSlivephiladelphia. To ask questions online, sign in with a Google account.

Newswise — PHILADELPHIA, Aug. 24, 2016 — Indoor air pollution is an important environmental threat to human health, leading to symptoms of “sick building syndrome.” But researchers report that surrounding oneself with certain house plants could combat the potentially harmful effects of volatile organic compounds (VOCs), a main category of these pollutants. Interestingly, they found that certain plants are better at removing particular harmful compounds from the air, suggesting that, with the right plant, indoor air could become cleaner and safer.

The researchers are presenting their work today at the 252nd National Meeting & Exposition of the American Chemical Society (ACS). ACS, the world’s largest scientific society, is holding the meeting here through Thursday. It features more than 9,000 presentations on a wide range of science topics. A brand-new animation on the research is available at http://bit.ly/ACSindoorairpollution.

“Buildings, whether new or old, can have high levels of VOCs in them, sometimes so high that you can smell them,” says Vadoud Niri, Ph.D., leader of the study.

VOCs are compounds like acetone, benzene and formaldehyde that are emitted as gases and can cause short- and long-term health effects when inhaled. They can come from paints, furniture, copiers and printers, cleaning supplies and even dry-cleaned clothes.

“Inhaling large amounts of VOCs can lead some people to develop sick building syndrome, which reduces productivity and can even cause dizziness, asthma or allergies,” Niri says. “We must do something about VOCs in indoor air.”

The most common solution is to install ventilation systems that cycle in air from outside. There are also methods that can remove these compounds, using adsorption, condensation and chemical reactions.

However, Niri is studying a cheap, simple tool to remove VOCs: house plants. Using plants to remove chemicals from indoor air is called biofiltration or phytoremediation. In addition to carbon dioxide, plants can take up gases such as benzene, toluene and other VOCs. NASA began studying this option in 1984 and found that plants could absorb these airborne compounds via their leaves and roots.

Since then, other studies have looked at how plants phytoremediate specific compounds, such as the carcinogen formaldehyde, in a closed space. Most of these studies focused on the removal of single VOCs by individual plants from the ambient air. However, Niri wanted to compare the efficiency and the rate of simultaneous removal of several VOCs by various plants.

To test this, Niri, who is at the State University of New York at Oswego (SUNY Oswego), and his team built a sealed chamber containing specific concentrations of several VOCs. They then monitored the VOC concentrations over several hours with and without a different type of plant in the chamber. For each plant type, they noted which VOCs the plants took up, how quickly they removed these VOCs from the air, and how much of the VOCs were ultimately removed by the end of the experiment.

The researchers tested five common house plants and eight common VOCs, and they found that certain plants were better at absorbing specific compounds. For example, all five plants could remove acetone — the pungent chemical that is abundant at nail salons — from the air, but the dracaena plant took up the most, around 94 percent of the chemical.

“Based on our results, we can recommend what plants are good for certain types of VOCs and for specific locations,” Niri says. “To illustrate, the bromeliad plant was very good at removing six out of eight studied VOCs — it was able to take up more than 80 percent of each of those compounds — over the twelve-hour sampling period. So it could be a good plant to have sitting around in the household or workplace.”

Niri says the next step in the research is to test these plants’ abilities in a real room, not just a sealed chamber. He would eventually like to put plants in a nail salon over the course of several months to see whether they can reduce the levels of acetone that workers are exposed to.

Abstract Air pollution is one of the most important environmental threats to the health of the residents of all communities and volatile organic compounds (VOCs) are among important air pollutants. These compounds are ubiquitous in the natural and industrialized world but are found in the highest concentrations in indoor environments. Some of the chemicals belonging to this group are benign to human health, or even necessary for normal physiological function, however a substantial proportion of VOCs are detrimental to human health with effects ranging from dizziness and nausea to central nervous system damage, various forms of cancer, and even death. Because of the serious nature of VOCs as a health hazard, many remediation techniques are being developed. Phytoremediation, the use of plants to mitigate environmental pollution, offers one of the most practical solutions in terms of cost and efficacy.

Using solid phase microextraction (SPME) coupled with gas chromatography-mass spectrometry (GC/MS), this project aimed to monitor the removal of volatile organic compounds (VOC’s) by common indoor plants. Five common plants were selected for this study including Crassula argentea (Jade Plant), Chlorophytum comosum (Spider Plant), Guzmania lingulata (Bromeliad), Consolea falcata (Caribbean Tree Cactus), and Dracaena fragrans (Dracaena). Three treatment conditions were applied to each plant to isolate active VOC uptake mechanisms; covering the base of the plant in foil, no foil, and the use of a light. Of the five plants; Guzmania lingulata showed the greatest overall VOC uptake in light treatment conditions with more than 80% removal of six of the eight target VOC compounds over a twelve-hour sampling period. All tested plants showed less than 50% removal of dichloromethane or trichloromethane over the twelve-hour sampling period.