Selenide Protects Heart Muscle in the Wake of Cardiac Arrest 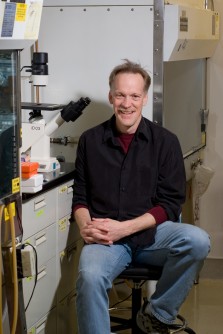 Newswise — SEATTLE – Damage to heart muscle from insufficient blood supply during cardiac arrest and reperfusion injury after blood flow is restored can be reduced by nearly 90 percent if selenide, a form of the essential nutrient selenium, is administered intravenously in the wake of the attack, according to a new preclinical study by researchers at Fred Hutchinson Cancer Research Center.

Mark Roth, Ph.D., and colleagues in the Fred Hutch Basic Sciences Division published their findings online in Critical Care Medicine.“We found that administration of selenide after the heart has been deprived of blood flow and before blood flow is restored significantly protects the heart tissue in a mouse model of acute myocardial infarction and reperfusion injury,” Roth said.

Ischemia, or insufficient blood supply, as occurs during a heart attack or stroke, causes tissues to become starved of oxygen. In the highly oxygenated tissues of the heart and brain, ischemia can cause irreversible damage in as little as three to four minutes at normal body temperature. Reperfusion injury is the tissue damage caused when blood supply returns to the tissue after a period of ischemia or lack of oxygen. The absence of oxygen and nutrients from blood during the ischemic period creates a condition in which the restoration of circulation results in inflammation and oxidative damage through the induction of oxidative stress rather than restoration of normal function.Using two different mouse models of ischemia reperfusion injury, Roth and colleagues found that selenium is specifically taken up by injured tissues following temporary loss of blood flow while blood selenium levels simultaneously decrease. “These results suggest there is a natural mechanism that targets selenide to recently reperfused tissue and protects it from injury,” Roth said.

To assess the role of the body’s naturally occurring selenide in tissue repair, the researchers conducted a series of experiments in a mouse model.

To determine whether the buildup of selenium in injured tissues could happen elsewhere in the body and not just in the heart, Roth and colleagues repeated the experiment in a mouse model in which blood flow was temporarily stopped in one of two hind limbs. In the first five minutes after blood flow was restored, they observed a five-fold increase in the amount of selenide in the injured limb as compared to the untreated limb.

“These results, along with prior understanding of selenium biology, show that endogenous, or naturally occurring, selenium is rapidly mobilized from the blood to help protect injured tissue after blood flow is restored,” Roth said. “This led us to wonder whether supplementing the body’s naturally occurring selenide with an infusion of selenide might further protect tissues after a heart attack once blood flow is restored.”

To test this, using a mouse model of heart attack, Roth and colleagues administered selenide just prior to restoring blood flow and found that it reduced heart damage by 88 percent. To determine the extent of heart-cell damage, the researchers tracked the levels of a heart-specific protein called cardiac troponin two hours after blood flow was restored. To assess the degree of inflammation, they measured neutrophil accumulation in heart tissue 24 hours after reperfusion.

“Both biomarkers were decreased in selenide-treated mice as compared to control mice, which provides compelling evidence that selenide improves tissue viability after heart attack,” Roth said.

As a final step, the researchers used echocardiography to measure heart function two days after inducing cardiac ischemia. The mice that received a dose of selenide after ischemia and prior to reperfusion had a statistically significant improvement in heart function.

The nutrient selenium is regarded as an essential element required for sustaining the health of bodily tissues such as heart muscle, and selenium deficiency is associated with heart disease. For example, in the 1970s it was discovered that a large region of China produced food grown in selenium-deficient soil. As a result, tens of thousands of residents, including many children, suffered from selenium deficiency and heart disease. Dietary supplementation with selenium throughout the region cured the epidemic.

In the clinical setting, decreased selenium levels are correlated with tissue injury. For example, in a study of intensive-care patients, blood selenium levels were reduced by as much as 50 percent compared to a healthy comparison group. Additional studies have found that selenium levels increase as patients heal from burns or systemic infection, which suggests that the body’s naturally occurring selenium may be redistributed during critical illness to target the injured tissue and enhance recovery.

Editor’s note: To obtain a copy of the Critical Care Medicine paper, “Selenide Targets to Reperfusing Tissue and Protects it From Injury,” or to arrange an interview with Roth, contact Kristen Woodward in Fred Hutch media relations at [email protected] or 206-667-5095.

FRED HUTCH: 40 YEARS OF CURES 1975-2015At Fred Hutchinson Cancer Research Center, home to three Nobel laureates, interdisciplinary teams of world-renowned scientists seek new and innovative ways to prevent, diagnose and treat cancer, HIV/AIDS and other life-threatening diseases. Fred Hutch’s pioneering work in bone marrow transplantation led to the development of immunotherapy, which harnesses the power of the immune system to treat cancer with minimal side effects. An independent, nonprofit research institute based in Seattle, Fred Hutch houses the nation’s first and largest cancer prevention research program, as well as the clinical coordinating center of the Women’s Health Initiative and the international headquarters of the HIV Vaccine Trials Network. Private contributions are essential for enabling Fred Hutch scientists to explore novel research opportunities that lead to important medical breakthroughs. For more information visit www.fredhutch.org or follow Fred Hutch on Facebook, Twitter or YouTube.