4-Apr-2014 11:00 AM EDT, by Georgia Institute of Technology
favorite_border
Courtesy of Uzi Landman

Video shows the motion of nanoparticles in neighboring layers of the superlattice as pressure is applied. 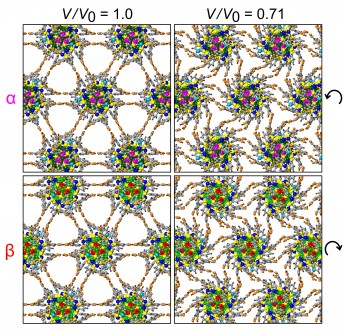 Figure shows the arrangement of nanoparticles in two neighboring layers of the superlattice, with configurations on the left corresponding to the equilibrium state of the superlattice at ambient conditions, and the ones on the right recorded at the end of the volume compression process. Comparison of the configurations reveals flexure of the ligands and gear-like rotations of the nanoparticles, with the hydrogen-bonds between ligands anchored to adjacent nanoparticles serving as “molecular hinges.”

Newswise — A combined computational and experimental study of self-assembled silver-based structures known as superlattices has revealed an unusual and unexpected behavior: arrays of gear-like molecular-scale machines that rotate in unison when pressure is applied to them.

Computational and experimental studies show that the superlattice structures, which are self-assembled from smaller clusters of silver nanoparticles and organic protecting molecules, form in layers with the hydrogen bonds between their components serving as “hinges” to facilitate the rotation. Movement of the “gears” is related to another unusual property of the material: increased pressure on the superlattice softens it, allowing subsequent compression to be done with significantly less force.

Materials containing the gear-like nanoparticles – each composed of nearly 500 atoms – might be useful for molecular-scale switching, sensing and even energy absorption. The complex superlattice structure is believed to be among the largest solids ever mapped in detail using a combined X-ray and computational techniques.

“As we squeeze on this material, it gets softer and softer and suddenly experiences a dramatic change,” said Uzi Landman, a Regents’ and F.E. Callaway professor in the School of Physics at the Georgia Institute of Technology. “When we look at the orientation of the microscopic structure of the crystal in the region of this transition, we see that something very unusual happens. The structures start to rotate with respect to one another, creating a molecular machine with some of the smallest moving elements ever observed.”

The gears rotate as much as 23 degrees, and return to their original position when the pressure is released. Gears in alternating layers move in opposite directions, said Landman, who is director of the Center for Computational Materials Science at Georgia Tech.

Supported by the Air Force Office of Scientific Research and the Office of Basic Energy Sciences in the Department of Energy, the research was reported April 6 in the journal Nature Materials. Researchers from Georgia Tech and the University of Toledo collaborated on the project.

The research studied superlattice structures composed of clusters with cores of 44 silver atoms each. The silver clusters are protected by 30 ligand molecules of an organic material – mercaptobenzoic acid (p-MBA) – that include an acid group. The organic molecules are attached to the silver by sulfur atoms.

“It’s not the individual atoms that form the superlattice,” explained Landman. “You actually make the larger structure from clusters that are already crystallized. You can make an ordered array from those.”

In solution, the clusters assemble themselves into the larger superlattice, guided by the hydrogen bonds, which can only form between the p-MBA molecules at certain angles.

“The self-assembly process is guided by the desire to form hydrogen bonds,” Landman explained. “These bonds are directional and cannot vary significantly, which restricts the orientation that the molecules can have.”

The superlattice was studied first using quantum-mechanical molecular dynamics simulations conducted in Landman’s lab. The system was also studied experimentally by a research group headed by Terry Bigioni, an associate professor in the Department of Chemistry and Biochemistry at the University of Toledo.

The unusual behavior occurred as the superlattice was being compressed using hydrostatic techniques. After the structure had been compressed by about six percent of its volume, the pressure required for additional compression suddenly dropped significantly. The researchers discovered that the drop occurred when the nanocrystal components rotated, layer-by-layer, in opposite directions.

Just as the hydrogen bonds direct how the superlattice structure is formed, so also do they guide how the structure moves under pressure.

When the nanoclusters move, the structure pivots about the hydrogen bonds, which act as “molecular hinges” to allow the rotation. The compression is possible at all, Landman noted, because the crystalline structure has about half of its space open.

The movement of the silver nanocrystallites could allow the superlattice material to serve as an energy-absorbing structure, converting force to mechanical motion. By changing the conductive properties of the silver superlattice, compressing the material could also allow it be used as molecular-scale sensors and switches.

The combined experimental and computation study makes the silver superlattice one of the most thoroughly studied materials in the world.

“We now have complete control over a unique material that by its composition has a diversity of molecules,” Landman said. “It has metal, it has organic materials and it has a stiff metallic core surrounded by a soft material.”

For the future, the researchers plan additional experiments to learn more about the unique properties of the superlattice system. The unique system shows how unusual properties can arise when nanometer-scale systems are combined with many other small-scale units.

This research was supported by the Air Force Office of Scientific Research (AFOSR), and by the Office of Basic Energy Sciences of the U.S. Department of Energy (DOE) under Contract FG05-86ER45234. Any conclusions or opinions expressed are those of the authors and do not necessarily represent the official views of the AFOSR or the DOE.