Self-Awareness in Humans Is More Complex, Diffuse Than Previously Thought 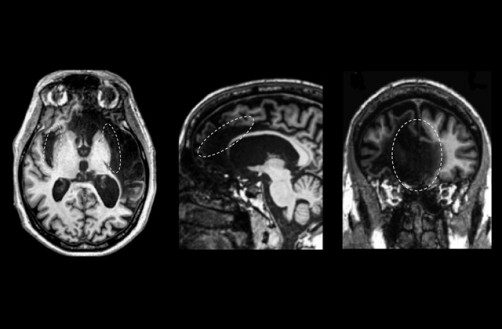 Department of Neurology, University of Iowa

Researchers at the University of Iowa studied the brain of a patient with rare, severe damage to three regions long considered integral to self-awareness in humans (from left to right: the insular cortex, anterior cingulate cortex, and the medial prefrontal cortex). Based on the scans, the UI team believes self-awareness is a product of a diffuse patchwork of pathways in the brain rather than confined to specific areas.

Newswise — Ancient Greek philosophers considered the ability to "know thyself" as the pinnacle of humanity. Now, thousands of years later, neuroscientists are trying to decipher precisely how the human brain constructs our sense of self.

Self-awareness is defined as being aware of oneself, including one's traits, feelings, and behaviors. Neuroscientists have believed that three brain regions are critical for self-awareness: the insular cortex, the anterior cingulate cortex, and the medial prefrontal cortex. However, a research team led by the University of Iowa has challenged this theory by showing that self-awareness is more a product of a diffuse patchwork of pathways in the brain – including other regions – rather than confined to specific areas.

The conclusions came from a rare opportunity to study a person with extensive brain damage to the three regions believed critical for self-awareness. The person, a 57-year-old, college-educated man known as "Patient R," passed all standard tests of self-awareness. He also displayed repeated self-recognition, both when looking in the mirror and when identifying himself in unaltered photographs taken during all periods of his life.

"What this research clearly shows is that self-awareness corresponds to a brain process that cannot be localized to a single region of the brain," said David Rudrauf, co-corresponding author of the paper, published online Aug. 22 in the journal PLOS ONE. "In all likelihood, self-awareness emerges from much more distributed interactions among networks of brain regions." The authors believe the brainstem, thalamus, and posteromedial cortices play roles in self-awareness, as has been theorized.

The researchers observed that Patient R's behaviors and communication often reflected depth and self-insight. First author Carissa Philippi, who earned her doctorate in neuroscience at the UI in 2011, conducted a detailed self-awareness interview with Patient R and said he had a deep capacity for introspection, one of humans' most evolved features of self-awareness.

"During the interview, I asked him how he would describe himself to somebody," said Philippi, now a postdoctoral research scholar at the University of Wisconsin-Madison. "He said, 'I am just a normal person with a bad memory.'"

Patient R also demonstrated self-agency, meaning the ability to perceive that an action is the consequence of one's own intention. When rating himself on personality measures collected over the course of a year, Patient R showed a stable ability to think about and perceive himself. However, his brain damage also affected his temporal lobes, causing severe amnesia that has disrupted his ability to update new memories into his "autobiographical self." Beyond this disruption, all other features of R's self-awareness remained fundamentally intact.

"Most people who meet R for the first time have no idea that anything is wrong with him," noted Rudrauf, a former assistant professor of neurology at the UI and now a research scientist at the INSERM Laboratory of Functional Imaging in France. "They see a normal-looking middle-aged man who walks, talks, listens, and acts no differently than the average person."

"According to previous research, this man should be a zombie," he added. "But as we have shown, he is certainly not one. Once you've had the chance to meet him, you immediately recognize that he is self-aware."

Patient R is a member of the UI's world-renowned Iowa Neurological Patient Registry, which was established in 1982 and has more than 500 active members with various forms of damage to one or more regions in the brain.

The researchers had begun questioning the insular cortex's role in self-awareness in a 2009 study that showed that Patient R was able to feel his own heartbeat, a process termed "interoceptive awareness."

The UI researchers estimate that Patient R has ten percent of tissue remaining in his insula and one percent of tissue remaining in his anterior cingulate cortex. Some had seized upon the presence of tissue to question whether those regions were in fact being used for self-awareness. But neuroimaging results presented in the current study reveal that Patient R's remaining tissue is highly abnormal and largely disconnected from the rest of the brain.

"Here, we have a patient who is missing all the areas in the brain that are typically thought to be needed for self-awareness yet he remains self-aware," added co-corresponding author Justin Feinstein, who earned his doctorate at the UI in February. "Clearly, neuroscience is only beginning to understand how the human brain can generate a phenomenon as complex as self-awareness."