Waksman’s work eventually led to the discovery of at least 20 antibiotics including streptomycin, the first effective treatment for TB 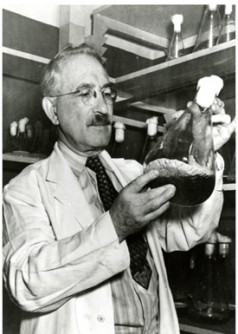 Selman Waksman received the Nobel Prize for Physiology or Medicine in 1952. 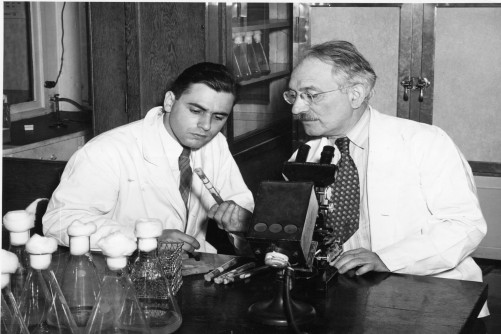 Graduate student Albert Schatz, left, and Selman Waksman in the laboratory in 1943.

Newswise — Throughout the first half of the 20th century, tuberculosis was one of the nation's most feared killers. At one point, the highly infectious disease known as TB killed more than 400 Americans a day. But by the early 1950s, TB deaths had dropped sharply – due in large part to research begun years before by a Rutgers University soil microbiologist named Selman Waksman. Waksman’s work in what was then the Rutgers College of Agriculture eventually led to the discovery of at least 20 antibiotics including streptomycin, the first effective treatment for TB. In 1952, Waksman received the Nobel Prize for Physiology or Medicine for his “ingenious, systematic and successful studies of the soil microbes” involved in that discovery. It was a startling investigative pathway to pursue. “If you say soil, dirt – in medical terms, it was anathema. Somebody who proposes you’ve got things in soil that would be of use in a medical manner was way out on a limb,” says Douglas E. Eveleigh, distinguished professor-emeritus in the Department of Biochemistry and Microbiology, School of Environmental and Biological Sciences. Eveleigh admires the professional risk Waksman took. “He was a famous soil microbiologist. For him to suddenly… go off in a new direction and hope this was going to work, you have to give him credit.” When Waksman entered Rutgers as an undergraduate in 1911, he was 23, a Russian immigrant who had been denied university admission in his homeland because he was Jewish. He lived with cousins on a farm near New Brunswick, where he worked and learned about plant and animal growth. That interest, and a scholarship, drew him to study agriculture at Rutgers, where his senior project focused on assessing soil microbes. He studied soil bacteriology as a graduate student under the dean of the College of Agriculture, Jacob G. Lipman (for whom Lipman Hall is named) and received his master of science degree in 1916. Waksman went to the University of California, Berkeley, for his Ph.D. in biochemistry. He returned to Rutgers as a research microbiologist at the New Jersey Agricultural Experiment Station and a lecturer in soil microbiology. By 1930, he was a full professor. In the late 1930s, British scientists were trying to refine penicillin, which had been found accidentally, and produce it in quantity. Waksman believed he could deliberately look for other antibiotics that might be made in soil by microbes. Using a process Waksman developed, his team of researchers began screening soil bacteria, and found one that produced actinomycin in 1940. “It was better than penicillin in attacking a wider spectrum of germs (including tuberculosis), but also was toxic to people,” Eveleigh says. More discoveries followed in Waksman’s lab using the screening system, including the discovery in 1943 by graduate student Albert Schatz, a member of Waksman’s team, of streptomycin's properties to combat tuberculosis. Seeing that streptomycin worked against TB, which penicillin did not, Waksman contacted medical researchers at the Mayo Clinic in Minnesota. Human trials proved the antibiotic safe for use and it later went into production. The drug needed to be given for several months, but it saved many patients and TB deaths fell. “Really, he was probably the foundation of turning Rutgers into a research university. He was the first to have research with impact,” says Joachim Messing, director of the Waksman Institute of Microbiology. The institute was created from royalties Waksman and the university received from his work. It “was his big dream and the culmination of his career,” says Nan Waksman Schanbacher, Waksman’s granddaughter. She was 3 years old when her grandfather won the Nobel Prize and now she is vice president and board chair of the Waksman Foundation for Microbiology, an organization that supports research and education in the field. “He was motivated very strongly to do something good for the world,” Schanbacher says. Opened in 1954 as the Institute of Microbiology, the institute was renamed for Waksman in 1974, one year after his death. Waksman's original laboratory in the basement of Martin Hall has been converted into a state-of-the-art conference room/mini-museum of the development of antibiotics. The American Chemical Society designated the space at Rutgers as a National Historic Chemical Landmark in recognition of the development of the actinomycete antibiotics. Waksman’s influence is still felt, although the mission of the institute has broadened. It now conducts research in microbial, developmental and plant molecular genetics as well as structural and computational biology. Its research today even sometimes links back to Waksman’s work. In the face of growing antibiotic resistance in some TB strains, Messing notes that one institute project has led to a new type of antibiotic that could potentially be useful against the disease. “Now we’ve ended up doing exactly what Waksman would have liked to have done, but from a different angle,” he says.

This story is part of "Rutgers Revolutionaries," an ongoing series celebrating Rutgers people and innovations that have changed lives around the world. 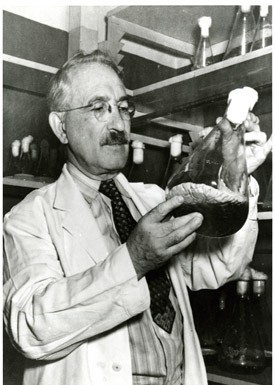 Caption: Selman Waksman received the Nobel Prize for Physiology or Medicine in 1952. 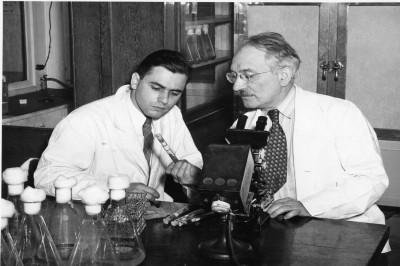 Caption: Graduate student Albert Schatz, left, and Selman Waksman in the laboratory in 1943.