To study the effects of improvised explosive devices on soldiers and help provide continuing treatment, researchers have developed IBESS, a sensor system that measures the physical environment of an explosion and collects data that can correlate what the soldier experienced with long-term outcomes. 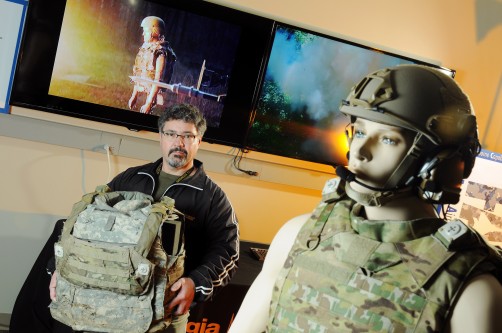 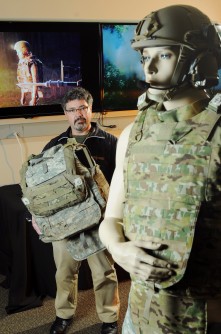 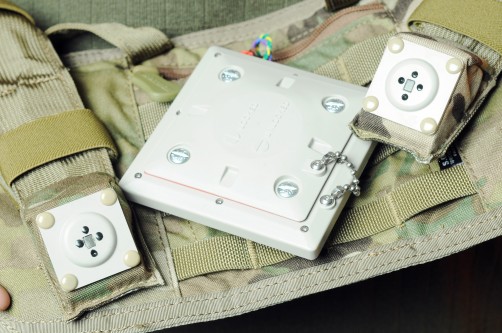 Components of the Integrated Blast Effect Sensor Suite (IBESS) are shown. The system measures the physical environment of an explosion and collects data that can be used to correlate what the soldier experienced with long-term medical outcomes.

Newswise — Improvised explosive devices (IEDs) are becoming a global problem for the U.S. armed forces. To prevent injuries to soldiers and provide better care to those who are injured, the U.S. military is striving to better understand how blasts impact the human body.

In 2011 the Army’s Rapid Equipping Force (REF) approached the Georgia Tech Research Institute (GTRI) to develop a system that measures the physical environment of an explosion and collects data that can be used to correlate what the soldier experienced with long-term medical outcomes, especially traumatic brain injury. The solution: the Integrated Blast Effect Sensor Suite (IBESS). IBESS is the first system to acquire integrated, time-tagged data during an explosive event – whether soldiers are on the ground or riding in a vehicle – and can later help recreate a holistic picture of what happened.

System of systemsThere are two parts to a blast: a shock wave that travels at supersonic speed, and compressed air, which travels in front of the shock wave. Both can cause considerable damage to the human body, but the exact effects are unclear.

“No one knows to what extent overpressure or acceleration causes injuries,” said Marty Broadwell, a principal research scientist at GTRI who manages the institute’s projects with REF. “Nor do we know how quickly an injury will show up, how long it will last or which soldiers are more resistant to harm than others. The only way to understand the impact of a blast is to collect data, which is precisely what IBESS does.”

How it works IBESS features two major subsystems: a unit worn by the soldier and a vehicle sensor suite. The soldier system is contained in a canvas pouch, which attaches to a soldier’s armor between his or her shoulder blades. A recorder in the pouch connects to four pressure sensors, two on the back and two on straps that hang over the front of the shoulders. Because these sensors face different quadrants, the unit captures directionality and more information than previous blast gauges.

“Soldiers already carry considerable gear, so reducing the weight of the body unit and power consumption of its batteries drove many design decisions,” said Brian Liu, a GTRI research engineer who served as technical lead on the project. For example, the recorder in the soldier body unit remains in sleep mode until pressure or shock waves hit a certain threshold, causing it to wake and begin recording data. This allows the system to have longer battery life and remain relatively transparent to the wearer.

The vehicle system serves a dual purpose: It records blast events that affect the vehicle, but also interacts and automatically links with the soldier system. When a soldier enters a vehicle, a base station installed in seats transmits RFID signals. If the soldier system has stored any data, these signals initiate a Bluetooth connection that enables two-way communication and data transfer. This semi-passive RFID technology is proximity based; transmission and reception occur only at very close range, so IBESS can identify a soldier’s precise location in the vehicle.

Sensors are also installed on the vehicle’s interior frame and seats. If an explosion or rollover occurs, these sensors collect linear acceleration and angular rotation data. The soldier system also wakes up and begins to record and transmit data. A single board computer aggregates data from both the vehicle and soldier systems and then passes it on to a rugged black box for final storage.

IBESS is specifically designed to withstand tremendous forces of an IED explosion.

“Materials, mounting strategies and mechanical isolation strategies have been used to ensure the devices successfully capture data in ‘survivable’ events,” Liu explained. “We first conducted research on what kinds of magnitudes of blasts were survivable for mounted and dismounted operations and then performed many tests at those levels for verification.”

IBESS is innovative on many fronts:

• Synchronized data: Unlike earlier generations of blast gauges, all data in IBESS is time-tagged, using GPS time as common time source. “Using this data we can rebuild an event,” Liu explained. “Even though soldiers aren’t wired together, we’ll know they were in the same vehicle and experienced the same event — and can assess how an event propagated through.”

• Anonymity: By leveraging the Department of Defense’s Common Access Card (CAC) system’s Personal Key Identifier (PKI), IBESS can collect information uniquely tied to individual soldiers. Use of the PKI makes the data virtually anonymous so other researchers can study it without compromising privacy or containing personally identifiable information.

Another hallmark of the project was its rapid completion schedule. REF awarded the contract to GTRI in July 2011. Researchers wrapped up preliminary designs in September, and by early 2012 they were testing and refining the system. IBESS units began to ship overseas in August, and now the system has been issued to more than 650 troops and will be installed on 42 vehicles in Afghanistan.

“Our work with GTRI has been outstanding,” said Joe Rozmeski, REF’s deputy chief of technology management. “Originally chosen for its sensor expertise, GTRI has proven to be an ideal partner for us. They understand their role perfectly and are in tune with the REF's objectives for integrated blast effect research and collection.”

Understanding the challengeAt its peak, the project involved more than 50 researchers with expertise ranging from electronics to mechanical engineering to health systems. This diversity in disciplines was critical to IBESS’ success.

“If you don’t understand the context in which a device will be used, you won’t be collecting the right information, said Shean Phelps, M.D., a principal research scientist who joined GTRI in 2011. A retired Army officer, Phelps was a Special Forces (Green Beret) weapons, medic and team sergeant before becoming a physician and was instrumental not only in initiating the IBESS project but also in providing both operational and medical perspectives.

Traumatic brain injury has become a greater concern in recent years. “Because of improved equipment and medical services, people are surviving severe explosions,” Phelps explained. “Yet we lack a clear understanding of blast-induced injuries on the human nervous system. Mild traumatic brain injury is a particular concern because it has a wide range of symptoms and doesn’t show up reliably in tests, so we can’t effectively diagnose, treat and manage its long-term effects.”

With IBESS, complex contextual data can be collected to link soldiers’ experiences with their medical records and later correlate a blast event to traumatic brain injury. IBESS is a major step forward for both the medical and engineering communities, Phelps said: “We now have a platform that’s dramatically different from previous efforts to collect blast data because it’s time-tagged, fully integrated between humans and vehicles, able to pinpoint an individual’s location in a vehicle — and able to accept data from any sensor.”

What’s aheadOngoing work is being conducted by a team of GTRI research engineers led by Allesio Medda, who are building a structured database and analytical tools for the data that IBESS collects. Other GTRI researchers are installing sensors in the ear-cup of communications headsets worn by soldiers, which measure linear and rotational acceleration on six axes. After testing, these headsets will be issued to 200 Army Rangers.

Currently IBESS only captures environmental data. Yet because of its open architecture, other diagnostic capabilities can be easily integrated. For example, sensors could be added to monitor heart rate, blood pressure, oxygen and hydration levels, body temperature and EKG activity.

With such biometric sensors, IBESS could evaluate soldiers’ physical condition in training or on the battlefield for triage purposes or to assess their ability to do a certain job. Data from the system could be used to improve equipment and vehicle design. For example, gear might be developed to divert a shock wave or change its frequency if a particular frequency is shown to damage the brain. IBESS could also be adapted for non-military applications, such as monitoring construction workers, race car drivers or elderly people in their homes.

“Collecting physical data on the blast environment is the critical first step before the system can be made medically predictive,” stressed Woods. “An explosion is a physical phenomenon. In order to understand the extent of injuries and how to prevent them, you must first understand the physics.” 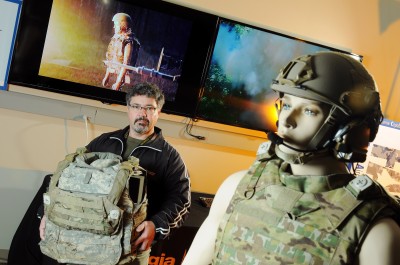 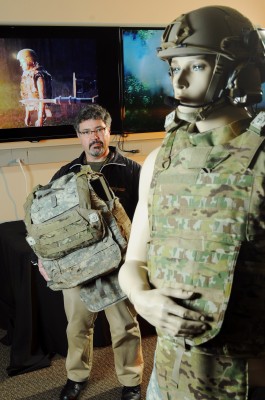 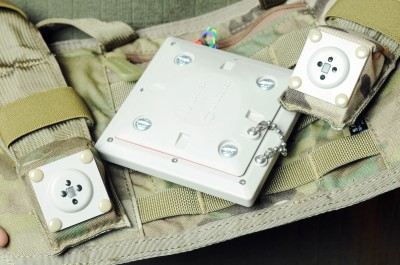 Caption: Components of the Integrated Blast Effect Sensor Suite (IBESS) are shown. The system measures the physical environment of an explosion and collects data that can be used to correlate what the soldier experienced with long-term medical outcomes.