Do you know the warning signs of sepsis? Most Americans don’t … and they should.

1-Nov-2017 3:05 PM EDT, by University of Alabama at Birmingham
favorite_border 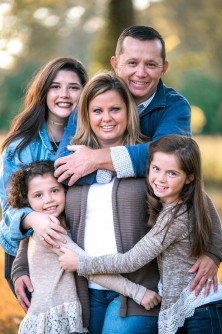 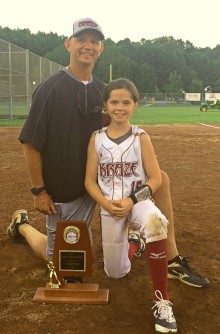 Darby was able to return to coaching his daughter's softball travel team in mid-summer. 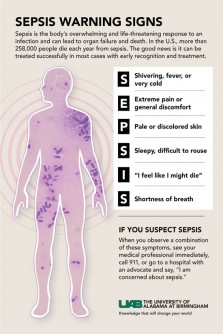 Learn the warning signs of sepsis.

Newswise — BIRMINGHAM, Ala. – Seeing the big green and gold ambulance in downtown Florence, Alabama, brought back memories for Kristina Darby. It is not just an ambulance — it is a mobile intensive care unit, part of the Critical Care Transport program of UAB Medicine — used to transport the sickest of the sick from one medical facility to another. Some three months before Kristina passed it on the street that afternoon in May, it had played a major role in saving the life of her husband, Kevin, from a little-known and oft-ignored killer: sepsis.

Sepsis does not get much attention; but it is a medical emergency, a life-threatening condition caused by an overwhelming response by the body to infection — so overwhelming that it begins to cause injury to the body’s own tissues and organs.

Forty percent of patients diagnosed with severe sepsis die, and half of the survivors suffer from a debilitating condition known as post-sepsis syndrome. Sepsis has also been named the most expensive in-patient cost in American hospitals, according to a study published by the Agency of Healthcare Research Policy. Costs to hospitals in 2014 reached nearly $24 billion.

For Kristina Darby, the sight of that big ambulance driving down a street in her hometown reminded her of how close she came to losing her husband and the father of their three children to a condition of which most Americans are barely aware.

Kevin Darby did not get sick much. He was a firefighter, owned a lawn maintenance company and traveled extensively as a coach for his daughters’ softball travel team. He was the picture of a healthy man in the prime of life, until he got sepsis.

On Saturday, Feb. 4, 2017, Darby and two other men on his firetruck came down with the flu.

With a typical firefighter’s work ethic, Darby finished his shift even as his flu symptoms worsened. On Monday, he went to a local health care facility, was given Tamiflu and was sent home. By Wednesday, his wife called 9-1-1, and paramedics took him to a nearby hospital.

“I had a fever of 103 degrees, 104 degrees,” Darby recalled. “My vitals were way down. They tested for sepsis, but I was already in septic shock.”

According to the Sepsis Alliance, septic shock follows severe sepsis and results in organ failure.  Blood pressure drops to dangerously low levels. This is a life-threatening condition, a medical emergency.

Physicians at the hospital told Kristina that Kevin needed advanced treatment, and they wanted to send him to UAB. The CCT mobile intensive care unit made the 236-mile round trip overnight on Feb. 9. Darby’s blood pressure had dropped to 70 over 40. He was going into multi-organ failure and had acute respiratory distress syndrome, or ARDS. He was a very sick man.

“We couldn’t believe how quickly this had happened,” Kristina Darby said. “It was just a case of the flu, and now here he was being loaded into that ambulance. But the crew was so professional and competent that I couldn’t help but think that everything was going to be all right now that CCT was there.”

But Darby was not out of the woods. He spent 29 days at UAB, most of it in intensive care.

“He had a bacterial infection in his bloodstream, and his organs were shutting down,” said Pilar Acosta-Lara, M.D., assistant professor in the Division of Pulmonary, Allergy and Critical Care Medicine in the UAB School of Medicine, who was on Darby’s treatment team at UAB. “We put him on dialysis, and he had what we call ICU delirium.”

There is no easy fix for sepsis. In Darby’s case, the team had to treat the underlying flu, but also move quickly to resolve the sepsis symptoms. He was on a ventilator, and received multiple antibiotics and IV fluids. He was placed on a roto-prone bed, which flips the patient over to take pressure off the back of the lungs so they can oxygenate better.

“Treatment for sepsis must be quick,” said Philip O’Reilly, M.D., another UAB pulmonologist who treated Darby. “A delay in administering antibiotics means the risk of mortality goes through the roof. Ideally, we would want to be treating a sepsis patient with antibiotics within 12 hours.”

And there’s the rub. Sepsis is not well-known in the general population, and most people do not know the signs and symptoms. Overworked emergency rooms and outpatient clinics often send patients home before the symptoms are obvious. O’Reilly and Acosta-Lara say that education and awareness are the keys to reducing the death rate associated with sepsis.

“Anyone with an infection could be a candidate for sepsis,” O’Reilly said. “A case of the flu that isn’t getting better, an infection that isn’t responding to antibiotics and is getting worse instead of better, increased heart and respiratory rates: These are warning signs that should not be ignored.”

A drop in blood pressure is a warning for sepsis. So are drowsiness, fatigue and confusion. People who have recently been hospitalized are at greater risk, as are those with overall increased risk for infection such as the very young or very old and those with chronic diseases or a compromised immune system.

And it is not just a bad case of the flu that can lead to sepsis. According to the Sepsis Alliance, any infection, from a bug bite or hangnail to a severe disease such as pneumonia or meningitis, can trigger sepsis. The infection can be bacterial, viral, fungal or parasitic.

“The most important message we can deliver is that sepsis is an emergency and you cannot treat it yourself,” Acosta-Lara said. “You need the right antibiotics, and you need professional medical attention. And you need to get medical attention quickly. The longer you wait, the worse the outcome is likely to be.”

Hospitals are by and large paying attention. UAB has created a sepsis campaign to stimulate increased awareness in nursing units and outpatient clinics. A logarithm called Q-SOFA can be employed to gauge the severity of symptoms, and whether they worsen.

“All patients admitted to acute care areas at UAB get Q-SOFA scores taken throughout the day by the nursing staff,” Acosta-Lara said. “If conditions persist or worsen, a Code Sepsis can be called quickly, and the medical emergency team rushes to the bedside to begin sepsis therapy. We are always on the lookout for potential sepsis cases.”

It has been 10 months since Darby came down with sepsis (the other two guys on the firetruck just had mild cases of the flu), and he is recovering; but he admits that he is not yet back to full health. He was able to coach softball again by early summer, but he has not been cleared to resume firefighting duties. He dealt with post-sepsis issues such as nausea and lack of appetite until early fall, losing more than 40 pounds.

“Within the last month, I guess I’ve gotten to about 90 to 95 percent of normal,” he said. “I feel like I can finally now do everything I used to do. I appreciate the care I received at UAB, everyone was great … the hospital staff, physicians, the CCT team. I feel very fortunate.”

Darby is hoping for clearance to resume his work with the fire department in the beginning of 2018. In the meantime, he will continue to recover. And this fireman, business owner, coach, husband and father has added one more title to his resume: advocate for sepsis awareness.

“I was healthy, and the next thing I knew I was down and out and almost died,” he said. “Everyone needs to understand what sepsis is, and how dangerous it can be. Learn the warning signs. Recognize the symptoms. Talk to your physician. Sepsis cannot be taken lightly.”

For more information on sepsis awareness and prevention, visit the Sepsis Alliance webpage at www.sepsis.org. UAB Medicine comprises the School of Medicine and the $3 billion UAB Health System that includes all of the University of Alabama at Birmingham’s patient-care activities and 2,300 licensed beds in six hospitals, one of which is UAB Hospital — the third-largest public hospital in the United States, winner of the Women’s Choice award, and one of U.S. News & World Report’s Best Hospitals. UAB is the state of Alabama’s largest single employer and an internationally renowned research university and academic health center; its professional schools and specialty patient-care programs are consistently ranked among the nation’s top 50. UAB is the largest academic medical center in Alabama and one of the top four largest academic medical centers in the United States. UAB’s Center for Clinical and Translational Science is advancing innovative discoveries for better health as a two-time recipient of the prestigious Center for Translational Science Award. Find more information at www.uab.edu and www.uabmedicine.org. 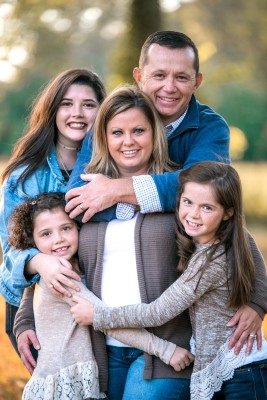 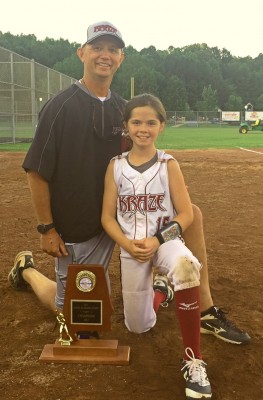 Caption: Darby was able to return to coaching his daughter's softball travel team in mid-summer. 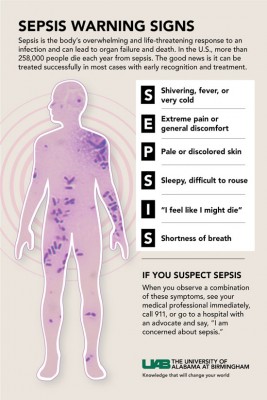