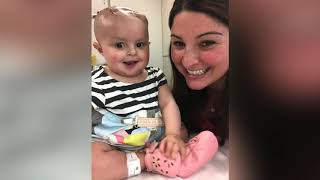 An innovative treatment plan and a doctor who refuses to give up are giving hope to a tiny fighter. Pictured is three-year-old Addie, diagnosed with a serious brain tumor, and her doctor, Derek Hanson, M.D., section chief of pediatric neuro-oncology at the Joseph M. Sanzari Children’s Hospital at Hackensack Meridian Health Hackensack University Medical Center.

Newswise — Vanessa and Brian are typical first-time parents. They adore their 3-year-old daughter, Adeline (Addie for short), and take much pride and pleasure in watching her learn to speak and assert her personality.

“Addie is very friendly,” Vanessa says. “She loves being around other kids, spending time at the park and playing princess dress-up.”

In most ways, Addie appears to be a normal toddler. However, Addie’s young life is far from typical. At 5-months-old Addie was diagnosed with Embryonal Tumor with Multilayered Rosettes (ETMR), a serious brain tumor primarily affecting children under 4-years-old. ETMR has less than a 10 percent survival rate.

The first few months of Addie’s life were uneventful, as she developed normally. Then in December 2016, Vanessa and Brian found themselves at the Pediatric Emergency Department at Joseph M. Sanzari Children’s Hospital at Hackensack Meridian Health Hackensack University Medical Center with baby Addie. She was unable to stay awake, vomiting and severely dehydrated. After performing several tests, including a CT scan, the physicians discovered a 5-centimeter mass in Addie’s brain.

Emergency surgery was performed, and Addie spent the next 12 days in the Pediatric Intensive Care Unit (PICU). “I had a feeling that something was wrong. When the news came it was devastating. I didn’t stop crying the entire time she was hospitalized. We really didn’t know what to do,” recalls Vanessa.

“He visited us every day that we were there. He stayed and spoke to us. He made us feel as comfortable as possible,” Vanessa says.

Once the tumor was identified as ETMR, Dr. Hanson knew he had to think outside the box.

“Looking back on previously reported cases of ETMR, it was clear that aggressive treatment alone would not lead to success,” he says. “Instead of hitting Addie’s tumor hard, I knew we needed to hit it smart and attack the underlying biologic mechanisms that were key to the tumor.”

“I then created a modified treatment plan for Addie using surgery, chemotherapy and stem cell transplant,” he says. “If this new treatment regimen were to work, Addie would still be at very high risk for relapse. Therefore, following the completion of her upfront treatment, she began an 18-month maintenance chemotherapy regimen with DFMO, a drug we are currently using in a clinical trial to combat neuroblastomas.”

Dr. Hanson’s new protocol proved to be successful. After undergoing four rounds of chemotherapy and a stem cell transplant, and receiving the experimental drugs, Addie received her first clean scan in September 2017. To date, her scans remain cancer free.

Vanessa and Brian are incredibly grateful to Dr. Hanson and his perseverance.

“We could tell that he was personally invested and really cared,” Vanessa says. “When Addie was first diagnosed, we wanted the best treatment. Ultimately we stayed at Hackensack because Dr. Hanson found the best treatment for her. He was very willing to collaborate with Brian and I and make us part of the care team. He gave us options and consulted with others.”

It’s obvious that Addie is a fan, too. Vanessa recalls coming to the hospital for Addie’s speech therapy, and Addie insisting on visiting Dr. Hanson. “He came and gave her a hug. It made her day!” Vanessa says.

Recently, Addie finished her drug trial and now her family is taking more steps toward having a typical routine.

“It feels scary—it’s not real yet,” Vanessa says. “After 26 months of chemo and all of the treatments, it is scary to think we are done. We are hopeful that this will be over.”

Addie does have some side effects from treatment. Most significantly is a hearing loss that is treated with hearing aids and speech therapy. She is delayed in some of her gross motor skills, but recently learned to run.

“After being given the news that your child is most likely going to die, every single day and every single milestone is that much more important and special. We can’t take anything for granted. It taught us to be happy with the small things and value family and friendships,” Vanessa says.

“Addie’s response to the chemotherapy treatment showed that a biology-based treatment approach can be successful in ETMR,” says Derek Hanson, M.D. “Now we are looking to make this biological approach available to more children with ETMR.”

Tackle Kids Cancer (a philanthropic initiative of Hackensack Meridian Health to raise money for pediatric cancer research and patient care programs) is funding the launch of an international registry and research platform for children with ETMR.

“The registry will collect clinical information from ETMR patients from across the globe and available tumor specimens,” Dr. Hanson says. “This information will serve as a resource for physicians and researchers to improve our understanding of ETMR and develop better approaches to treatment and overall care of children with ETMR.”

“When we received the prognosis, there was no treatment protocol for ETMR. There are so many rare tumors that need more research. It is not acceptable in this day and age that a child is given a less than 10 percent chance because there is not enough research,” she says. “Cancer is not as rare as we all like to think it is. It is so important because these kids deserve a chance. Our kids deserve better than that.”

Signs of Cancer in Children

Several symptoms could indicate cancer in kids, though many of them are also indicative of other health issues. These include paleness, easy bruising and unexplained, persistent fever. Learn more at www.HMHforU.org/CancerInKids.

The network’s notable distinctions include having four hospitals among the top in New Jersey by U.S. News and World Report. Other honors include consistently achieving Magnet® recognition for nursing excellence from the American Nurses Credentialing Center and being named to Becker’s Healthcare’s “150 Top Places to Work in Healthcare/2019” list.

The Hackensack Meridian School of Medicine at Seton Hall University opened in 2018, the first private medical school in New Jersey in more than 50 years, welcomed its second class of 96 students in 2019 to its On3 campus in Nutley and Clifton. Additionally, the network partnered with Memorial Sloan Kettering Cancer Center to find more cures for cancer faster while ensuring that patients have access to the highest quality, most individualized cancer care when and where they need it.

Hackensack Meridian Health is a member of AllSpire Health Partners, an interstate consortium of leading health systems, to focus on the sharing of best practices in clinical care and achieving efficiencies.