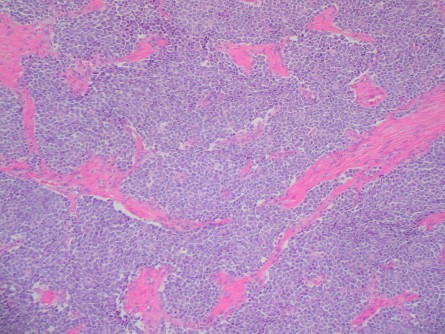 What secrets do these Ewing Sarcoma cells hold? CU Cancer Center study shows it may be upregulated PIK3R3 and lost PTEN.

“Since this cancer is rare, there hasn’t been much financial incentive for pharmaceutical companies to develop new drugs to treat it. Identification of alterations common to adult tumors, in our case upregulation of PIK3R3 and loss of PTEN, could potentially allow us to adapt therapeutic strategies for adult cancers to treat Ewing Sarcoma,” says Paul Jedlicka, MD, PhD, investigator at the CU Cancer Center and assistant professor in CU School of Medicine Department of Pathology.

The finding was accidental. Jedlicka’s lab was exploring targets of microRNAs in Ewing Sarcoma, when a rotating graduate student noticed that some of the tumor cell lines had lost expression of the gene PTEN and that most cell lines showed variable expression of the gene PIK3R3. Loss of PTEN was a particular surprise, especially once the group verified the loss they had seen in cell lines in a subset of real, patient tumors.

The gene PTEN is a known tumor suppressor, responsible for keeping in check a powerful pathway promoting cell growth and survival. Loss of the tumor-suppressor gene PTEN has been implicated in a range of adult cancers. However, in Ewing Sarcoma (an unusual cancer caused by the fusion of a gene on chromosome 11 with another gene on chromosome 22), few alterations in common adult oncogenes and tumor suppressors have thus far been identified.

“Another surprise was that when we tested the PTEN-positive and PTEN-negative cells against chemotherapies that are commonly used in Ewing Sarcoma, we found cells that had lost PTEN were more resistant to vincristine,” Jedlicka says. Although more studies are needed, this suggests that PTEN expression status could potentially be a useful biomarker for determining vincristine response in Ewing Sarcoma.

The second gene implicated in Jedlicka’s studies, PIK3R3, had an effect opposite that of PTEN – it behaved as a tumor promoter and thus could be a therapeutic target in cases of Ewing Sarcoma with elevated PIK3R3. Though no drugs currently exist to silence PIK3R3, it has also been implicated in some adult cancers, for example a subset of ovarian and colorectal cancers, and the brain cancer glioblastoma.

“Maybe if some pharma company develops a PIK3R3 drug for ovarian cancer or glioblastoma, it could be worth exploring its efficacy in Ewing’s as well,” Jedlicka says.

Jedlicka also notes this study as example of serendipity in science. “If you keep your eyes open, every once in a while you come across something interesting and unexpected, and sometimes more important than the thing you were looking for,” he says.