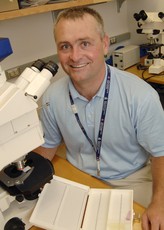 Dr. Joel Elmquist, professor of internal medicine, is helping shed light on how the brain chemical serotonin works to affect appetite. The study he led found that serotonin activates some neurons and melanocortin-4 receptors to curb appetite and at the same time blocks other neurons that normally act to increase appetite. 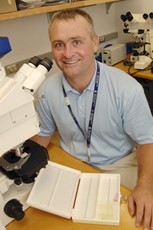 Dr. Joel Elmquist, professor of internal medicine, is helping shed light on how the brain chemical serotonin works to affect appetite. The study he led found that serotonin activates some neurons and melanocortin-4 receptors to curb appetite and at the same time blocks other neurons that normally act to increase appetite.

Newswise — A study led by a UT Southwestern Medical Center researcher sheds light on how the brain chemical serotonin, when spurred by diet drugs such as Fen-phen, works to curb appetite.

That knowledge could aid in the design of safer anti-obesity drugs nearly a decade after Fen-phen was banned for causing harmful side effects.

The study, which tested the effect of several drugs that alter serotonin levels in the brain, found that serotonin activates some neurons and melanocortin-4 receptors, or MC4Rs, to curb appetite and at the same time blocks other neurons that normally act to increase appetite.

The dual effect helps explain how such drugs, including Fen-phen, spur weight loss.

The finding, available online and in the July 20 issue of Neuron, also reinforces the role of serotonin " a regulator of emotions, mood and sleep " in affecting the brain's melanocortin system, a key molecular pathway that controls body weight.

"The more we understand about the pathways and the way serotonergic drugs regulate body weight, the more it one day might lead to harnessing beneficial properties of anti-obesity treatments like Fen-phen and minimizing the harmful side effects," said Dr. Joel Elmquist, professor of internal medicine at UT Southwestern and co-senior author of the study.

In the United States, about 66 percent of adults are obese or overweight, as are 16 percent of young people aged 6 to 19, according to the Centers for Disease Control and Prevention. The trend is significant because being overweight or obese increases the risk of harmful health consequences, such as heart disease, stroke, diabetes, non-alcoholic liver disease and death.

Drugs that enhance the brain's release of serotonin have helped people lose weight. Fen-phen, which paired fenfluramine with phentermine, had such success. The drug combination, however, also led some patients to develop cardiac complications, Dr. Elmquist said. The drug was removed from the market in 1997.

But the mechanisms of how it caused weight loss were never fully determined, he said.

So a few years ago, Dr. Elmquist and his research team set out to detail how fenfluramine affected the brain's molecular pathways to reduce appetite. In 2002, they examined the region of the brain's hypothalamus containing the arcuate nucleus, or ARC. In the ARC, drug-induced serotonin activates brain cells called pro-opiomelanocortin neurons, or POMC, which in turn release a hormone that acts on the MC4R to reduce appetite.

The team's new study shows how serotonin also simultaneously blocks other neurons, known as NPY/AgRP, from being able to inhibit activity of MC4Rs. By blocking this inhibitory activity, serotonin prevents an increase in appetite.

Researchers studied the effect of Fen-phen and other serotonin-inciting drugs on both normal and genetically engineered lean and obese mice. They found that serotonin's dual regulation of POMC and AgRP neurons is necessary to promote weight loss.

"The finding increases the understanding of the molecular circuitry that controls body weight in response to changing levels of serotonin," Dr. Elmquist said. "An overarching goal of this understanding, for humans, is to design specific, safe drugs to fight obesity."

Dr. Elmquist, who recently left Harvard Medical School, directs the newly formed Center for Hypothalamic Research at UT Southwestern. The center, along with the Taskforce for Obesity Research, a National Institutes of Health Interdisciplinary Research Center, is part of the institution's effort to investigate the causes of obesity, metabolic syndrome and diabetes.

The work was supported in part by the Boston Obesity Nutrition Center, American Diabetes Association, National Institutes of Health, Wellcome Trust and the ADA-EASD Transatlantic Fellowship.

This news release is available on our World Wide Web home page at http://www.utsouthwestern.edu/home/news/index.html