Scientists were surprised by the relative abundance of the four new miniature species and believe that these frogs were overlooked because of their insect-like calls and secretive habitats. The 12.2 mm long Robinmoore’s Night Frog (Nyctibatrachus robinmoorei) sitting on the Indian five-rupee coin (24 mm diameter) is one of the new species discovered from the Western Ghats mountain ranges in Peninsular India. 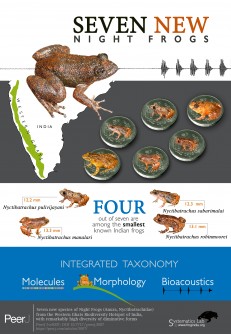 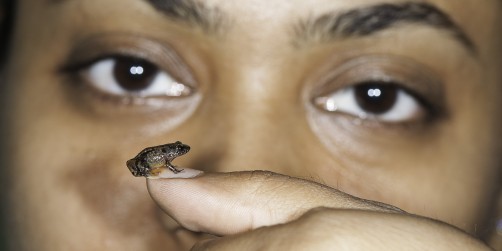 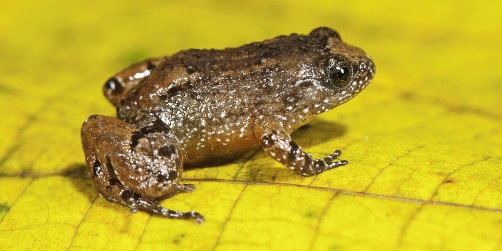 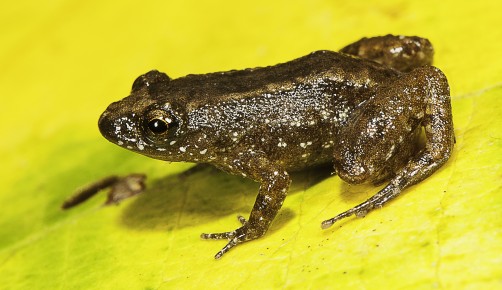 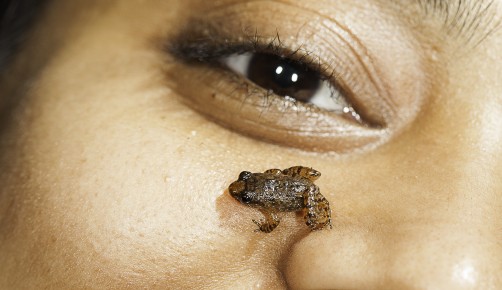 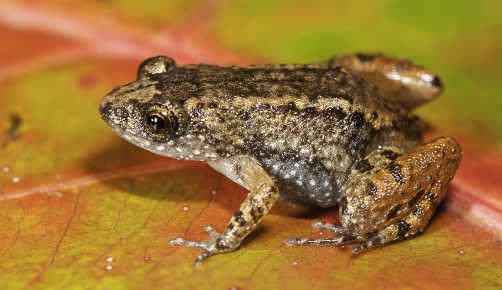 Sabarimala Night Frog (Nyctibatrachus sabarimalai), a 12.3 mm miniature-sized frog found in close vicinity of the Sabarimala Pilgrimage centre in the Western Ghats that attracts a large number of pilgrims. 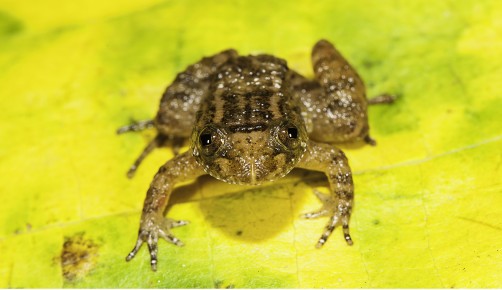 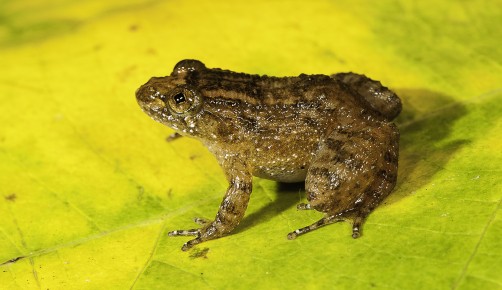 Newswise — Scientists were surprised by the relative abundance of the four new miniature species and believe that these frogs were overlooked because of their insect-like calls and secretive habitats.

Scientists from India have discovered seven new frog species belonging to the genus Nyctibatrachus, commonly known as Night Frogs. This find is a result of five years of extensive explorations in the Western Ghats global biodiversity hotspot in India. Four out of seven of the new species are miniature-sized frogs (12.2–15.4 mm), which can comfortably sit on a coin or a thumbnail. These are among the smallest known frogs in the world.

Unlike other frogs in the genus that are predominantly stream dwelling, the new miniature frogs were found under damp forest leaf litter or marsh vegetation. Scientists were surprised by the relative abundance of these previously unknown species at their collection localities. “In fact, the miniature species are locally abundant and fairly common but they have probably been overlooked because of their extremely small size, secretive habitats and insect-like calls”, says Sonali Garg who undertook this study as part of her PhD research at University of Delhi.

In the lab, the newly sampled frogs were confirmed as new species by using an integrated taxonomic approach that included DNA studies, detailed morphological comparisons and bioacoustics. Evidence from these multiple sources confirmed that the diversity of Night frogs is higher than previously known and particularly remarkably for the miniaturized forms. Previously, the Night Frog genus comprised of 28 recognized species of which only three were miniature-sized (<18 mm). Now the total number of known Nyctibatrachus species has increased to 35, of which 20 percent are diminutive in size. This frog genus is endemic to the Western Ghats of India and represents an ancient group of frogs that diversified on the Indian landmass approximately 70–80 million years ago.

The discovery of several new species of ancient origin can provide useful insights into the evolution of endemic frog lineages in the Western Ghats, which is a leading amphibian hotspot. The past decade has witnessed an exponential increase in the number of new amphibian species described from this region. Of the total new species of amphibians (1581) described globally between the years 2006–2015, the highest number were from the Brazilian Atlantic Forest (approximately 182) followed by the Western Ghats-Sri Lanka biodiversity hotspot (approximately 159), with 103 species described alone from the Western Ghats region.

However, the future of many of the new species may be bleak. All the newly described species are currently known only from single localities in the southern Western Ghats, and some lie outside Protected areas. Researchers found the Radcliffe’s Night frog and the Kadalar Night Frog inside private or state-owned plantation areas facing threats such as habitat disturbance, modification and fragmentation. The Athirappilly Night Frog was found in close vicinity to the Athirappilly waterfalls and the Sabarimala Night Frog near the Sabarimala pilgrimage centre, both of which are disturbed by anthropogenic activities. “Over 32 percent, that is one-third of the Western Ghats frogs are already threatened with extinction. Out of the seven new species, five are facing considerable anthropogenic threats and require immediate conservation prioritization”, says Prof SD Biju, who led the new study and has also formally described over 80 new species of amphibians from India.

This contains 10 images of the new species, a Graphical abstract, an audio file of the 'insect like' calls, and a copy of the article.

VIDEO: A video has been produced by the authors. It is viewable at https://youtu.be/7vWB4CW40p4 and will be made public when the embargo lifts.

PDF of this Press Release: http://static.peerj.com/pressReleases/2017/02/Press-Release-Garg.pdf

Link to the Press Preview of the Original Article (this link should only be used BEFORE the embargo ends): http://static.peerj.com/press/previews/2017/02/3007.pdf Note: this is an author proof and so may change slightly before publication.

Link to the Published Version of the article (quote this link in your story – the link will ONLY work after the embargo lifts): https://peerj.com/articles/3007 your readers will be able to freely access this article at this URL.

PeerJ has an Editorial Board of over 1,400 respected academics, including 5 Nobel Laureates. PeerJ was the recipient of the 2013 ALPSP Award for Publishing Innovation. PeerJ Media Resources (including logos) can be found at: https://peerj.com/about/press/ Caption: The 12.2 mm long Robinmoore’s Night Frog (Nyctibatrachus robinmoorei) sitting on the Indian five-rupee coin (24 mm diameter) is one of the new species discovered from the Western Ghats mountain ranges in Peninsular India. 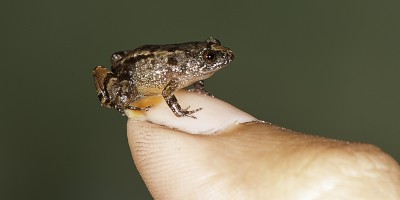 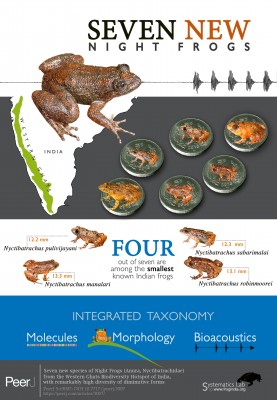 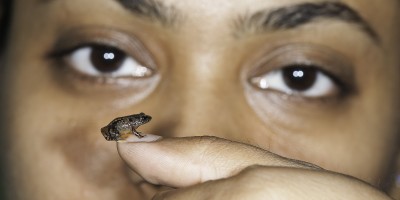 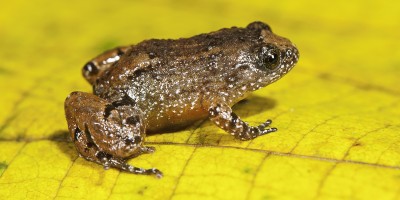 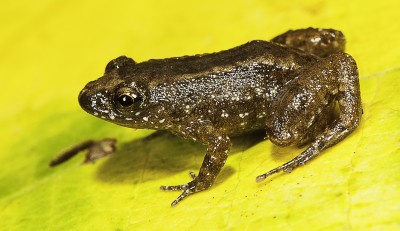 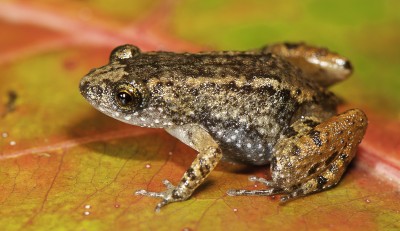 Caption: Sabarimala Night Frog (Nyctibatrachus sabarimalai), a 12.3 mm miniature-sized frog found in close vicinity of the Sabarimala Pilgrimage centre in the Western Ghats that attracts a large number of pilgrims. 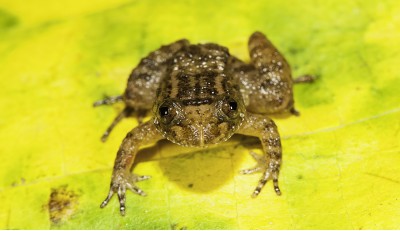 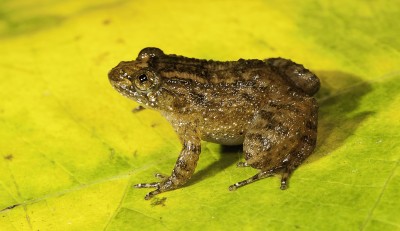