Newswise — DETROIT (October 3, 2017) – Approximately seven out of 10 Michigan consumers have an unfavorable view of a health insurance company tactic called “step therapy,” according to a new poll conducted by Lake Research Partners. Ninety-five percent of respondents believe that a doctor, not an insurance company, should have final say in how to best treat a patient.

To help those who have been denied access to medicines that their doctors prescribed, the nationally-focused, Michigan-headquartered American Autoimmune Related DiseasesAssociation (AARDA) today launched a statewide consumer education initiative, Let MI DoctorsDecide.

Step therapy is a tactic used by insurance companies that often forces patients to try several drugs before covering the cost of medicine originally prescribed by a patient’s doctor. Those suffering from an autoimmune disease are more likely to be faced with step therapy. Let MI Doctors Decide helps educate consumers about this insurance tactic and provides resources to help them navigate the difficult and frustrating process to receive the medicines they need.

“With chronic health problems, time is of the essence,” said Virginia Ladd, AARDA President, and Executive Director. “Forced step therapy delays access to necessary treatments and can cause diseases to progress. Patients need the right medication when a doctor prescribes it.”

“Let MI Doctors Decide is a necessary resource that can help patients at any stage of the step therapy process,” said Ladd.

Let MI Doctors Decide has resources such as a patient guide that includes tips for working with doctors and insurance companies, information about appealing insurance company decisions, and stories from some of those affected by step therapy.

“We need to put an end to this practice now,” continued Ladd. “Step therapy risks patient health, undermines the expertise of doctors and their relationships with patients, and contributes to financial waste in our health care system despite insurers touting it as a cost-saving measure. It should only be used when a doctor decides it’s best. In short, Michigan consumers say, ‘let my doctor decide.’”

“Based on our polling, there isn’t any ambiguity whatsoever on this issue,” said David Mermin, partner at Lake Research Partners. “Michigan consumers, across every demographic and region of the state, want treatment decisions left up to patients and doctors, not health insurance companies.”

Other results from the poll include:

• Seventy-eight percent of respondents strongly favor letting a doctor override step therapy if they expect the treatment to be ineffective. And 72 percent strongly favor requiring insurance companies to dispense medications as written by the patient’s doctor.

• Ninety-eight percent of respondents believe doctors should have the final say on treating a patient with an autoimmune disease when the doctor and insurance company disagree.

• Ninety-one percent of respondents believe doctors having a final say over an insurance company in how a patient is treated will have a positive effect on patients’ health, with two-thirds saying it will reduce the amount of waste in the system and more than half saying it will help reduce costs.

• Two-thirds of those surveyed would be more likely to vote for their member of Congress if he/she supported giving doctors the final say over treatment decisions.

About the poll, Lake Research Partners conducted a telephone survey of 500 healthcare consumers in Michigan on behalf of the American Autoimmune Related Diseases Association. The statewide survey was conducted from September 13-18, 2017 and has a margin of error of +/- 4.4%.

About Let MI Doctors DecideLet MI Doctors Decide is an initiative of the American Autoimmune Related DiseasesAssociation (AARDA) dedicated to helping patients who have been forced to go through step therapy by their insurance companies. Visit www.letmidoctorsdecide.org to learn more.

About AARDAFounded in 1991, AARDA is the only national nonprofit organization focused on addressing the problem of autoimmunity, the major cause of over 100 serious chronic diseases. Through collaborative efforts in the areas of education, public awareness, research, and patient services, AARDA is dedicated to the eradication of autoimmune diseases and works to alleviate both the suffering and socioeconomic impact of autoimmunity for patients across the country. 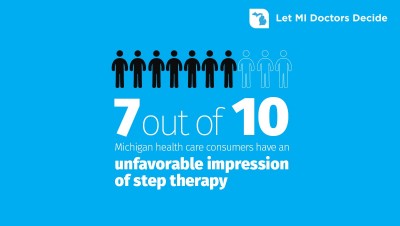