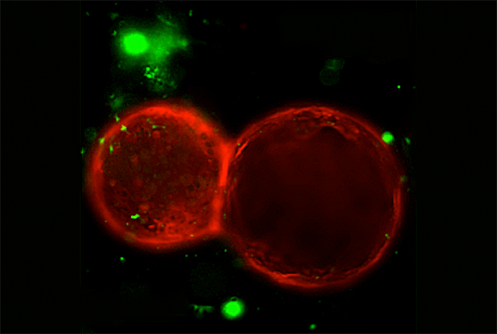 Cells from the anterior (left) and posterior (right) halves of the stomach of mice with cancer. Only the anterior stomach half was injected with Botox®. 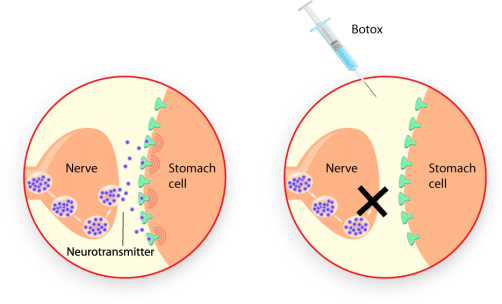 Botox® is taken in by the nerves, where it prevents the release of neurotransmitters.

Newswise — NEW YORK, NY (August 20, 2014) — Research from Columbia University Medical Center shows that nerves may play a critical role in stomach cancer growth and that blocking nerve signals using surgery or Botox® (onabotulinumtoxinA) could be an effective treatment for the disease. The study was conducted by the laboratory of Timothy C. Wang, MD, in collaboration with Duan Chen, MD, PhD, in Norway and is published in today’s issue of Science Translational Medicine.

“Scientists have long observed that human and mouse cancers contain a lot of nerves in and around the tumor cells,” said Dr. Wang, the Dorothy L. and Daniel H. Silberberg Professor of Medicine at Columbia’s Herbert Irving Comprehensive Cancer Center. “We wanted to understand more about the role of nerves in the initiation and growth of cancer, by focusing on stomach cancer.”

Stomach cancer is the fourth-leading type of cancer and the second-highest contributor to cancer mortality worldwide, with a 5-year survival rate of less than 25 percent.

Using three different mouse models of stomach cancer, Dr. Wang’s team found that when they performed a procedure called a vagotomy to cut the nerves, the surgery significantly slowed tumor growth and increased survival rates. Removing nerve connections from only one side of the stomach allowed cancer to continue growing on the other side (with the intact nerves), providing further evidence of the importance of nerves in tumor growth.

Dr. Wang’s team then tried to block transmission of nerve signals pharmacologically. They found that when they injected Botox® into mice, the drug proved to be as effective as surgery at reducing stomach cancer growth. “We found that blocking the nerve signals makes the cancer cells more vulnerable—it removes one of the key factors that regulate their growth,” said Dr. Wang.

Botox® prevents nerve cells from releasing a neurotransmitter called acetylcholine. In the case of cosmetic treatment, for example, blocking acetylcholine helps to lessen facial wrinkles by causing temporary paralysis of the muscles. Because acetylcholine also ordinarily stimulates cell division, using Botox® to prevent acetylcholine release might help slow the growth of cancer. Dr. Wang’s team also found evidence of the effectiveness of targeting nerves for cancer treatment in human patients when they compared 37 patients who had a recurrence of stomach cancer many years after surgery. Of the 13 patients who had had a vagotomy as part of their procedure, in all but one case, tumors did not develop in regions where the nerve connections had been severed. By contrast, tumors were found in the same region of the stomach in all 24 patients who had not had a vagotomy.

Next, Dr. Wang’s team plans to investigate the effectiveness of nerve-targeted therapy used in combination with other cancer treatments. Initial experiments have shown that blocking nerves makes cancer cells more vulnerable to chemical agents. Botox® used in combination with chemotherapy in mice increases survival rates up to 35 percent, compared with chemotherapy alone.

A limitation of the current studies is that they focus primarily on early stages of stomach cancer. “In the future, we’d really like to look at how we can use this method of targeting nerves to stop the growth of more advanced tumors,” Dr. Wang said. His laboratory hopes to develop drugs that block neurotransmitter receptors. This approach would be more effective than surgery or Botox® on more invasive forms on cancer, as such drugs would be able reach cells that have broken away from the main tumor.

The study was supported by grants from the Research Council of Norway (RCN), the Joint Programme of the Medical Faculty of Norwegian University of Science and Technology (NTNU) and St. Olav’s University Hospital, the Liaison Committee between the Central Norway Regional Health Authority and NTNU, and the National Institutes of Health ofUSA (1U54CA126513, R01CA093405, and R01CA120979)

The Herbert Irving Comprehensive Cancer Center (HICCC) of Columbia University and NewYork-Presbyterian Hospital is dedicated to the cure of cancer through innovative basic, clinical, and population-based research and outstanding patient care. HICCC researchers and physicians are dedicated to understanding the biology of cancer and to applying that knowledge to the design of cancer therapies and prevention strategies that reduce its incidence and progression and improve the quality of the lives of those affected by cancer. Initially funded by the National Cancer Institute (NCI) in 1972 and designated comprehensive in 1979, the HICCC is one of 41 NCI-designated comprehensive cancer centers in the United States, of which only three are in New York State. The designation recognizes the Center’s collaborative environment and expertise in harnessing translational research to bridge scientific discovery to clinical delivery, with the ultimate goal of successfully introducing novel diagnostic, therapeutic, and preventive approaches to cancer. For more information, visit www.hiccc.columbia.edu. 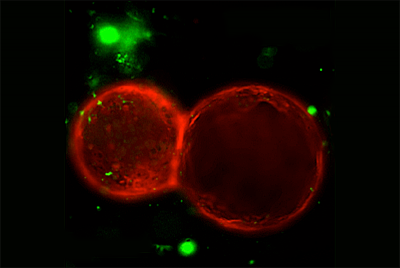 Caption: Cells from the anterior (left) and posterior (right) halves of the stomach of mice with cancer. Only the anterior stomach half was injected with Botox®. 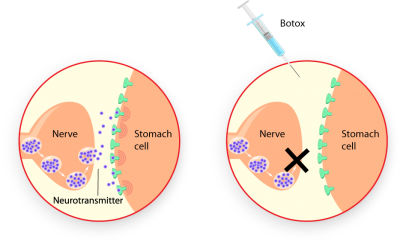 Caption: Botox® is taken in by the nerves, where it prevents the release of neurotransmitters.