Newswise — Researchers at the University of California, San Diego School of Medicine say that losing the ability to make a particular kind of sugar molecule boosted disease protection in early hominids, and may have directed the evolutionary emergence of our ancestors, the genus Homo.

The findings, published in this week’s early online edition of The Proceedings of the National Academy of Sciences, are among the first evidence of a novel link between cell surface sugars, Darwinian sexual selection, and immune function in the context of human origins

Sialic acids are sugar molecules found on the surfaces of all animal cells, where they serve as vital contact points for interaction with other cells and with the surrounding environment, including as targets for invasive pathogens. For millions of years, the common ancestors of humans and other apes shared a particular kind of sialic acid known as N-glycolylneuraminic acid or Neu5Gc. Then, for reasons possibly linked to a malarial parasite (http://health.ucsd.edu/news/2005/Pages/09_08_Varki.aspx) that bound Neu5Gc, a gene mutation three million or so years ago inactivated the human enzyme involved in making the molecule. Instead, humans began producing more of a slightly different form of sialic acid called Neu5Ac, the precursor of Neu5Gc.

“This occurred at about the same time as early humans were apparently becoming major predators in their environment,” said Pascal Gagneux, PhD, an evolutionary biologist and associate professor of cellular and molecular medicine at UC San Diego. “It’s hard to be sure exactly what happened because evolution works on so many things simultaneously, but the change in sialic acid meant that early humans developed an immune response to Neu5Gc. It became viewed by their immune systems as foreign, something to be destroyed. At about the same time, they started eating red meat, a major source of Neu5Gc, which may have further stimulated the immune response.”

Gagneux and colleagues say this strong immune reaction to Neu5Gc likely had a profound effect upon early human reproduction. In all mammals, the biological costs of pregnancy for the female can be huge, sometimes even life-threatening, and so it behooves females to ensure only the best-matching sperm successfully fertilize an egg. The scientists hypothesized that anti-Neu5Gc antibodies would target Neu5Gc-positive sperm or fetal tissues in early humans, kill them and thus reduce the chances of reproductive success.

The researchers tested the idea by exposing chimpanzee sperm, whose cell surface sugars are more than half non-human sialic acids, to human anti-Neu5Gc antibodies. The antibodies bound and killed the ape sperm in vitro. The scientists then mated female mice genetically altered to lack Neu5Gc and immunized to produce anti-Neu5Gc antibodies with Neu5Gc-positive males. The fertility rate for the females was measurably lower due to pre-zygotic incompatibility – the anti-sperm effects of female antibodies.

“Over time, this incompatibility would reduce and then eliminate individuals with Neu5Gc,” said Gagneux. “Oddly enough, based on our theoretical model, the process works faster when the fertility rate is only slightly decreased, rather than producing 100 percent infertility.”

Gagneux noted that the findings add further weight to the concept of “speciation by infection,” in which a combination of infectious diseases suffered by a particular population could predispose that population to diverge from other populations due to reproductive incompatibility. In the case of early humans, one driver may have been female immunity to Neu5Gc.

Previous studies (http://ucsdnews.ucsd.edu/newsrel/health/Varki%208%2022.htm) have shown that the loss of Neu5Gc occurred about two to three million years ago, which happens to be about the time of emergence of Homo ergaster/erectus, the likely ancestor of humans.

“We suggest that the immune mechanism described here was involved in the origin of the genus Homo,” said study co-author Ajit Varki, MD, professor of medicine and cellular and molecular medicine and director of the Center for Academic Research and Training in Anthropogeny at UC San Diego.

Co-authors of the paper are Darius Ghaderi, Fang Ma, Miriam Cohen, Patrick Secrest and Rachel E. Taylor, all of the Center for Academic Research and Training in Anthropogeny, Glycobiology Research and Training Center and departments of Medicine and Cellular and Molecular Medicine, UC San Diego; and Stevan Springer, Department of Biology, University of Washington, Seattle. 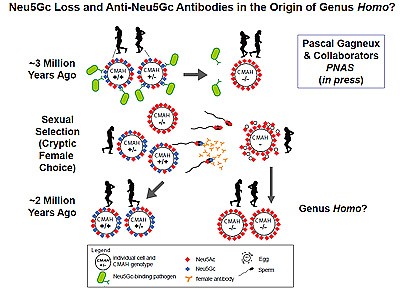 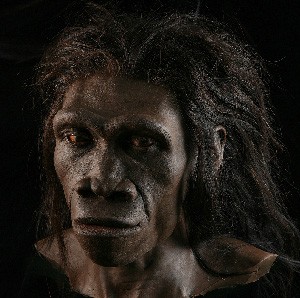 Caption: A reconstruction of a Homo erectus female (based on fossil ER 3733) by paleoartist John Gurche, part of the Smithsonian National Museum of Natural History’s Human Origins Program.

The Proceedings of the National Academy of Sciences