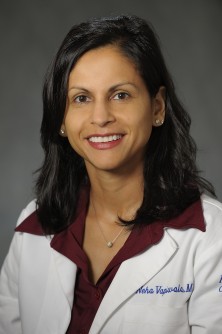 Neha Vapiwala, MD, an associate professor in the department in Radiation Oncology at Penn Medicine

PHILADELPHIA—Playing an active role in their radiation treatment decisions leaves cancer patients feeling more satisfied with their care, and may even relieve psychological distress around the experience, researchers from the Perelman School of Medicine at the University of Pennsylvania report in the journal CancerYour text to link....

In a study of 305 patients undergoing radiation treatment, Neha Vapiwala, MD, an associate professor in the department in Radiation Oncology at Penn Medicine, and colleagues at Penn’s Abramson Cancer Center found an association between patient satisfaction and patient-perceived control and shared decision making (SDM)—the process that allows patients and providers to make health care decisions together, taking into account scientific evidence as well as the patient’s values and preferences.

Patients who experienced SDM or perceived some control over their treatments were more satisfied with their care than those who did not experience SDM or perception of control—a difference of almost 17 percent and 26 percent, respectively. Furthermore, increased anxiety, depression and fatigue were reported in patients who desired control over treatments but did not perceive this control.

“Most importantly, our findings emphasize the value of patient-physician relationships and communication specifically in radiation oncology, and their impact on patient experience in a way that hasn’t been shown before,” said Dr. Vapiwala. “No matter where cancer patients are in the treatment process, there is always an opportunity to improve patient satisfaction—something hospitals and providers have consciously and increasingly been making a priority.”

Past studies of SDM in patients undergoing chemotherapy, as well as treatments for other medical conditions such as hypertension and diabetes, have shown an association with improved satisfaction and quality of life. Taking notice, the Institute of Medicine recently recognized its importance, and the Affordable Care Act even devotes an entire section to establishing a program for SDM. However, no group has evaluated its impact on patients going through radiation.

Often, radiation oncology is seen as a treatment avenue that is ultimately left to the physician to dictate. But there are tailored options, decisions, and discussions that can apply to individual patients, even if they all have similar diagnoses. There are different radiation regimens, dosages, risks and benefits, as well as pain control management issues, that should be part of the ongoing conversation.

Among the participants in the study, 31 percent of patients experienced SDM, 32 percent perceived control in decisions, and 76 percent reported feeling very satisfied with their radiation treatment course overall. There was a significant association noted between patient satisfaction with his/her radiation treatments and patient-perceived experience of SDM (84.4 percent vs. 71.4 percent) or perceived control over one’s treatment (89.7 percent vs. 69.2 percent).

One of the strengths of the study is its diverse group of patients. Ages ranged from 18 to 87 years old, with patients of varying ethnic and racial backgrounds, and having various cancers at all stages, as long as they were well enough to participate in the study.

The next step in the research is to determine both physician and patient barriers to SDM and to determine methods to break down these barriers. “As providers, it doesn’t matter what treatment you are offering, or how complicated it is, or how busy you may be,” said Dr. Vapiwala. “It’s worth taking even a few minutes to talk to patients about seemingly minor decisions in which they can provide some input. It’s not only critical in today’s health care setting where both information and misinformation are rampant, but will very likely lead to the patient feeling positively about the encounter.”

##Penn Medicine is one of the world's leading academic medical centers, dedicated to the related missions of medical education, biomedical research, and excellence in patient care. Penn Medicine consists of the Raymond and Ruth Perelman School of Medicine at the University of Pennsylvania (founded in 1765 as the nation's first medical school) and the University of Pennsylvania Health System, which together form a $4.3 billion enterprise.The Perelman School of Medicine has been ranked among the top five medical schools in the United States for the past 17 years, according to U.S. News & World Report's survey of research-oriented medical schools. The School is consistently among the nation's top recipients of funding from the National Institutes of Health, with $392 million awarded in the 2013 fiscal year.The University of Pennsylvania Health System's patient care facilities include: The Hospital of the University of Pennsylvania -- recognized as one of the nation's top "Honor Roll" hospitals by U.S. News & World Report; Penn Presbyterian Medical Center; Chester County Hospital; Penn Wissahickon Hospice; and Pennsylvania Hospital -- the nation's first hospital, founded in 1751. Additional affiliated inpatient care facilities and services throughout the Philadelphia region include Chestnut Hill Hospital and Good Shepherd Penn Partners, a partnership between Good Shepherd Rehabilitation Network and Penn Medicine.Penn Medicine is committed to improving lives and health through a variety of community-based programs and activities. In fiscal year 2013, Penn Medicine provided $814 million to benefit our community.