How large marine predators use the twilight zone to thrive, and survive

A variety of shark species use the ocean’s twilight zone to feed, control their temperature and conserve energy. A mackerel shark is being tagged on a fishing vessel, and a great white shark tries to make a meal of the REMUS SharkCam off the coast of Mexico. 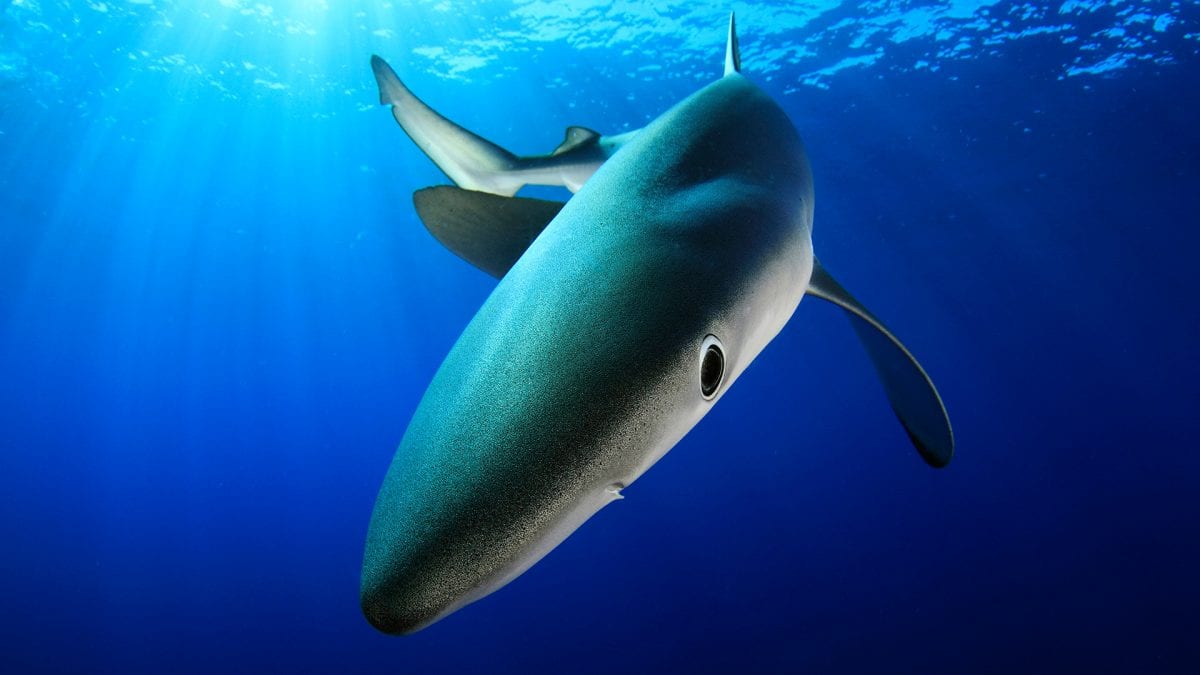 Tagging is way for researchers to gather information about shark movements, behavior and feeding patterns, including how much time they spend in the ocean’s twilight zone. 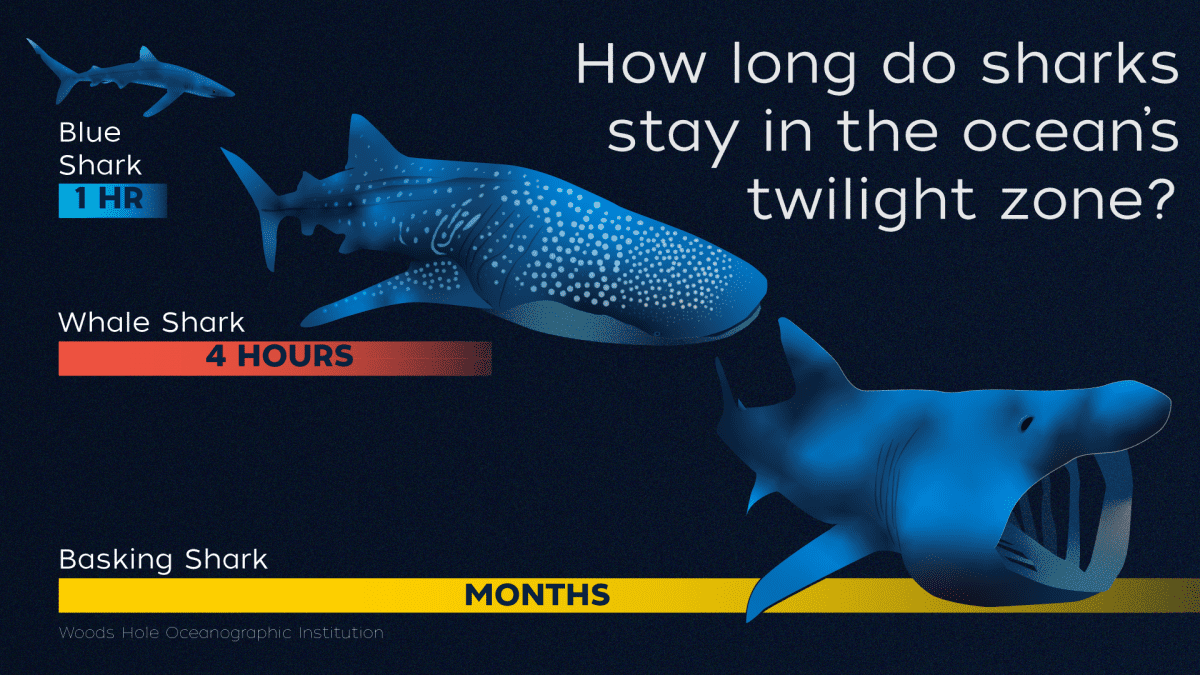 Whale sharks are one of the largest species of fish on the planet, reaching more than 40 feet in length, but feast on some of the planet’s smallest creatures, including zooplankton, in the ocean’s twilight zone

Different shark species spend varying lengths of time in the ocean’s twilight zone. Whale sharks are one of the largest species of fish on the planet, but feast on some of the planet’s smallest creatures, including zooplankton. Basking sharks spend months feasting on twilight zone creatures before reemerging to the sunlit surface waters.

Woods Hole, MA (July 9, 2021) -- Sharks are some of the largest fish in the ocean, known as apex predators, that steal the show in films, television and of course - shark week! For decades, Woods Hole Oceanographic Institution (WHOI) has studied the ways large marine predators (LMPs), like sharks, use the mesopelagic zone or middle layer of the ocean, better known as the ocean’s twilight zone (TZ). The ocean’s TZ is home to some of the largest fish biomass on Earth, making it a unique feeding ground for the ocean’s largest predators.  Many shark species venture from surface waters to the deep ocean between 200 and 1000 meters (656 to 3280 feet) and experts believe the main purpose is to hunt for prey when food is scarce in surface waters.

Different shark species spend varying lengths of time in the TZ. Blue sharks spend up to an hour hunting for a meal; whale sharks can spend a few hours; and basking sharks take it to the extreme, spending up to four months feasting on TZ creatures before reemerging to the sunlit surface waters.

-Though the “Biggest Fish in the Ocean” title goes to the whale shark, which is about as big as a school bus, the basking shark is a worthy contender. It averages 8 meters (26 feet), but some individuals have been recorded as large as 12 meters (40 feet).

-Basking sharks are known as “ram feeders”, swimming through dense patches of zooplankton with their mouths open, passively filtering food through its gill rakers.

There could be reasons other than food that marine animals visit the twilight zone.  Take the whale shark, for instance. Whale sharks aren’t really sharks at all, but the largest fish in the ocean, yet feed on the smallest of critters in surface waters, mainly zooplankton and fish eggs.  They venture to the mesopelagic to feed during migrations, and research suggests that whale sharks may also visit the middle ocean to cool down, remove parasites, save energy, or even to calibrate their internal navigation.

-Unlike other large filter-feeders (like the basking shark), the whale shark actively vacuums up water by rapidly opening and closing its mouth and expelling water through its gills.

-Some whale sharks migrate vast distances and seem to time their visits around annual phytoplankton blooms or fish spawning events off continental shelves.

How do sharks persevere in these deep depths if the conditions are much different than their surface water habitats? The ability for sharks and other LMPs to access the mesopelagic has evolved over time. Very little sunlight makes its way into the TZ, imposing the need for adaptations to enhance vision or alternative senses. Bioluminescence is the predominant source of light in the deep ocean, and sharks may detect it as point-source flashes or as shadows against the extended, dim background light it produces.

-Nearly all species of sharks have a specialized, reflective tissue in their eyes (tapetum lucidum) that increases photosensitivity, helping them to navigate the pitch-black waters.

Some sharks access the deep ocean by taking advantage of warm-core eddies - large, swirling ocean currents that draw warm water deep into the twilight zone where temperatures are normally colder. Using electronic tags, scientists have tracked blue and white sharks using eddies as a fast-track to the feast.

-White sharks, which have the ability to keep their body warmer than outside conditions, forage at mesopelagic depths in both warm and cold-water eddies while blue sharks, a cold-blooded species, prefer warm-core eddies only.

-Blue sharks can’t regulate their body temperature internally to stay warmer than the ambient water, which is why scientists think they prefer to use warm-water eddies.

Sharks have adapted to the conditions and environment of the twilight zone, using anatomical structures and physiological characteristics to access this region to forage. Thresher and mackerel sharks have increased amounts of myoglobin in their muscles that aid in the storage of oxygen, allowing them to remain active longer in the deep ocean.

Species with slender bodies and long pectoral fins, such as blue and oceanic whitetip sharks, can glide efficiently down into the deep ocean, presumably saving energy compared to species without these adaptations.

Simon Thorrold is a Senior Scientist in the Biology Department at the Woods Hole Oceanographic Institution (WHOI).  He and his team study the ocean’s top predators and how they use the ocean’s twilight zone.

“This shark research demonstrates that deep diving is far more frequent and extensive across species than previously recognized, and that this behavior is intricately tied to many key questions in ocean ecology,” said Thorrold.

Woods Hole Oceanographic Institution (WHOI) is a private, non-profit organization on Cape Cod, Massachusetts, dedicated to marine research, engineering, and higher education. Established in 1930, its mission is to understand the ocean and its interactions with the Earth as a whole, and to communicate an understanding of the ocean’s role in the changing global environment. WHOI’s pioneering discoveries stem from an ideal combination of science and engineering—one that has made it one of the most trusted and technically advanced leaders in fundamental and applied ocean research and exploration anywhere. WHOI is known for its multidisciplinary approach, superior ship operations, and unparalleled deep-sea robotics capabilities. We play a leading role in ocean observation and operate the most extensive suite of ocean data-gathering platforms in the world. Top scientists, engineers, and students collaborate on more than 800 concurrent projects worldwide—both above and below the waves—pushing the boundaries of knowledge to inform people and policies for a healthier planet. Learn more at whoi.edu.

Caption: Tagging is way for researchers to gather information about shark movements, behavior and feeding patterns, including how much time they spend in the ocean’s twilight zone.

Caption: Whale sharks are one of the largest species of fish on the planet, reaching more than 40 feet in length, but feast on some of the planet’s smallest creatures, including zooplankton, in the ocean’s twilight zone

Caption: Different shark species spend varying lengths of time in the ocean’s twilight zone. Whale sharks are one of the largest species of fish on the planet, but feast on some of the planet’s smallest creatures, including zooplankton. Basking sharks spend months feasting on twilight zone creatures before reemerging to the sunlit surface waters.