Shining a Red Light to Slow Downy Mildew on Basil

22-Jul-2015 7:05 AM EDT, by University of Florida Institute of Food and Agricultural Sciences
favorite_border 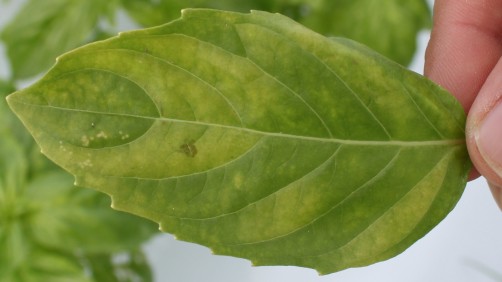 This image shows the symptoms of a basil plant with the downy mildew disease. UF/IFAS researchers are showing promising results to suppress the pathogen, by using red lights.

University of Florida Institute of Food and Agricultural Sciences researchers are trying to manage the disease with no or less spraying.

For their latest experiments, Shouan Zhang, a UF/IFAS plant pathology associate professor at the Tropical Research and Education Center in Homestead, FL, inoculated basil plants with the downy mildew pathogen. The scientist then put the plants under red lights in a greenhouse and found the process is slowing down the disease’s growth.

Jaimin Patel, a postdoctoral research associate for Zhang, said they put one set of plants on a bench in the dark for 12 hours, starting at 8 p.m. each day. Another set of plants was placed under red lights for the same time period. The downy mildew appeared on plants in the dark six days after inoculation, while no symptoms showed up on the plants that were under the red lights, Patel said. They repeated the experiment and found the disease symptoms five days after inoculation on the plants placed in the dark – and still, little to no symptoms of the downy mildew was found on the basil plants exposed to the red lights.

Scientists don’t know why the red light suppresses the disease, but they’re excited about its potential, and investigations into the mechanisms will be conducted.

“This study is important as growers could manage downy mildew, using this technology, with no or less chemicals,” said Patel, who works with Zhang at the UF/IFAS Tropical Research and Education Center in Homestead.

Downy mildew of basil was discovered in Homestead, Florida in 2007. Since then, it has spread to more than 40 other U.S. states according to a monitoring program during 2009-2014. It has also been reported in several countries from Africa, Europe, Middle East and South America, as recently as 2010. The disease makes the plant unacceptable for the market, according to a UF/IFAS Extension paper co-authored by Zhang.

Downy mildew initially shows up when the basil leaves turn yellow. It is often confused with yellowing of the leaves due to nutritional deficiencies. A few registered fungicides help control downy mildew on basil, but Zhang and his colleagues are trying to find other methods to control the d. Basil is grown on about 10,800 acres in the U.S. It is best known as a culinary herb, featured in Italian cuisine, and also plays a major role in some Southeast Asian cuisines. It is often used at the last minute in preparing a meal. Sweet basil is a pleasant-smelling annual plant with a spicy taste. Basil grows well in Florida and is attractive as a potted plant.

This study is supported by a U.S. Department of Agriculture/National Institute of Food and Agriculture Specialty Crop Research Initiative Project (2011-2015) led by Rutgers University. Collaborators on the project include Margaret McGrath, a plant pathology associate professor at Cornell University and Bob Hoffman, a basil grower in Virginia.