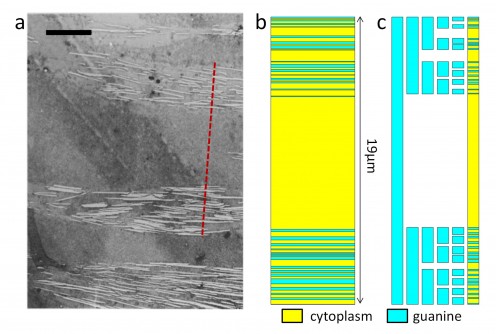 A transmission electron microscope image of ribbonfish skin shows random arrangements of crystalline quinine embedded in cytoplasm (a). The arrangement of crystal layers reflects light across a broad spectrum. The cytoplasm and crystal layers are reproduced in (b) -- red dotted line (5 mm scale bar) and then turned into a fractal pattern with random changes introduced in (c).

Newswise — A nature-inspired method to model the reflection of light from the skin of silvery fish and other organisms may be possible, according to Penn State researchers. Such a technique may be applicable to developing better broadband reflectors and custom multi-spectral filters for a wide variety of applications, including advanced optical coatings for glass, laser protection, infrared imaging systems, optical communication systems and photovoltaics, according to Douglas Werner, John L. and Genevieve H. McCain Chair Professor in Electrical Engineering at Penn State.

The proposed model also contributes to the understanding of the reflective layering in the skin of some organisms. The shiny skins of certain ribbonfish reflect light across a broad range of wavelengths, giving them a brilliant metallic appearance. The reflectivity is the result of stacked layers of crystalline organic compounds embedded in their skin’s cytoplasm. Some organisms with metallic sheens have layers that are stacked in a regular pattern, while others, including the ribbonfish, have stacking patterns described as “chaotic” or random. The Penn State team has determined that the stacking is not completely random and developed mathematical algorithms to replicate those patterns in semiconductor materials. “We are proposing a model that uses fractal geometry to describe the layering in the biological structure of silvery fish,” says Jeremy Bossard, postdoctoral researcher in electrical engineering, Penn State. “While we are not trying to reproduce the structure found in nature, the same model could guide the design of devices such as broadband mirrors.”

Fractals have been called the “geometry of nature” because they can help describe the irregular but self-similar patterns that occur in natural objects such as branching tree limbs. The researchers use a one-dimensional fractal, known as a Cantor bar fractal, which is basically a line divided by spaces or gaps. Normally, Cantor fractals appear to be very regular, but when random changes are introduced to the geometry, a more complex pattern emerges. The pattern resembles the layering of reflective layers in ribbonfish skin. “There is an underlying pattern, but there is randomness built in,” says Bossard, “similar to the way that living trees have an overall fractal pattern but do not grow symmetrically.”

The researchers then use another nature-inspired computational method called a genetic algorithm that mimics Darwinian evolution to create successive generations of fractal patterns from the parent patterns. Over approximately 100 generations, the patterns converge on the best design to meet all the target requirements.

Using these fractal random Cantor bars and the genetic algorithm, the researchers were able to mathematically generate patterns targeting optical functions in the mid-infrared and near-infrared ranges, including broadband reflection. They propose that the design approach could be used to develop nanoscale stacks with customized reflective spectra. The research results are reported in the January 13, 2016 edition of the Journal of the Royal Society Interface in a paper titled “Evolving random fractal Cantor superlattices for the infrared using a genetic algorithm.”

Lan Lin, a recent Ph.D. graduate in electrical engineering, also contributed to the work, along with Bossard and Werner, and performed materials fabrication and characterization for the project.