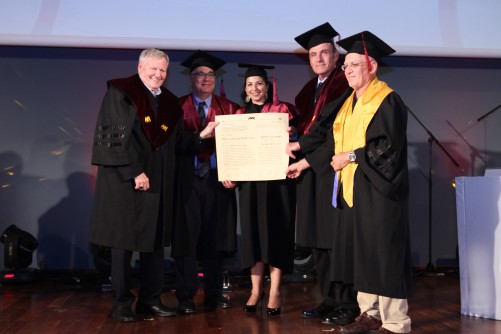 Newswise — Shira and Jay Ruderman were honored with a Degree of Doctor of Philosophy, Honoris Causa, from the University of Haifa at a festive event on Tuesday, held as part of the University’s 43rd Meeting of the Board of Governors. The honor was bestowed upon the Rudermans in recognition of their visionary leadership for making those who are different and outsiders become accepted and mainstream and on their uncompromising investment in strengthening relations between American Jews and Israel. Through their philanthropic activity the couple, who head The Ruderman Family Foundation, have changed the reality of how people with disabilities are included in all aspects of life. The two also advocate the strategic relationship between American Jews and Israel. In this context the Foundation contributed to the establishment of an MA degree at the University of Haifa - the Ruderman Program for American-Jewish Studies, the only program of its kind in Israel. President of the University of Haifa, Mr. Amos Shapira noted the couple's groundbreaking and important initiatives: "Jay and Shira constantly strive in their actions to bring about a change in reality and create a better society. For this we believe they are worthy of the highest honor that the University awards – the Degree of Doctor of Philosophy, Honoris Causa”.

“The Ruderman Family Foundation is proud of our partnership with the University of Haifa in creating the only academic program in Israel focused on the American Jewish community. This partnership is an active one and our appreciation of the work and dedication of President Amos Shapira and Professor Gur Alroey to promoting understanding of the American Jewish community in Israeli society grows each day. We are honored that the University of Haifa has chosen to recognize our joint pioneering work by bestowing an honorary doctorate on Jay and me”, said Shira Ruderman, who accepted the honor also on behalf of Jay, in her acceptance speech.