Signs of Sleep Seen in Jellyfish 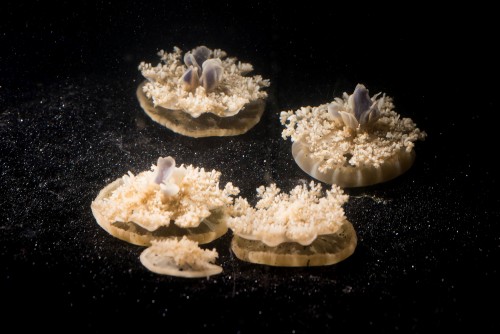 Of all the animals that scientists know can sleep, Cassiopea jellyfish (shown) are the only ones that don’t have a centralized nervous system, researchers find. 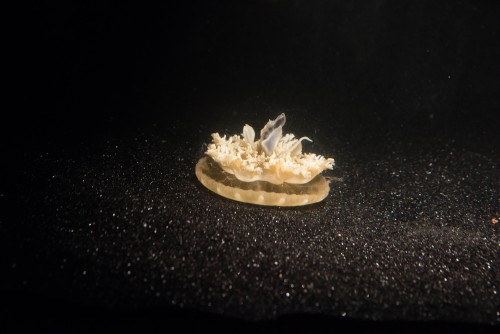 Newswise — Like humans, mice, fish and flies, the upside-down jellyfish Cassiopea exhibits the telltale signs of sleep, scientists report September 21, 2017 in the journal Current Biology. But unlike other animals that slumber, jellyfish don’t have a central nervous system.

“It’s the first example of sleep in animals without a brain,” says study coauthor Paul Sternberg, a Howard Hughes Medical Institute investigator at the California Institute of Technology. The findings push the origin of sleep further down the evolutionary tree of life ­­– to before the emergence of a centralized nervous system.

Scientists have long debated why animals sleep. Theories involve everything from memory, to learning, to cellular recovery. But Sternberg wants to answer something seemingly much more basic. The big question, he says, is “Do all animals sleep?”

It’s a controversial subject. All vertebrates that scientists have studied sleep, but whether the same is true for invertebrates remains a mystery. Researchers have demonstrated that fruit flies sleep, and Sternberg and others have argued that a roundworm called Caenorhabditis elegans does too. But not everyone’s convinced. And sleep in more primitive animals – like sponges and jellyfish – is even more nebulous. “We wanted to figure this out once and for all,” Sternberg says.

His graduate student, Ravi Nath, teamed up with friends at Caltech who studied Cassiopea, a mostly stationary jellyfish native to mudflats, mangrove swamps, and other warm, shallow waters. Caltech biologist Lea Goentoro kept tanks of the jellies living in artificial seawater in her lab. Cassiopea don’t look like typical jellyfish – they’re silver dollar-sized, splotched with pigment, and rest upside down on the sea floor. With tentacles curled above bell-shaped bodies, the jellies resemble miniature heads of cauliflower. But they pulse like other jellyfish, contracting and relaxing in a steady rhythm, and Nath and his colleagues wondered if the behavior was continuous.

“We went in at night and videotaped them with an iPhone,” he says. After recording the jellies for a minute at night and a minute during the day, the team manually counted individual pulses and got their first clue that Cassiopea might be sleeping: they pulsed less frequently at night. The researchers then created an image processing program to count the pulses of 23 jellies over six consecutive days and nights. Pulsing activity ebbed at night, as the researchers had observed earlier, but a little food dropped in the tanks could quickly wake the jellies up again.

“It’s like the odor of coffee permeating your consciousness in the morning,” Sternberg says. Such an easy wake up is a sign that Cassiopea’s sluggish night-time behavior is due to sleep, not paralysis or coma.

Researchers spotted a second sign of sleep after dropping the floor out from dozing jellies. The team placed Cassiopea inside a PVC pipe with a mesh bottom and then dipped the pipe into the tank – so submerged jellies rested on the mesh instead of the tank floor. Then the researchers lowered the pipe deeper into the tank, forcing the jellies to lift off the mesh and float in open water. They don’t like that, Sternberg explains. During the day, Cassiopea will quickly pulse their bells and swim down to rest on the mesh again. But at night, it takes them about three times longer to start pulsing. It’s like the jellyfish are a little groggy, he says. This delayed response to stimulation is typical for sleeping animals.

And like other animals that sleep, jellyfish that pull an all-nighter pay for it the next morning. Nath and colleagues squirted tiny jets of water at Cassiopea for six or 12 hours at night, and then counted the jellies’ pulses the next day. They’re less active after losing sleep, Nath says, but “after they catch up on their sleep, they return to normal.”

The results suggest that Cassiopea do indeed sleep, but for Sternberg, the work is also sparking more questions. “Do you need neurons to sleep?” he asks. “Do you need more than one cell to sleep?” He’d like to study sponges, or even protozoa, next and perhaps push the origin of sleep back even further.