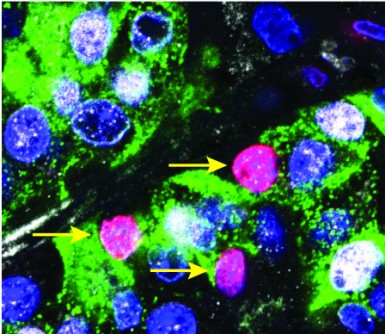 Newswise — PHILADELPHIA — Klaus Kaestner, PhD, professor of Genetics and postdoctoral fellow Dana Avrahami, PhD, from the Perelman School of Medicine, University of Pennsylvania, published a study this week in the Journal of Clinical Investigation, with colleague Benjamin Glaser, MD, from the Hadassah-Hebrew University Medical Center, Jerusalem, and colleagues. In this study, they were able to replicate human pancreatic beta cells – the cells in our body that produce the critical hormone insulin – in a mouse model in which donor cells were transplanted. The newly replicated cells retained features of mature beta cells and showed a physiological response to glucose.

The results of this proof-of-principle experiment have implications for helping both type 1 and type 2 diabetic patients. In type 1 diabetes, beta cells are destroyed by the patient’s own immune system and thus restoration of their numbers must be coupled with a method of preventing immune-mediated destruction. Similarly, a decrease in the number of functional insulin-producing beta cells contributes to the development of type 2 diabetes, so in principle, restoration of beta-cell mass can reverse or ameliorate both forms of diabetes.

The idea for this study came from newborns with a well-characterized, but rare, condition called hyperinsulinism of infancy, in which beta cells produce too much insulin – the exact opposite of diabetes. The blood sugar levels in these babies are too low. In about one-third of these newborns, most of their pancreatic beta cells are normal, but a small portion of cells lack a specific protein called p57, due to a mutation that occurs in a single or a few beta cells during fetal development. The p57 protein is a cell-cycle inhibitor, and therefore its elimination accelerates beta-cell replication, creating a large clone of beta-cells within the pancreas that secrete too much insulin.

“This ‘experiment’ of nature inspired our study,” says Kaestner. The team used short hairpin RNA, shRNA, to suppress the p57 gene in human beta cells obtained from deceased adult donors. The manipulated beta cells were then transplanted into diabetic mice.

After three weeks, the team found that the beta cells in the human-cell graft had a replication rate at least three-fold higher than those of controls without p57 suppression. The new beta cells also made beta-cell proteins seen in normal mature cells in humans: insulin, PDX1, and NKX6 1, and they had a normal glucose-induced calcium influx, as expected from functional beta cells.

These data show that even beta cells from older human donors, which are normally non-replicating, can be coaxed to divide while maintaining mature beta-cell properties, something that was previously thought by many researchers to be nearly impossible.

Ten to 15 years down the road, say the authors, physicians may be able to treat diabetic patients with a vehicle that homes in exclusively on beta cells and delivers a molecule that silences p57, thereby enhancing beta-cell mass and insulin production, and perhaps even curing the disease.