A new technique pioneered by University of Washington engineers enables "singing" posters and "smart" clothing to send audio or data directly to your car’s radio or your smartphone by piggybacking on ambient FM radio signals. 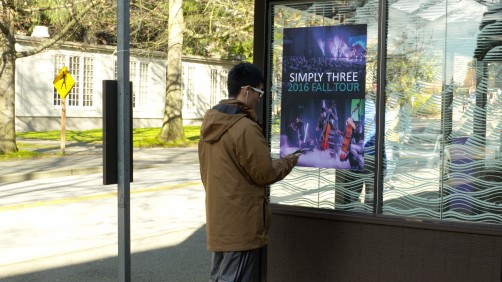 Researchers used FM radio signals to broadcast music and data notifications from a Simply Three band poster at a Seattle bus stop to a smartphone. An antenna made of copper tape was embedded on the back of the poster. 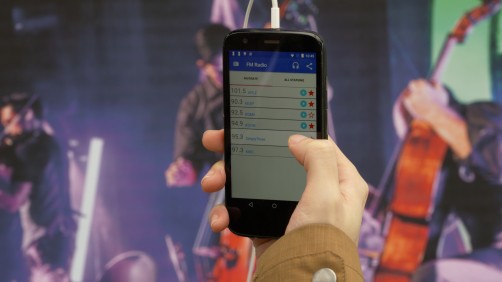 The FM backscattering system encodes audio or data on top of a regular FM broadcast but uses an unoccupied frequency in the FM radio band to send that information to a smartphone or car radio receiver. 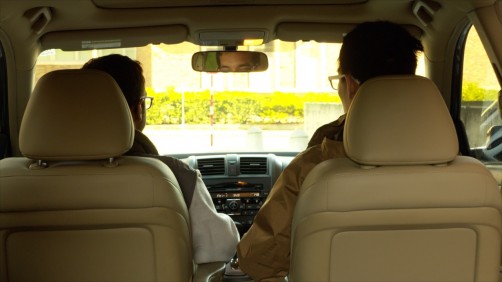 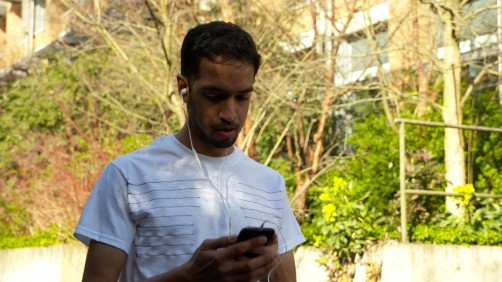 The UW team used conductive thread to sew an antenna into this cotton T-shirt and transmit data to a smartphone via ambient FM radio signals.

Singing posters and talking shirts: UW engineers turn everyday objects into FM radio stations Newswise — Imagine you’re waiting in your car and a poster for a concert from a local band catches your eye. What if you could just tune your car to a radio station and actually listen to that band’s music? Or perhaps you see the poster on the side of a bus stop. What if it could send your smartphone a link for discounted tickets or give you directions to the venue?

Going further, imagine you go for a run, and your shirt can sense your perspiration and send data on your vital signs directly to your phone.

A new technique pioneered by University of Washington engineers makes these “smart” posters and clothing a reality by allowing them to communicate directly with your car’s radio or your smartphone. For instance, bus stop billboards could send digital content about local attractions. A street sign could broadcast the name of an intersection or notice that it is safe to cross a street, improving accessibility for the disabled. In addition, clothing with integrated sensors could monitor vital signs and send them to a phone.

“What we want to do is enable smart cities and fabrics where everyday objects in outdoor environments — whether it’s posters or street signs or even the shirt you’re wearing — can ‘talk’ to you by sending information to your phone or car,” said lead faculty and UW assistant professor of computer science and engineering Shyam Gollakota. “The challenge is that radio technologies like WiFi, Bluetooth and conventional FM radios would last less than half a day with a coin cell battery when transmitting," said co-author and UW electrical engineering doctoral student Vikram Iyer. "So we developed a new way of communication where we send information by reflecting ambient FM radio signals that are already in the air, which consumes close to zero power.”

The UW team has — for the first time — demonstrated how to apply a technique called “backscattering” to outdoor FM radio signals. The new system transmits messages by reflecting and encoding audio and data in these signals that are ubiquitous in urban environments, without affecting the original radio transmissions. Results are published in a paper to be presented in Boston at the 14th USENIX Symposium on Networked Systems Design and Implementation in March.

The team demonstrated that a “singing poster” for the band Simply Three placed at a bus stop could transmit a snippet of the band’s music, as well as an advertisement for the band, to a smartphone at a distance of 12 feet or to a car over 60 feet away. They overlaid the audio and data on top of ambient news signals from a local NPR radio station.

“FM radio signals are everywhere. You can listen to music or news in your car and it’s a common way for us to get our information,” said co-author and UW computer science and engineering doctoral student Anran Wang. “So what we do is basically make each of these everyday objects into a mini FM radio station at almost zero power.”

Such ubiquitous low-power connectivity can also enable smart fabric applications such as clothing integrated with sensors to monitor a runner’s gait and vital signs that transmits the information directly to a user’s phone. In a second demonstration, the researchers from the UW Networks & Mobile Systems Lab used conductive thread to sew an antenna into a cotton T-shirt, which was able to use ambient radio signals to transmit data to a smartphone at rates up to 3.2 kilobits per second.

The system works by taking an everyday FM radio signal broadcast from an urban radio tower. The “smart” poster or T-shirt uses a low-power reflector to manipulate the signal in a way that encodes the desired audio or data on top of the FM broadcast to send a “message” to the smartphone receiver on an unoccupied frequency in the FM radio band.

“Our system doesn’t disturb existing FM radio frequencies,” said co-author Joshua Smith, UW associate professor of computer science and engineering and of electrical engineering. “We send our messages on an adjacent band that no one is using — so we can piggyback on your favorite news or music channel without disturbing the original transmission.”

The team demonstrated three different methods for sending audio signals and data using FM backscatter: one simply overlays the new information on top of the existing signals, another takes advantage of unused portions of a stereo FM broadcast, and the third uses cooperation between two smartphones to decode the message.

“Because of the unique structure of FM radio signals, multiplying the original signal with the backscattered signal actually produces an additive frequency change,” said co-author Vamsi Talla, a UW postdoctoral researcher in computer science and engineering. “These frequency changes can be decoded as audio on the normal FM receivers built into cars and smartphones.” In the team’s demonstrations, the total power consumption of the backscatter system was 11 microwatts, which could be easily supplied by a tiny coin-cell battery for a couple of years, or powered using tiny solar cells.

The research was funded in part by the National Science Foundation and Google Faculty Research Awards. 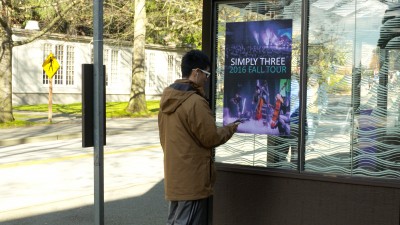 Caption: Researchers used FM radio signals to broadcast music and data notifications from a Simply Three band poster at a Seattle bus stop to a smartphone. An antenna made of copper tape was embedded on the back of the poster. 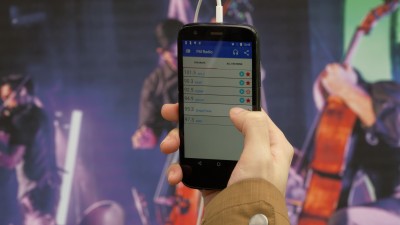 Caption: The FM backscattering system encodes audio or data on top of a regular FM broadcast but uses an unoccupied frequency in the FM radio band to send that information to a smartphone or car radio receiver. 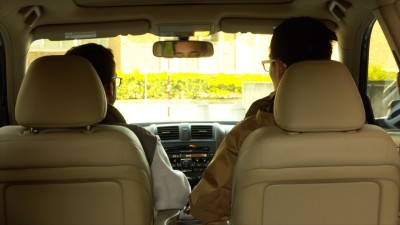 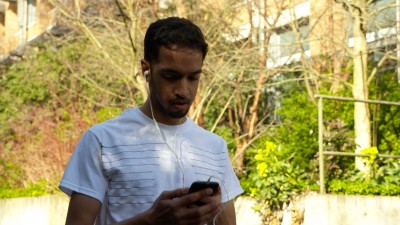 Caption: The UW team used conductive thread to sew an antenna into this cotton T-shirt and transmit data to a smartphone via ambient FM radio signals.