CU Boulder researchers are developing new methods for sequencing entire strands of DNA from humans or bacteria in just 100 seconds, which could lead to transformative advances in biology and medicine. Assistant Professor Prashant Nagpal explains why rapid, affordable DNA sequencing is so important and why it may finally be within reach. 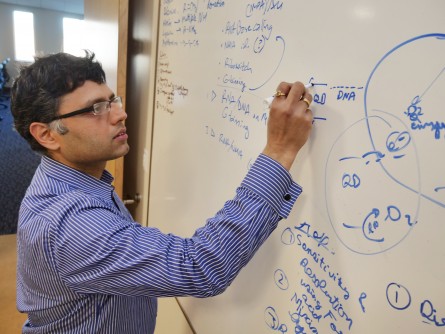 The new methods — one of which is based in nanoscale quantum electronics and one in optics — could one day allow a person to sequence his or her genome in under two minutes using simple equipment, said Prashant Nagpal, an assistant professor in CU Boulder’s Department of Chemical and Biological Engineering.

DNA sequencing, which determines the precise order of nucleotides contained in biological molecules, can be used to map individual genes or entire genetic regions. Since its inception in the 1950s, sequencing has been incorporated into medicine, evolutionary biology and other bioscientific fields, all while increasing in speed and processing power by entire orders of magnitude.

Nagpal describes his new research as a timely reimagining of a technology that has existed for decades, but has run up against fundamental limitations in recent years.

“The human genome consists of over 3 billion DNA base pairs,” said Nagpal. “Currently, sequencing relies on sampling 20 to 30 of these pairs at a time, which is good to have, but can only tell you so much.”

The current sampling method, Nagpal says, opens the possibility for replication errors in the larger data set that might overlook fine-grain markers in a person’s genetic profile. Single-molecule sampling, he says, offers a more accurate picture.

Nagpal and his team turned to quantum electronics for the solution. They send a small charge through a DNA or RNA molecule, and record measurements of all nucleotides in single-molecules. The sequence identified the nucleotides with 99.7 percent accuracy, up from 80 percent achieved by other nanotechnology methods.

The advances in quantum-based sequencing were described recently in the journals ACS Nano and Journal of the American Chemical Society. The W.M. Keck Foundation provided support for all the single-molecule sequencing research. Nagpal has also been developing an optics-based method for single-molecule sequencing that uses a diode laser and a camera comparable to that of an average smartphone to rapidly identify nucleotide sequences. Because of its unique physical properties as both a particle and a wave, light is a nimbler means of gathering information and transmitting it in compressed form.

In a forthcoming paper currently in press in the journal Small, Nagpal and his colleagues demonstrated a high-throughput sequencing method can be massively parallelized using a two-millimeter chip array that can take seconds instead of hours.

“With this block sequencing method, you don’t need to even sequence on the level of single letters like A, C, G and T,” said Nagpal. “You can extrapolate the same information faster, similar to how you watch a compressed version of a movie on YouTube or Netflix.”

The research is still in the early stages, and Nagpal says that the next step would be to apply the sequencing methods to more complex bacterial samples. In the future, he envisions a portable DIY sequencing kit that would cost around $1. A person could take a DNA swab, put it onto the microchip and wait 100 seconds to receive data that could reveal potentially risky genetic markers for cancer, for example, or provide crucial information for doctors attempting to match organs to transplant recipients.

“At scale, the potential applications are tremendous,” said Nagpal. “From identifying antibiotic resistance to accelerating drug discovery, improvements in the speed and accuracy of sequencing could be transformative to many scientific fields.”