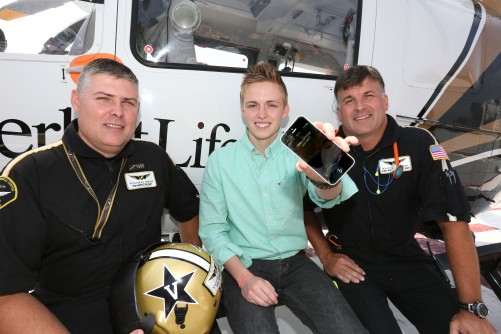 Now that he has recovered from being pinned underneath his truck, Sam Ray (center) visits with Tim Hurst and Kirk Krokosky, the Vanderbilt LifeFlight nurses who helped save his life.

Newswise — A Vanderbilt patient who survived the unthinkable has brought a whole new meaning to the term “butt dialing” and believes that prayer, along with a little help from Siri, saved his life. Sam Ray, 18, was never a fan of Siri, the hands-free virtual assistant on Apple iPhones, until he found himself pinned under his truck with Siri as his only way to call for help. On July 2, the recent high school graduate was working under his truck, which was lifted up on a jack in the driveway of his family’s Murfreesboro, Tennessee, home. Needing a little advice, he called his father, who encouraged him to stop what he was doing until they could look at the truck together. Sam put his phone in his back pocket and proceeded to slide out from under the truck when the jack gave way, causing the nearly 5,000-pound vehicle to fall on him. “I just kept praying out loud, ‘Lord, get me out of this,’” Sam said. “I kept reciting Philippians 4:13, ‘I can do all things through Christ who strengthens me.’” He yelled for help, but no one could hear him. Helpless and alone, he suddenly heard the familiar sound of Siri activating in his back pocket and realized that this iPhone feature could possibly allow him to call for help. His arms were trapped, making it impossible to access his phone, but he was able to push up on his hip to activate Siri in his pocket and request that his phone call 911. After several attempts, he heard a voice on the line and realized he had gotten through. “When I heard a woman talking from inside my pocket, I just started shouting,” Sam said. “I didn’t know if she could hear me or not, but I heard her say that help was just around the corner.” Responders with Rutherford County Emergency Medical Services, the Rutherford County Sheriff’s Department, the Rutherford County Fire Department and the Tennessee Highway Patrol responded to Sam’s call. They were able to move him out from under the vehicle and then transported him to the Vanderbilt LifeFlight base in Murfreesboro, where he was then flown to Vanderbilt. “We’re always concerned with crush injuries, and the longer a patient is trapped, the more problems they can have,” said Kirk Krokosky, one of Sam’s flight nurses. “He could have been there for hours, but as fate would have it, Siri was sort of his guardian angel.” During the estimated 40 minutes that Sam was under his truck, he sustained three broken ribs, a bruised kidney, a cut on the forehead, and second- and third-degree burns to one arm that was under the exhaust pipe. However, an accident like this could have easily had a very different outcome, said his doctor, Richard Miller, M.D., Chief of Trauma and Surgical Critical Care and professor of Surgery at Vanderbilt. “He’s very lucky. He ended up sustaining injuries that are easily recoverable, but it could have potentially been very serious,” Miller said. “A tool like Siri is a modern-day rescue item that we didn’t have in the past and potentially saved him from more serious or long-term complications from his crush injury.” Sam’s mother, Laura Ray, was coincidentally already at Vanderbilt that day with her father and was in the hospital lobby when she got the call that her son was onboard LifeFlight with injuries. “We are blessed beyond measure,” Laura said, “It could have been so much worse; I could be burying my son. We’re so thankful that God has allowed us to keep him and that we are allowed to watch him continue to grow.” Sam plans to attend Tri-State Baptist College in Mississippi this fall to explore a career in ministry, but he says he hasn’t ruled out the health care field. “I don’t know what the future holds, but I would love to help people the way I was helped,” Sam said. “It’s reassuring to know I’m here for a purpose. I could have died underneath that truck. This has reminded me how fragile life is and how little time we have to make a difference.” As for Sam’s opinion on Siri, he says it has definitely changed.