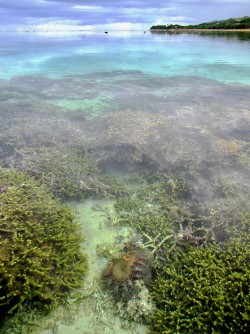 A tagged sea star is shown in the lower center part of this view of the Coral Coast of the Fiji Islands. Researchers tracked sea stars to see if they preferred marine protected areas or fished areas. 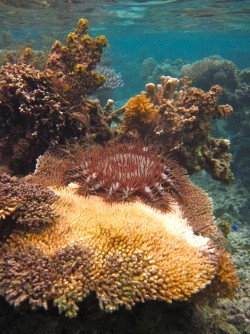 A crown-of-thorns sea star is shown on a coral reef in the Fiji Islands. Researchers found that the sea stars are a threat to small marine protected areas. 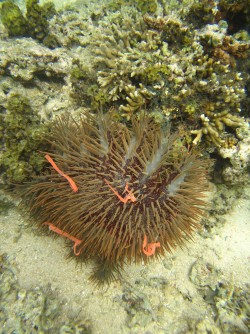 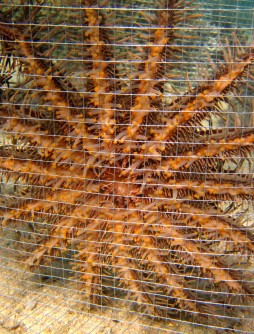 A crown-of-thorns sea star is shown in a cage used to hold the animals prior to release at the border of a marine protected area in the Fiji Islands. 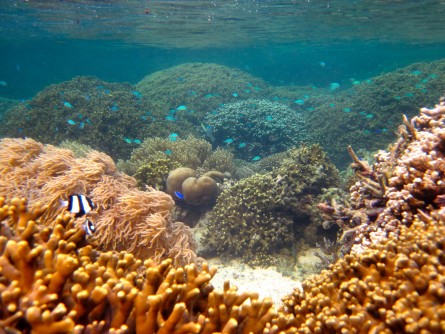 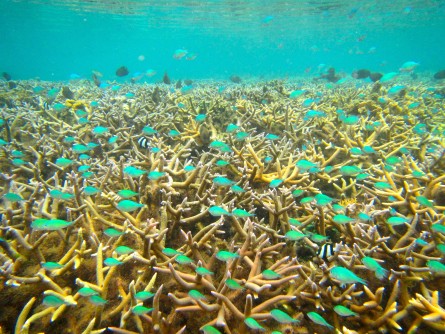 In a study that may sound a new alarm for endangered corals, researchers have found that small community-based marine protected areas may be especially vulnerable to attack by crown-of-thorns sea stars (Acanthaster species) that can devastate coral reefs. The findings, published this week in the journal PLOS ONE, don’t diminish the importance of protected areas, but point to a new threat that may emerge from the degraded areas that often surround healthy ecosystems.

“Successful small marine protected areas are like oases in the desert that may attract the sea stars, which can move tens of meters per day from degraded areas into the more pristine areas,” said Cody Clements, a Georgia Tech graduate student who conducted the research. “One of the potential benefits of marine protected areas was supposed to be protection against these outbreaks, but that didn’t seem to be the case in the areas we studied.”

In the Fiji Islands and other areas of the tropical Pacific, many villages have established marine protected areas where the local residents don’t allow fishing. Protecting the fish helps control seaweeds that harm the coral, a foundation species whose presence helps ensure a healthy ecosystem. Enforcing the ban on fishing depends on community support for protecting the reefs, which are part of the local culture – and can provide economic benefits through tourism and spillover of fish to the areas where harvest is allowed.

The impact of the restored reefs goes beyond the recovered areas, which can contribute coral and fish larvae to help repopulate nearby areas.

These sea stars are natural predators that attack coral by climbing onto reefs and turning their stomachs inside out to digest the coral. Large populations of sea stars can rapidly degrade reefs, consuming healthy coral and causing large-scale coral decline in a matter of weeks.

The protected areas, Clements found, had as many as 3.4 times as many of the pests as the fished areas, and their densities were high enough to be considered Acanthaster sea star outbreaks.

“There seems to be something that is attracting them to the protected areas,” said Clements. “They are picking up on something, but we don’t necessarily know what it is.” The research did not examine chemical cues that may be attracting the sea stars, though other studies have suggested the scent of corals being consumed may draw the crown-of-thorns.

Though the small size of the Fijian protected areas – averaging less than a square kilometer – may be a negative for protecting against the sea stars, they could be a positive in efforts to control the pest. Teams of local residents could capture the predators in periodic harvests to keep populations at lower densities, Hay said.

The animals can hide in the reefs, but their feeding habits usually make them visible. “Once you deal with them enough, you don’t have to see them to know where they are,” said Clements. “You can follow the feeding scars they leave on the coral. Where the scar ends, you know you’ll find one nearby.”

The sea stars are a natural part of the tropical Pacific environment, and outbreaks have been known for years. But there is concern that the densities of the pests and number of outbreaks have been increasing at a time when the coral reefs are more vulnerable.

“Reefs are facing many novel stressors today,” said Clements. “They might have been able to tolerate crown-of-thorns attacks in the past that are too much for them now. There are multiple threats facing coral reef ecosystems, and this doesn’t help.”

Coral conservation efforts can require a decade to show results, and Hay hopes the latest threat will not discourage designation of marine protected areas.

“Our findings do not negate the value of the protected areas, but raise an issue of concern to the people who manage them,” he said. “This looks like a threat that could be accelerating, and we wanted to raise the awareness.”