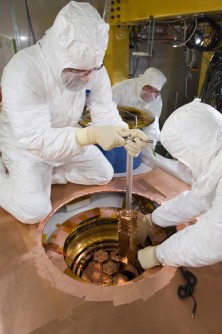 The SuperCDMS experiment at Soudan Underground Laboratory uses five towers like the one shown here to search for dark matter particles. SuperCDMS SNOLAB will consist of 42 modular detectors bundled into seven self-contained towers.

Newswise — Deciphering the nature of dark matter – the mysterious substance that makes up about 85 percent of the matter in the universe yet has never been directly seen – is one of the most important quests in particle physics today. As the lead laboratory in the Department of Energy for the SuperCDMS SNOLAB project, SLAC National Accelerator Laboratory is playing an important role in tracking it down.

The operating SuperCDMS experiment seeks out small amounts of energy deposited by rare interactions between dark and regular matter in a shielded environment 2,340 feet below ground in Minnesota’s Soudan Underground Laboratory. SLAC participates in the operation and data analysis for the SuperCDMS Soudan experiment, and is ramping up for its important role in SuperCDMS Soudan’s successor, SuperCDMS SNOLAB.

SuperCDMS SNOLAB is one of three “next-generation” dark matter experiments recently endorsed by the U.S. Department of Energy, U.S. National Science Foundation and Canada Foundation for Innovation. When it turns on in 2018 at the SNOLAB underground science laboratory near Sudbury, Canada, it will be able to see dark matter particles 10 times lighter than previous searches, particles that deposit astonishingly little energy into detectors. The new experiment will be able to detect these minuscule signals and potentially detect dark matter as it interacts with regular matter.

But there’s a lot that needs to happen before then, and SLAC – working closely with Fermi National Accelerator Laboratory, the University of California, Berkeley, and many other groups around the United States – is helping to lead the way. The new experiment will be substantially improved from the previous ones in design and materials.

“In many ways this is a completely new and different experiment,” said Partridge, who serves as the deputy project scientist for SuperCDMS SNOLAB. “We couldn’t just scale up what we did in Soudan. We’re retooling the whole experiment, reinventing ways of detecting dark matter particles.”

SuperCDMS SNOLAB will consist of 42 modular detectors, cooled almost to absolute zero (approximately 460 degrees below zero Fahrenheit), bundled together with the electronics and wiring into seven self-contained towers. These detector towers will offer unparalleled sensitivity to dark matter particles with masses as small as a proton.

“We’re not only going to be able see lower-mass particles, but we’re also going to be much more sensitive than ever before,” said Partridge. “This is a huge challenge, one that requires much R&D, very careful fabrication, and high-precision testing. SLAC has a big role in all this, but we’re also working closely with many other institutions.”

Individual components for the germanium detectors will be fabricated around the country. For example, Santa Clara University will acquire the germanium crystals that serve as the heart of the SuperCDMS detectors, and Texas A&M will polish them before they’re sent to SLAC to be fabricated into detectors and integrated into towers. The University of Minnesota and UC Berkeley will perform cryogenic testing of the detectors and Caltech, UC Berkeley and the University of Colorado, Denver, will contribute to the cryogenic electronics. Construction, which is slated to begin roughly a year from now, should last about two years.

“To be successful with this exciting new dark matter experiment, it is essential to combine the large project expertise of the national laboratories SLAC and Fermilab with the knowledge base at many universities and other laboratories,” said Stanford Physics Professor Blas Cabrera, who serves as spokesperson for the 21-institution SuperCDMS collaboration.

“Understanding what constitutes dark matter is one of the most important scientific searches of our times, because we know that it is responsible for the galaxies and stars in our universe,” Cabrera continued. “Minuscule clumping in the early universe ultimately led to all of the galaxies, the solar systems within all galaxies, and planets and life itself within solar systems.”