Sleepless in the South: New Study Discovers State and Regional Prevalence of Sleep Issues in the United States 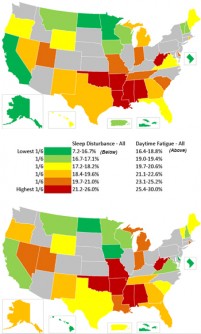 Newswise — PHILADELPHIA – Researchers at the Perelman School of Medicine at the University of Pennsylvania have put sleeplessness on the map - literally. The research team, analyzing nationwide data collected by the Centers for Disease Control and Prevention (CDC), has produced the first state-by-state sleep maps for the United States, revealing that residents of Southern states suffer from the most sleep disturbances and daytime fatigue, while residents on the West Coast report the least amount of problems. The results are published online in the Journal of Clinical Sleep Medicine.

“Sleep disturbance is a major public health concern. However, geographic dispersion of sleep problems, and the factors that may play a role in why some states or regions get better sleep, have been largely unexplored,” said Michael A. Grandner, PhD, research associate at the Center for Sleep and Circadian Neurobiology at Penn and lead author of the study. “Our study generated the first sleep maps for the U.S. that include data on sleep disturbance and daytime fatigue across most of the country.”

The findings suggest that, in general, those in the South are most likely to report sleep disturbance and daytime fatigue, and those in the West are least likely. Of the states where data was collected, Oklahoma, Arkansas, Mississippi, Alabama, and West Virginia ranked in the highest bracket for each category. The researchers note that this finding is consistent with other geographic studies, showing that many of the states that report worse sleep and fatigue problems are the same states that tend to report higher prevalence of other conditions, such as obesity, and that the pattern differed slightly between men and women.

The new study evaluated state-based prevalence of self-reported sleep disturbance and daytime fatigue across 36 U.S. states/ territories using data from 157,319 people who took part in the 2006 Behavioral Risk Factor Surveillance System (BRFSS). The BRFSS is an annual, state-based, random digit-dialed telephone interview survey of adults aged 18 years and older from all over the U.S., conducted by the CDC. It is the world’s largest telephone survey, designed to monitor health-related behaviors in the general population.

The prevalence estimates for each state/territory were based on weighted figures derived from the census, so that every age, sex, and race/ethnicity combination was included relative to how often they were reported in the U.S. census -- helping to ensure that the data accurately reflect the general population. Overall, a pattern was found where some states reported higher prevalence of sleep disturbance and/or daytime fatigue, and that these differences could not be completely accounted for when adjusted for demographics (age, sex, race/ethnicity), socioeconomics (education, income, employment), mental health (depression, general mental health), physical health (general health, overall physical health, healthcare access, obesity), and substance use (alcohol, smoking).

To better understand the sleep patterns, the researchers examined a number of underlying possibilities, such as demographics, obesity, health, and even weather and sunlight patterns in the different states. They determined that regional differences in mental health, race/ethnicity, and access to medical care were the strongest factors that explain these differences.

“The take-home message from this study is that different regions of the country sleep better than others,” said Dr. Grandner. “We should begin to use this data to track patterns of poor sleep and try to understand why these patterns occur. Sleep is such an important part of overall health, we need to do everything we can to help give a good night’s sleep to those in the highest-risk regions.”

Dr. Grandner and his colleagues note that targeted public health campaigns about healthy sleep patterns in states/regions that are most prone to sleep problems and increased screening programs for sleeplessness symptoms may help better guide individuals with sleep issues to medical care.

### Penn Medicine is one of the world's leading academic medical centers, dedicated to the related missions of medical education, biomedical research, and excellence in patient care. Penn Medicine consists of the Raymond and Ruth Perelman School of Medicine at the University of Pennsylvania (founded in 1765 as the nation's first medical school) and the University of Pennsylvania Health System, which together form a $4 billion enterprise.

Penn's Perelman School of Medicine is currently ranked #2 in U.S. News & World Report's survey of research-oriented medical schools and among the top 10 schools for primary care. The School is consistently among the nation's top recipients of funding from the National Institutes of Health, with $507.6 million awarded in the 2010 fiscal year.The University of Pennsylvania Health System's patient care facilities include: The Hospital of the University of Pennsylvania -- recognized as one of the nation's top 10 hospitals by U.S. News & World Report; Penn Presbyterian Medical Center; and Pennsylvania Hospital – the nation's first hospital, founded in 1751. Penn Medicine also includes additional patient care facilities and services throughout the Philadelphia region.