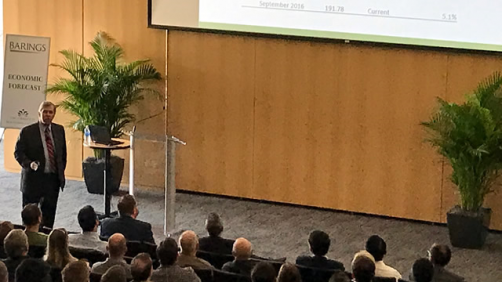 Newswise — CHARLOTTE, N.C. - March 2, 2017 - The national and state economies will continue the slow growth pattern in 2017 that has continued for the past seven-plus years, but North Carolina will need to focus on productivity growth this year, said UNC Charlotte economist John Connaughton today during the Barings/UNC Charlotte Economic Forecast.

“Positive economic growth in 2017 would represent the eighth consecutive year of economic growth for the North Carolina economy. While this is an impressive string of growth, the size of that economic growth has been somewhat lacking. In fact, for most of the 21st Century, both the U.S. and North Carolina economies have been unable to achieve an average 3.0 percent real GDP growth rate that had been fairly consistent since WWII,” Connaughton said. Connaughton emphasized during his quarterly talk that productivity growth should be the focus of the state in 2017.

“There are only two sources of potential GDP growth. The first is labor force growth and the second is productivity growth. During the past five years, we have seen both sources decline substantially. Between 2000 and 2009, the U.S. labor force grew on average by 1.02 percent annually, while productivity grew on average by 2.65 percent annually. This would allow for an average annual potential GDP to grow at 3.67 percent,” he said.

Connaughton said North Carolina’s labor productivity has been flat, indicating that the growth in state GDP has originated from labor force growth.In 2017, the North Carolina economy is expected to increase by an inflation-adjusted rate of 2.3 percent over the 2016 level. This growth in 2017 would follow last year’s projected 2.5 percent real growth in North Carolina GSP. Connaughton said that GDP growth above 3.0 percent will only be possible through productivity growth measures. Productivity growth could be accomplished by increasing investment spending and reducing regulations, he said.

Connaughton presented his quarterly forecast to members of the Charlotte business community and the media at a luncheon held at UNC Charlotte Center City. The Forecast is supported by Barings.

About BaringsBarings is a $271+billion* global asset management firm dedicated to meeting the evolving investment and capital needs of our clients. We build lasting partnerships that leverage our distinctive expertise across traditional and alternative asset classes to deliver innovative solutions and exceptional service. A member of the MassMutual Financial Group, Barings maintains a strong global presence with over 1,700 associates and offices in 17 countries. Learn more at www.barings.com.*As of December 31, 2016.