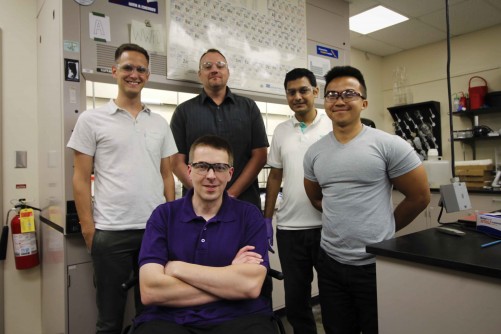 Paul Bracher, Ph.D., assistant professor in the department of chemistry at Saint Louis University, and his research team

Newswise — ST. LOUIS – Paul Bracher, Ph.D., assistant professor in the Department of Chemistry at Saint Louis University, and his research team have been awarded a three-year $597,380 grant from the National Science Foundation (NSF) to study what life might look like on other planets – or, here on earth – if it began in oil.

The SLU team is one of four groups of chemists and biologists across the country involved in the project. Their ideas were generated at an “Ideas Lab” co-sponsored by the NSF and NASA. In a week-long workshop, scientists from a variety of backgrounds and skillsets were sequestered in a remote city in Maryland and charged with developing out-of-the-box ideas about the origin of life.

“In terms of the history of the planet, I think that how life originated has got to be the greatest scientific question we can ask,” Bracher said. “To move from mixtures of chemicals to a living system capable of self-replication and evolution – nothing more interesting has happened than this.”

While life as we know it on Earth relies on chemistry in aqueous environments where water is a solvent, some celestial bodies are covered not with liquid water but with liquid oils. Titan, a moon of the planet Saturn, has lakes of organic hydrocarbons and methane rain.

Were life to develop on oily worlds, the biochemistry of these organisms would have to be different. What molecules could be responsible for storing genetic information? What chemistry could decode genes and synthesize catalysts for biological functions? Those are some of the questions for which the project hopes to provide answers and clues.

“We want to establish the rules of how life might develop and evolve in oil,” Bracher said. “A lot of the chemistry that works in water doesn’t work in organic solvents.” “The premise of our project focuses on places like Titan and exoplanets – planets around distant stars. But it’s also interesting to think if there were a second origin of life on Earth that’s right under our noses, could we recognize it? We’re so focused on life as we know it.”

The SLU team has expertise in physical organic chemistry and will focus on reactions of small molecules, investigating how they might store information, recognize each other, and synthesize copies like nucleic acids and peptides do in modern biology. In addition to advancing the understanding of the circumstances under which life can originate, findings from this study also have the potential to contribute to medicine and industry.

“This is an exciting opportunity for our research team to tackle a challenging and unusual scientific question,” Bracher said. “It’s a high-risk, high-reward effort that could lead to some really interesting new, exotic biochemistry and help figure out what types of life we might find on Titan or exoplanets in distant solar systems. We’re grateful for the support from the NSF and our team is excited to get to work in the lab.”

Saint Louis University is a Catholic, Jesuit institution that values academic excellence, life-changing research, compassionate health care, and a strong commitment to faith and service. Founded in 1818, the University fosters the intellectual and character development of more than 13,500 students on campuses in St. Louis and Madrid, Spain. Building on a legacy of nearly 200 years, Saint Louis University continues to move forward with an unwavering commitment to a higher purpose, a greater good.