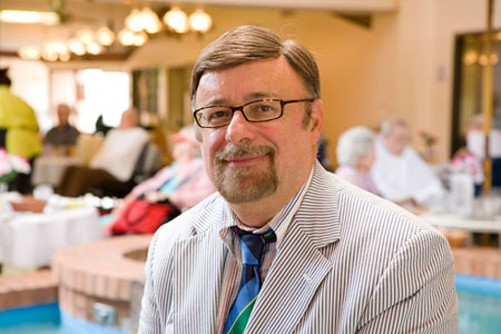 Newswise — ST. LOUIS — Now that the holiday season has concluded, perhaps you’ve noticed the warning signs of Alzheimer’s disease or related dementia in aging family members. George Grossberg, M.D., the Samuel W. Fordyce professor and director of geriatric psychiatry at Saint Louis University School of Medicine, said it is during family gatherings that caregivers often notice older adults 65 and over may be slipping cognitively.

Grossberg, a SLUCare physician, treats geriatric patients who suffer from a range of neurocognitive disorders, including Alzheimer’s disease. He adds that African Americans are among those at the highest risk due to genetics and socioeconomic factors. Health conditions such as cardiovascular disease and diabetes are known to raise the risk for Alzheimer’s disease, and these health conditions are more prevalent in the African American community, he said.

Grossberg walks through the warning signs: memory loss, particularly short-term memory and recall, problems with speech and language, and increasing disorientation or confusion. However, he cautions that symptoms may have other underlying causes like depression, a thyroid abnormality, a vitamin deficiency, or “brain fog” — one of the lingering effects of long COVID-19.

“Over time, ‘brain fog’ should dissipate if that’s the only thing going on,” Grossberg said.

Grossberg said it’s also possible for older adults with significant cognitive reserves to have no symptoms. He adds that Alzheimer’s disease begins to take its toll on the brain 20 or more years before clinical symptoms of dementia appear.

“We’re not advocating adults under 65 get expensive neuroimaging to see if they have early-onset Alzheimer’s disease,” Grossberg said. “We recommend people seek help at the earliest onset of clinical symptoms because often we may find something remediable. The earlier we find it and treat it, the better and higher-level function the person will enjoy.”

Grossberg said a comprehensive Dementia Workup encompasses a variety of tests that can detect the root cause. This includes bloodwork, a specialized brain scan, Spinal Tap, a review of prescribed medications to ensure nothing adversely is impacting memory and cognition, and neuropsychological testing.

Currently, there aren’t interventions to prevent or delay Alzheimer’s disease for high-risk people, but Grossberg said preventative therapies are in the works. Grossberg highlights the services of the Division of Geriatric Psychiatry in the Department of Psychiatry and Behavioral Neuroscience at SLU's School of Medicine. The division provides evaluation and treatment services for older adults with memory or cognitive complaints and their families.

The division also features a Healthy Brain Aging program geared toward at-risk family members who have a loved one with Alzheimer's disease or related dementia. The program helps family members to identify their risk factors for dementia and provides medical advice on how to mitigate these risk factors. Risk factors addressed include cardiovascular, nutritional, lifestyle and genetic.

SLUCare Physician Group is the academic medical practice of Saint Louis University, with more than 500 health care providers and 1,200 staff members in hospitals and medical offices throughout the St. Louis region. SLUCare physicians are among the most highly trained in their fields - more than 50 specialties in all - and are national and international experts, renowned for research and innovations in medicine.