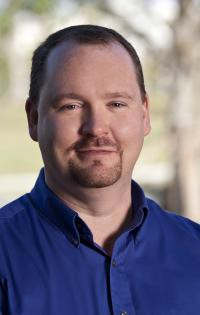 Newswise — ST. LOUIS— In research published in Nature Communications, Thomas Burris, Ph.D., chair of pharmacological and physiological science at Saint Louis University, reports intriguing findings about a small molecule that directs the activity of key “clock proteins,” offering the potential to manage circadian rhythm and treat problems that are associated with its dysfunction, like sleep and anxiety disorders.

Circadian rhythm refers to biological processes that cycle every 24 hours. In mammals, the internal clock that maintains circadian rhythm is essential for normal physiological functions. The rhythms can, however, be disrupted, and dysregulation of circadian rhythm is associated with many disorders, including metabolic disease and neuropsychiatric disorders including bipolar disorder, anxiety, depression, schizophrenia and sleep disorders.

Burris and his colleagues examined compounds that target a protein called REV-ERB, which appears to play a key role in regulating mammals’ internal clocks.

“It has been suggested that REV-ERB is a core component of our clock,” said Burris. “Mice without it are arrhythmic. This study demonstrated that when we give mice a synthetic compound that turns REV-ERB on, it altered their circadian rhythm.”

The team examined effects of the REV-ERB drug on patterns of sleep and wakefulness and found that the compound increases wakefulness, reduces REM and slow-wave sleep, and, notably, decreases anxiety.

The REV-ERB drug, on the other hand, appears to target the clock in a way that is distinct from these common pathways.

Further, the REV-ERB drug appears to be associated with a suppression of reward-seeking behavior.

Drug addiction has a circadian component and mice with mutations in “clock genes” (genes that affect our internal clocks) have altered responsiveness to the reward associated with cocaine, morphine and alcohol. Burris speculates that REV-ERB targeted drug effect on the clock would modulate reward-seeking behavior, and so may be useful in treating addiction.

BOTTOM LINE: The team hypothesizes that targeting components of the mammalian clock with small molecules like REV-ERB drugs may lead to new treatments for sleep disorders and anxiety disorders. It also is possible that REV-ERB drugs may be leveraged to help in the treatment of addiction.