SLU Researchers Receive $416,000 to Further Work Toward Hepatitis B Cure 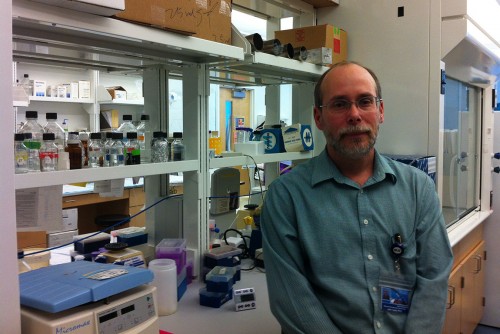 Newswise — With a $416,000 grant from the National Institutes of Health (NIH), SLU scientists will continue work to cure hepatitis B, building on significant findings published in two recent papers.

John Tavis, Ph.D., professor of molecular microbiology and immunology at Saint Louis University, aims to advance our understanding of how the hepatitis B drug replicates in order to develop a new drug that, in combination with other medications, could cure the viral infection.

With the new NIH funding, he will partner with co-principle investigator Marvin Meyers, Ph.D., director of medicinal chemistry for SLU's Center for World Health and Medicine.​ Meyers oversees the synthesis and design of promising new drug leads and their optimization into clinically effective drug molecules.

Experts estimate that up to 350 million people are chronically infected with the hepatitis B virus. Of those infected, about 1 million worldwide die from liver failure and liver cancer each year.

A person who is infected with hepatitis B virus can have billions of viruses per drop of blood. To cure a patient, a drug needs to reduce those levels to zero. Current drugs approved to treat the virus can reduce its numbers, make symptoms disappear for years and push it to the brink of extinction. But for most people, the medications can’t kill the virus completely. As long as any virus remains, it can multiply if medications are stopped.

Because of this, hepatitis B treatment usually spans decades, with costs of $400 to $600 a month, if patients can afford the medication. Expensive and beyond the means of many, patients often do not receive any treatment at all. As a compromise measure, some patients opt to take medication for a short time, staving off for a few years the damage the illness will cause.

The hepatitis B virus replicates by reverse transcription, a process in which viral DNA is converted to RNA and then back to DNA by two vital viral enzymes. Most current drugs work by inhibiting the first of these enzymes. Tavis has focused his efforts on inhibiting the second: ribonuclease H (RNaseH).

Tavis’s team recently published two papers that made significant advances toward this aim: One, published in Antiviral Research, reports the first complete biochemical analysis of the RNaseH enzyme and is key to efforts to screen for a new drug. The second, published in Antimicrobial Agents and Chemotherapy, reports that RNaseH inhibitors work synergistically with the main class of anti-hepatitis B drugs and with each other, as well as additively with a different class of experimental drugs. This means that combining RNaseH inhibitors with existing drugs actually improves how well each drug works.

Together, these papers strengthen the case that RNaseH inhibitors show promise as drug candidates, and that these inhibitors may work in combination with existing drugs.

Tavis notes that U.S. government funding has been key to these advances.

“This research is a result of 25 years of background studies in basic science funded by the NIH,” Tavis said.

With the new grant, Tavis, Meyers and their teams hope to move the science another step closer to a cure.