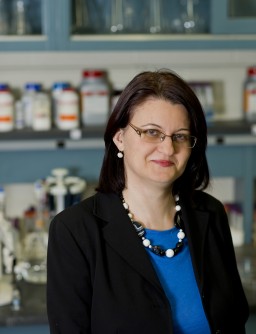 Clarkson University Professor Silvana Andreescu has developed an innovative “smart label” that can that can determine when food or cosmetics spoil.

Newswise — A bite of bad yogurt or sip of spoiled milk could be a thing of the past thanks to a new sensor developed by Clarkson University Professor Silvana Andreescu. The innovative “smart label” is a low-cost, portable, paper-based sensor that can determine when food or cosmetics spoil and has the ability to transform the commercial marketplace.

But how does it work? Through the use of nanostructures, the sensors catch and bind the pre-determined compounds to distinguish change. To test a sample, researchers simply add it to the reactive surface.

How expired the item is can be detected based upon the intensity of the transformation, which is emitted as a color or electrical change. It’s a simple innovation that could tell consumers when the quality of the product changes -- even if the item is past its “best before” date.

“If the target is present, the color or electrical current changes,” says Andreescu, professor of chemistry and biomolecular science and Egon Matijevic Chair of Chemistry. “These changes indicate if the compound is present and in what quantity, and if there are changes in the initial composition.”

The technology took about ten years to develop. Andreescu worked closely with a team of Clarkson students and postdoctoral associates who contributed to the development of the smart label technology through material design, sensing aspects, optimization, testing and prototyping. The final product, says Andreescu, was definitely a team effort.

While initial testing was focused on detecting antioxidants in tea and wine, “this platform technology can be applied many different ways,” says Andreescu, who notes that these first generation sensors are only the beginning.

The team is currently working on their second generation sensors to extend the application range, which include pesticides, adulterants and markers for freshness or spoilage in various stages of testing. Then? “We would really like to get this technology into the hands of consumers and continue to expand it to measure other toxins and pathogens,” says Andreescu.

Andreescu’s research is primarily funded by the National Science Foundation and has sparked the interest of major science and media publications with recent coverage in Food & Wine Magazine and on Futurism.com. Her research was presented on Aug. 21during the 254th National Meeting & Exposition of the American Chemical Society.