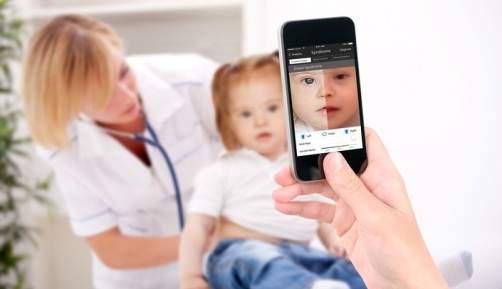 Newswise — With a smartphone and an app, qualified health care professionals can now diagnose fetal alcohol spectrum disorders (FASD) in their office thanks to a suggestion from Omar Rahman, M.D.

Dr. Rahman, who is director of genetic medicine at the Munroe-Meyer Institute at the University of Nebraska Medical Center and an expert in FASD, worked with experts at FDNA, Inc., a Boston-based biotechnology company, on training a system they developed to recognize the alcohol-related disorder.

The app, which can diagnose 300 of the more common genetic disorders is called Face2Gene and uses facial analysis technology, Dr. Rahman said.

In a prior project, Dr. Rahman worked with FDNA, Inc., to help the company train its system to recognize human faces not affected by a genetic disorder. This led to the discussion of using the technology to recognize FASD.

"The system picked up on ARND at a better rate than the clinicians were able to," Dr. Rahman said.

There are subtle differences seen in persons affected by ARND that are difficult for a person to detect but more readily picked up by computer algorithms, he said.

The findings were recently published in the November issue of Pediatrics, the official journal of the American Academy of Pediatrics.

The way the app works is simple, Dr. Rahman said. Once a clinician takes a photograph of the person’s face utilizing the app, the image is transmitted to a secure Health Insurance Portability and Accountability Act (HIPAA) compliant server that calculates ratios of different points of the face. This digitized data is then compared to known digitized syndromes and the results are sent back to the user.

"All of this takes place within 4 seconds," Dr. Rahman said.

The app is just another useful tool for clinicians as they evaluate the whole person and only indicates the likelihood of a genetic abnormality that should be taken in context with other indicators of a particular diagnosis, he said.

Dr. Rahman, who uses the app in his own clinic, said the ultimate goal is to train pediatricians and family physicians how to use the technology.

"This tool can be very helpful for anyone who suspects a genetic abnormality in a child," he said.