‘Smoking Gun’ Ancient Coins Are Being Looted from Excavations — and Too Few Coin Scholars Are Firing Back, Baylor Expert Says

Newswise — Millions of ancient looted coins from archaeological excavations enter the black market yearly, and a Baylor University researcher who has seen plundered sites likens the thefts to stealing “smoking guns” from crime scenes. But those who collect and study coins have been far too reluctant to condemn the unregulated trade, he says.

“Archaeologists are detectives. When something has been taken away from a historical site, the object is divorced from its relationship with other objects, and its utility for the writing of history — much like solving a criminal case — is diminished,” said Nathan Elkins, Ph.D., assistant art professor in Baylor’s College of Arts & Sciences.

Elkins is the staff numismatist at the excavations of an ancient synagogue from the Roman/Byzantine period in Huqoq, Israel. He has written an article, “Investigating the Crime Scene: Looting and Ancient Coins,” that appears in the current issue of Biblical Archaeology Review.

Numismatists — those who study or collect such currency as coins, tokens, paper money and even such trade objects as shells or lambskins — must not condone or, worse, encourage that destructive behavior, Elkins said.

Coins are among objects stolen and sold through the multi-billion-dollar black market in antiquities. The New York Times recently reported looting in Spain and also in Egypt, where looters have taken advantage of political upheaval to steal thousands of objects from unprotected sites and even a national museum. The U.S. market alone imports “hundreds of thousands of earth-encrusted coins annually that are smuggled from Balkan nations such as Bulgaria,” Elkins says.

He saw up close and personal the results of thefts at a site he previously worked — a Roman Empire-era fort in Israel.

“One season we arrived and found one area that had been looted by someone with a metal detector. Pits were dug into the floors and walls, and the soil dug out was greenish, indicating they had removed copper coins and perhaps other metal objects,” he said. “It caused a lot of damage to the site and destroyed information.”

Coins taken in such illegal and secretive excavations and touted with fake histories are easy to find in auction catalogs and online storefronts — and inexpensive to boot, he said. “‘Common’ coins such as these may sell for the price of a fast-food lunch, but they’re invaluable sources to archaeologists and historians,” he said. When discovered beneath floors, foundations or wells, they provide information about how people lived and behaved in the past and can date occupation levels and monuments.

Elkins noted that there is “a widespread demand for biblical coins on account of their associations with Judaism, Christianity and the Bible, which of course exacerbates the looting problem. And the intellectual and material consequences of looting biblical coins are equally severe as that of Roman imperial coins and Greek coins.”

Among such biblical coins are those used to pay temple taxes, tribute coins to Romans rulers and the “widow’s mite,” a small coin of little value mentioned in the Gospel of Mark.

For some coin collectors, obtaining coins of questionable origin is a matter of short-sightedness, he said. The origin and history of a coin may be irrelevant to them if their interest is merely in its image, rarity and method of production.

Some scholars and collectors may be hesitant to question a coin’s background for fear of alienating dealers or other collectors, Elkins said. And, to be fair, some coins are in public or private collections with no recorded history rather than having been illegally obtained and passed off with a fake history, he said.

Elkins said that most collectors have “a genuine passion” for ancient history, but they must be more assertive and conscientious in reporting suspected illegal activity, insisting on the provenance of coins and avoiding giving money to those who buy from looters and smugglers.

Elkins became fascinated with ancient coins as a teen who was interested in Roman history.“Those (coin) images tended to be politicized, commemorating an imperial virtue or referring to a recent military victory, for example,” he said. “As much of the ancient population was illiterate, and the majority of people lived outside of Rome, coins were a primary vehicle for the communication of political ideology in the Roman Empire.

“The study of coins lies at the intersection of multiple fields, including archeology, art history, Classics, ancient history and economics,” Elkins said. “Coins are the ‘smoking guns,’ the definitive evidence — and it’s important to preserve as much evidence as possible.” 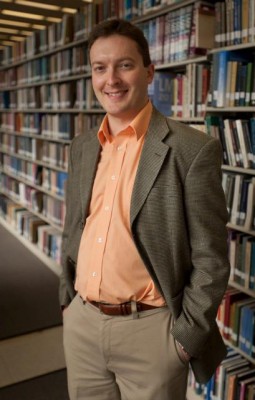