So, what’s all the hubbub with the electric power grid? 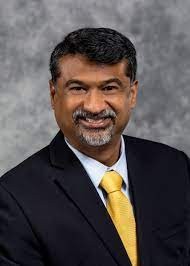 Professor Sid Suryanarayanan, head of the Department of Electrical Engineering and Computer Science at South Dakota State University, has more than two decades of experience researching and studying electric power systems. He holds a Ph.D. in electrical engineering from Arizona State University and has published over 100 peer-reviewed articles.

Newswise — As I write this opinion piece, I am debating whether to turn on my electric kettle to brew a hot cup of tea on this cold winter evening in Brookings, South Dakota. Normally, such small electric loads get lost in the noise level of the ginormous machine that is the grand interconnected electricity grid of the continental United States. But, not today.

Every little kilowatt of rated power that we connect to the grid today matters. This is because the electricity grid of our nation, rightfully called the largest and the most complex man-made machine (think about that for a bit—not the Internet, none of the space shuttles that landed our kind on the moon, or your favorite smart phone), is perpetually in a delicate dance at a mind-boggling timestep of 16.67 milliseconds, set to the metronome of the 60 Hz electrical frequency. This means, the electricity supply from generators must exactly match the electrical demand (plus the transportation losses) at every instant, making electricity the most perishable commodity known to humans.

If the demand or the supply were to exceed the other, then the electricity grid is launched on a path toward a blackout (some of you may remember the Northeast Blackout of August 2003). Unfortunately, we don’t yet have the capabilities to store electric energy at high voltages and large quantities, like in a supersized AA battery, to buffer the unbalances when needed—hopefully, we will get there one day.

As more of the electric supply for our nation is sourced from renewable energy like wind and solar photovoltaic installations, the need to balance the demand and supply becomes imperative. This is because the “fuel” to these renewable power plants are variable and uncertain. The grid uses back-up generators that run on natural gas, in tandem with large wind turbines, and buffer the variability. This worked well until this week in Texas, which relies quite heavily on wind energy for supplying its electricity demand. This week, Texans are reeling under rolling blackouts amidst subzero temperatures. Why? What happened?

To understand what happened in Texas, we must consider at least three things, namely, the Texas electric grid; the wind turbines; and the natural gas contracts. The electricity grid in Texas, like all things Texas, is unique—it is not interconnected with either the eastern or the western grid in the US and is run as a standalone minor interconnection.

If the Texas grid was interconnected to the rest of the nation’s, like South Dakota’s, then the unbalance in demand and supply could be met by wheeling. This is an industry term that refers to the ability to transport electricity via the interconnections to places that have a deficit from areas with a surfeit. Lacking an interconnection, it is like trying to get supplies to a place using a semitruck, but with no access to roads.

Secondly, wind turbines, like airplanes, are subject to icing in cold temperatures. When turbine blades ice over, the wind turbines cannot rotate to produce electric energy. And, de-icing the blades of a wind turbine is not that easy. If we must rely on natural gas to take on this slack due to icing of wind turbines, at significant penetration levels and for long time periods, we need a reliable supply of that fuel.

The Texas situation is not unique; South Dakota’s electric grid, most of which lies in the purview of the Southwest Power Pool (SPP), was faced with warnings and emergency cutbacks of electric energy supply this week.  Nearly 25% and 10% of South Dakota’s electricity supplies are from wind energy and natural gas, respectively. The wild swing of wind energy is not uncommon to the SPP.

Bearing all these mind, we would be remiss not to pursue solutions for the future. There is an urgent need for funding from state, federal, and private sectors for researching, demonstrating, and commercializing technologies that will reduce the impact of such events on the electric grid for South Dakotans. These include secure microgrids, resilient back-up generators, sound market and regulation reforms that will allow the growth of renewable energy in the grid to proceed without hiccups and a dedicated effort to educate our young engineers to understand and tackle these challenges.

Now, I should get back to wondering if I should turn on my kettle.

About the author  Sid Suryanarayanan is the department head and professor of electrical engineering and computer science at South Dakota State University. He has over two decades of experience in researching and studying electric power systems. He holds a Ph.D. in electrical engineering from Arizona State University and has published over 100 peer-reviewed articles in his area of scholarship.