Soccer Heading Worse for Women’s Brains than for Men’s

The video shows areas where microstructural abnormality was associated with heading. The areas in blue indicate where more heading resulted in lower FA, signifying abnormal white matter. The red areas show higher FA, perhaps representing a compensatory response to injury or an effect of training. The study found that regions of lower FA, consistent with damaged brain tissue, were five times more extensive in female soccer players than in males, suggesting that sex-specific guidelines may be warranted for preventing soccer-related head injuries. 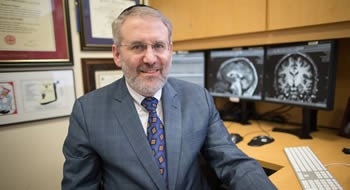 Newswise — July 31, 2018—(Bronx, NY)—Women’s brains are much more vulnerable than men’s to injury from repeated soccer heading, according to a new study by researchers at Albert Einstein College of Medicine, part of Montefiore. The study found that regions of damaged brain tissue were five times more extensive in female soccer players than in males, suggesting that sex-specific guidelines may be warranted for preventing soccer-related head injuries. The results were published online today in Radiology.

"Researchers and clinicians have long noticed that women fare worse following head injury than men, but some have said that’s only because women are more willing to report symptoms," says study leader Michael L. Lipton, M.D., Ph.D., professor of radiology and of psychiatry and behavioral sciences at Einstein and medical director of MRI Services at Montefiore. “Based on our study, which measured objective changes in brain tissue rather than self-reported symptoms, women do seem more likely than men to suffer brain trauma from heading soccer balls.”

About 30 million women and girls play soccer worldwide, according to the International Federation of Association Football, known as FIFA, the international governing body of soccer.

Measuring Brain Changes
In the study, Dr. Lipton and his colleagues performed diffusion tensor imaging (DTI), a form of MRI, on 49 male and 49 female amateur soccer players enrolled in the Einstein Soccer Study. Both groups ranged in age from 18-50 with a median age of 26, and both groups reported a similar number of headings over the previous year (an average of 487 headings for the men and 469 for the women).

DTI detects subtle brain damage by measuring the direction of the diffusion of water in white matter (the deep brain tissue that coordinates communication between brain regions). The more uniform the diffusion of water—measured on a zero-to-one scale called fractional anisotropy (FA)—the better the microstructural integrity of the tissue. Finding a low-FA brain region indicates structural damage to the brain.

Assessment of FA in players’ brains showed that the volume of damaged white matter in women soccer players was five times greater than for male players. The women had eight brain regions where greater levels of heading were associated with lower FA compared with only three regions in men, the study found.

"Our study is larger and more evenly balanced between the sexes than any prior imaging study of sex and brain injury," says lead author Todd G. Rubin, M.S., an M.D.-Ph.D. student in the Translational Neuroimaging Laboratory at Einstein. "The findings add to the growing body of evidence that men and women express distinct biological responses to brain trauma."

Can Players Reduce Risks?
Just why women might be more sensitive to head injury than men isn't known. Researchers speculate that differences in neck strength, sex hormones or genetics could play a role.  The changes in FA were subclinical, meaning they didn’t produce overt clinical findings such as altered thinking ability. But those FA changes are still cause for concern.

"In various brain injuries, including chronic traumatic encephalopathy [a degenerative brain disease found in athletes, military veterans, and others with a history of repetitive brain trauma], subclinical pathology develops before we can detect brain damage that affects function," says Dr. Lipton. "So before serious dysfunction occurs, it's wise to identify risk factors for cumulative brain injury—such as heading if you’re female—so that people can act to prevent further damage and maximize recovery."

For more than a decade, Dr. Lipton has studied the effects of mild brain injury and the cumulative effects of repetitive subconcussive injury on the brains of amateur athletes and combat veterans. He previously found that frequent soccer ball heading is a common and under-recognized cause of concussion symptoms and that worse cognitive function in soccer players stems mainly from frequent ball heading rather than from unintentional head impacts due to collisions.

Should soccer players stop heading?  "We have carried out several studies showing that most players seem to tolerate some level of heading," says Dr. Lipton. "Rather than ban heading altogether—which probably isn’t realistic—we’d like to get a better handle on how many headers will get players into trouble. What is important about this study is that men and women may need to be looked at differently."

Soccer organizations may ultimately want to adopt preventive measures like Pitch Smart, a program sponsored by USA Baseball and Major League Baseball that recommends pitch counts and rest periods for players of different ages, Dr. Lipton suggests. "Limits on pitch counts have dramatically reduced the incidence of upper extremity repetitive stress injuries," he says. "Limiting the number of headers allowed in soccer might have similar benefits in preventing head injuries. But we can’t recommend specific numbers at this point. Fully understanding the risk of heading will take a lot more work."

The study was supported by grants from the National Institute of Neurological Disorders and Stroke (R01 NS082432) and the Dana Foundation. The authors declare no conflicts of interest.

About Albert Einstein College of Medicine
Albert Einstein College of Medicine, part of Montefiore, is one of the nation’s premier centers for research, medical education and clinical investigation. During the 2017-2018 academic year, Einstein is home to 697 M.D. students, 181 Ph.D. students, 108 students in the combined M.D./Ph.D. program, and 265 postdoctoral research fellows. The College of Medicine has more than 1,900 full-time faculty members located on the main campus and at its clinical affiliates. In 2017, Einstein received more than $174 million in awards from the National Institutes of Health (NIH). This includes the funding of major research centers at Einstein in aging, intellectual development disorders, diabetes, cancer, clinical and translational research, liver disease, and AIDS. Other areas where the College of Medicine is concentrating its efforts include developmental brain research, neuroscience, cardiac disease, and initiatives to reduce and eliminate ethnic and racial health disparities. Its partnership with Montefiore, the University Hospital and academic medical center for Einstein, advances clinical and translational research to accelerate the pace at which new discoveries become the treatments and therapies that benefit patients. Einstein runs one of the largest residency and fellowship training programs in the medical and dental professions in the United States through Montefiore and an affiliation network involving hospitals and medical centers in the Bronx, Brooklyn and on Long Island. For more information, please visit www.einstein.yu.edu, read our blog, follow us on Twitter, like us on Facebook, and view us on YouTube.