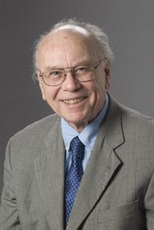 Murray Straus, co-director of the UNH Family Research Laboratory and professor of sociology

Newswise — New research from the University of New Hampshire finds that increased social stress in childhood and young adulthood has a direct link to increased dating violence. Conducted by Murray Straus, co-director of the UNH Family Research Laboratory and professor of sociology, the research is based on a 32-nation study and shows that Taiwan has the highest level of social stress.

The preeminent researcher in his field, Straus presented the new research at the conference on "War, Terrorism, and Social Stress: Impacts on Crime and the Criminal Justice System" at the Institute of Criminology, The Hebrew University, Jerusalem, Monday, May 4, 2009.

"The current economic stress in the United States and around the world is likely to result in more violence, including more physical abuse of children and more violence between partners," Straus says.

Straus studied 14,252 university students from 68 universities in 32 nations in a comprehensive and groundbreaking International Dating Violence Study. He found that the more stress experienced by these students, the greater the probability they had hit a dating, cohabiting, or marital partner.

Specifically, Straus found: "¢ The relation of stress to violence is found around the world, in both developed and developing nations."¢ The relation of stress to hitting a dating partner applies to women hitting a male partner as well as men hitting women."¢ The relation of stress to violence does not depend on the stress being a major traumatic experience such as death of a close family member. Even two or three everyday mild but ongoing stresses, such as being pressured by friends to do things and living in housing that is noisy or run down, are related to an increased probability of violence."¢ The effects of stress experienced in childhood carry over to adulthood. Students who experienced the stress of being spanked or hit a lot parents before age 12 were more likely to hit a dating partner than other students."¢ Childhood stress and current ongoing stresses each makes a separate contribution to explaining violence. The highest rates of violence against a dating partner were found for students who were both spanked and hit a lot as a young child and were also currently experiencing stress. "¢ These results apply to both minor assaults such as slapping or throwing things at a dating partner and to severe assault such as punching or choking a partner."¢ The relationship of stress to violence applies to nation-to-nation differences as well as differences between individual persons. Straus found that nations that are high in the average level of ongoing stressful conditions, and nations where a high percent of students who were spanked or hit a lot before age 12, tend to be nations with a high percent of students who hit a dating partner.

Straus is a pioneer in the area of intimate partner violence. He holds a Ph.D. in sociology from the University of Wisconsin, and is founder and co-director of the Family Research Lab at the University of New Hampshire. He is the author or co-author of more than 200 research articles and 15 books, including "Understanding Partner Violence" (National Council on Family Relations, 1995), "Intimate Violence: The Causes and Consequences of Abuse in the American Family" (Simon and Schuster, 1988), and "The Social Causes of Husband-Wife Violence" (University of Minnesota Press, 1980). Much of his research can be downloaded from http://pubpages.unh.edu/~mas2.

The University of New Hampshire, founded in 1866, is a world-class public research university with the feel of a New England liberal arts college. A land, sea and space-grant university, UNH is the state's flagship public institution, enrolling 11,800 undergraduate and 2,400 graduate students.

â€œWar, Terrorism, and Social Stress: Impacts on Crime and the Criminal Justice Systemâ€ at the Institute of Criminology, The Hebrew University, Jerusalem, Monday, May 4, 2009