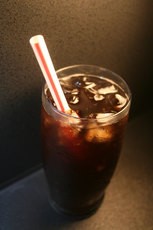 New evidence suggests that sodas sweetened with high-fructose corn syrup may increase the risk of diabetes, particularly in children.

Newswise — Researchers have found new evidence that soft drinks sweetened with high-fructose corn syrup (HFCS) may contribute to the development of diabetes, particularly in children. In a laboratory study of commonly consumed carbonated beverages, the scientists found that drinks containing the syrup had high levels of reactive compounds that have been shown by others to have the potential to trigger cell and tissue damage that could cause the disease, which is at epidemic levels. They reported here today at the 234th national meeting of the American Chemical Society.

HFCS is a sweetener found in many foods and beverages, including non-diet soda pop, baked goods, and condiments. It is has become the sweetener of choice for many food manufacturers because it is considered more economical, sweeter and more easy to blend into beverages than table sugar. Some researchers have suggested that high-fructose corn syrup may contribute to an increased risk of diabetes as well as obesity, a claim which the food industry disputes. Until now, little laboratory evidence has been available on the topic.

In the current study, Chi-Tang Ho, Ph.D., conducted chemical tests among 11 different carbonated soft drinks containing HFCS. He found 'astonishingly high' levels of reactive carbonyls in those beverages. These undesirable and highly-reactive compounds associated with "unbound" fructose and glucose molecules are believed to cause tissue damage, says Ho, a professor of food science at Rutgers University in New Brunswick, N.J. By contrast, reactive carbonyls are not present in table sugar, whose fructose and glucose components are "bound" and chemically stable, the researcher notes.

"People consume too much high-fructose corn syrup in this country," says Ho. "It's in way too many food and drink products and there's growing evidence that it's bad for you." The tea-derived supplement provides a promising way to counter its potentially toxic effects, especially in children who consume a lot of carbonated beverages, he says.

But eliminating or reducing consumption of HFCS is preferable, the researchers note. They are currently exploring the chemical mechanisms by which tea appears to neutralize the reactivity of the syrup.

In the future, food and drink manufacturers could reduce concerns about HFCS by adding more EGCG, using less HFCS, or replacing the syrup with alternatives such as regular table sugar, Ho and his associates say. Funding for this study was provided by the Center for Advanced Food Technology of Rutgers University. Other researchers involved in the study include Chih-Yu Lo, Ph.D.; Shiming Li, Ph.D.; Di Tan, Ph.D.; and Yu Wang, a doctoral student.

ALL PAPERS ARE EMBARGOED UNTIL DATE AND TIME OF PRESENTATION, UNLESS OTHERWISE NOTED

The paper on this research, AGFD 232, will be presented at 9:45 AM, Thursday, 23 August 2007, during the symposium, "Food Bioactives and Nutraceuticals: Production, Chemistry, Analysis and Health Effects."

High fructose corn syrup (HFCS) has been added in various foods and beverages in these three decades. Many epidemic studies have discussed about the large consumption of sugars, such as fructose, sucrose and sweeteners. In our study, reactive carbonyl species (RCS) such as glyoxal (GO), methylglyoxal (MGO) and 3-deoxyglucosone (3-DOG) were detected by their corresponding quinoxaline derivatives using HPLC-UV method in HFCS carbonated soft drinks. From the comparison of HFCS and non-HFCS (diet) carbonated soft drink, it is an apparent conclusion that HFCS is the major source of RCS found in beverages. 5-(Hydroxymethyl)-2-furfural (5-HMF) is detected in HFCS by GC-FID method. The presence of 3-DOG and acid condition is a favorable condition for the production of 5-HMF. The variations of RCS and 5-HMF in the HFCS beverage with addition of epigallocatechin gallate (EGCG) during storage have been further explored.