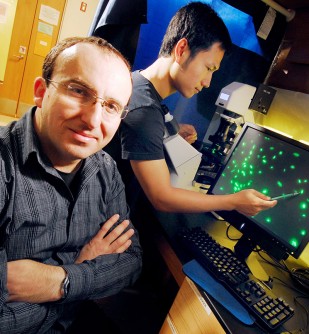 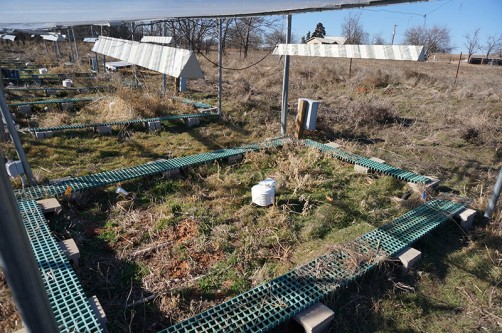 Mengting Yuan, U. of Oklahoma

Soil plots that were heated to simulate the rise in temperatures forecast by climate models. The radiators (top) warm the plots 2 degrees Celsius.

Newswise — As scientists forecast the impacts of climate change, one missing piece of the puzzle is what will happen to the carbon in the soil and the microbes that control the fate of this carbon as the planet warms.

Scientists studying grasslands in Oklahoma have discovered that an increase of 2 degrees Celsius in the air temperature above the soil creates significant changes to the microbial ecosystem underground. Compared to a control group with no warming, plants in the warmer plots grew faster and higher, which put more carbon into the soil as the plants senesce. The microbial ecosystem responded by altering its DNA to enhance the ability to handle the excess carbon.

“What we conclude from this study is the warming has an effect on the soil ecosystem,” said Kostas Konstantinidis, an assistant professor who holds the Carlton S. Wilder Chair in Environmental Engineering at the Georgia Institute of Technology. “It does appear that the microbes change genetically to take advantage of the opportunity given to them.”

The study was published online Dec. 27, 2013, in the journal Applied and Environmental Microbiology. The research was sponsored by the Department of Energy, and involved collaboration with several universities, including the University of Oklahoma.

The findings are the culmination of a 10-year study that seeks to understand how the most intricate ecosystem in nature — soil — will respond to climate change.

A single gram of soil is home to a billion bacterial cells, representing at least 4,000 different species. In comparison, the human gut is home to at least 10 times fewer different species of bacteria. Scientists have little idea what microbes in the soil do, how they do it, or how they respond to changes in their environment, Konstantinidis said. This limits the predictive capabilities of climate models.

The researchers traveled to the Kessler Farm Field Laboratory in McClain County, Oklahoma, where they conducted their study on grassland soils, which had been abandoned for agriculture use for more than 20 years. The scientists warmed plots of soil with radiators set a few feet above the ground for 10 consecutive years. They warmed these plots 2 degrees Celsius, which many climate models forecast as the global temperature increase over the next 50 years.

The researchers took samples of the plants, measured the carbon content and the number of microbes in the soil, and documented any changes in the warm plots versus the control plots. The team also extracted DNA from the soil and identified the genetic composition and changes of the microbes living there.

The plants in the warm plots grew better and higher. As the plants started senescing at the end of the season, their higher biomass led to more carbon in the soil. However, the microbial communities had increased their rate of respiration, which converted soil organic carbon to carbon dioxide (CO2), so the total carbon in the warm and control soils was similar.

“That was consistent with the idea that the additional carbon from the plants was all respired and converted to CO2,” Konstantinidis said. “We saw that the warmed microbial community was more efficient in eating up the plant-derived soil carbon and making it CO2.”

The research team plans to do similar studies in other agricultural soils and in colder areas, such as Alaska tundra permafrost ecosystems, where there is more organic carbon in the soil.

“There are complex interactions between plants and microbes and we need to understand them better to have a more predictive understanding of what’s going on,” Konstantinidis said. “This is the first study trying to do that, but we are not close to the complete understanding yet.”

This research is supported by the Department of Energy under award number DE-SC0004601.Any conclusions or opinions are those of the authors and do not necessarily represent the official views of the DOE.CITATION: Chengwei Luo, et al., "Soil microbial community responses to a decade of warming as revealed by comparative metagenomics," (Applied and Environmental Microbiology, January 2013). (http://dx.doi.org/10.1128/AEM.03712-13). 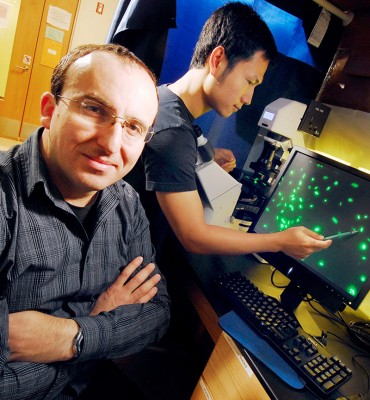 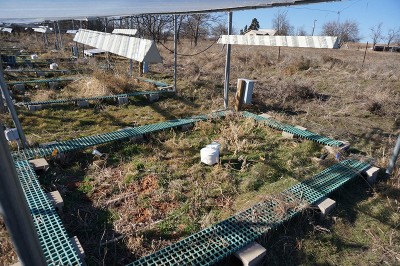 Credit: Mengting Yuan, U. of Oklahoma

Caption: Soil plots that were heated to simulate the rise in temperatures forecast by climate models. The radiators (top) warm the plots 2 degrees Celsius.